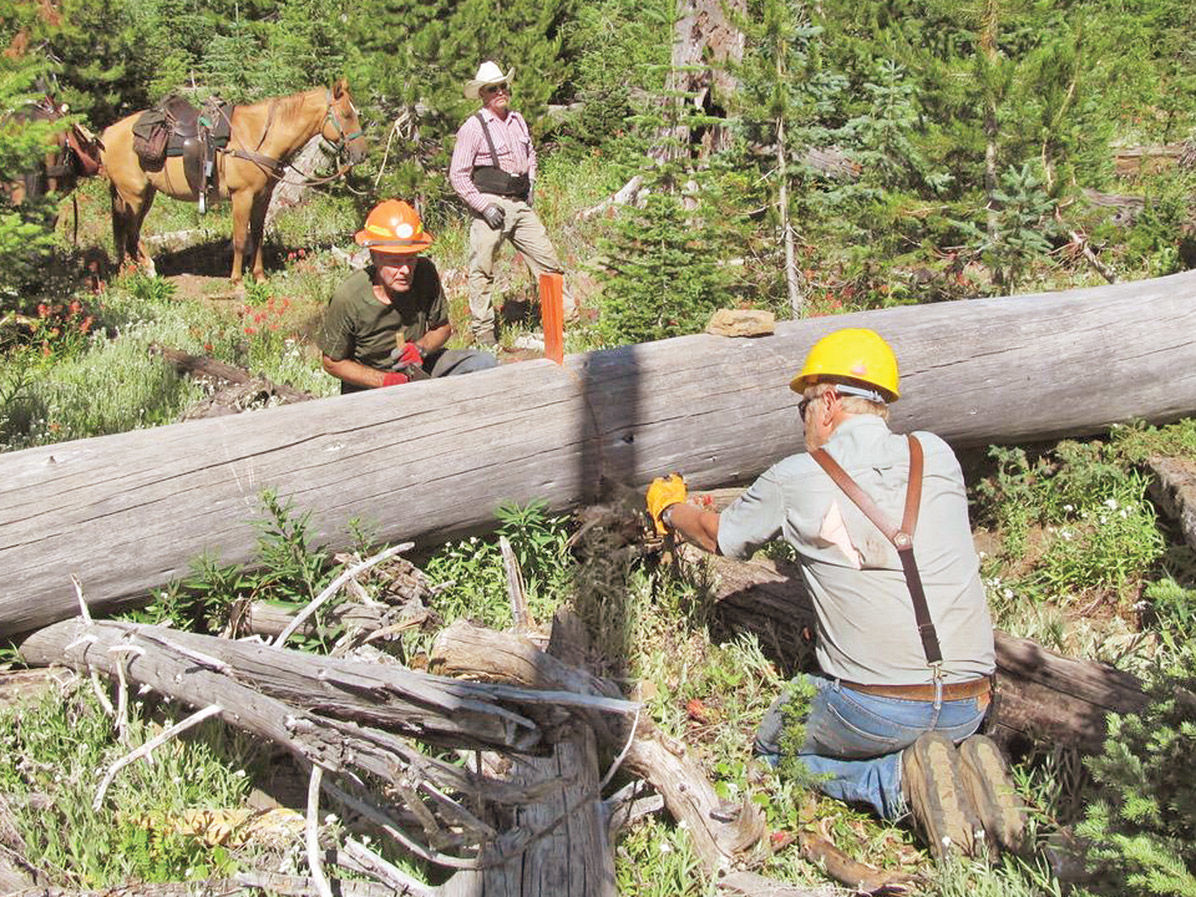 Russ West, left, and Jim Akenson saw through a log on the Dobbin Creek trail in the Eagle Cap Wilderness, with John Hollenbeak looking on. 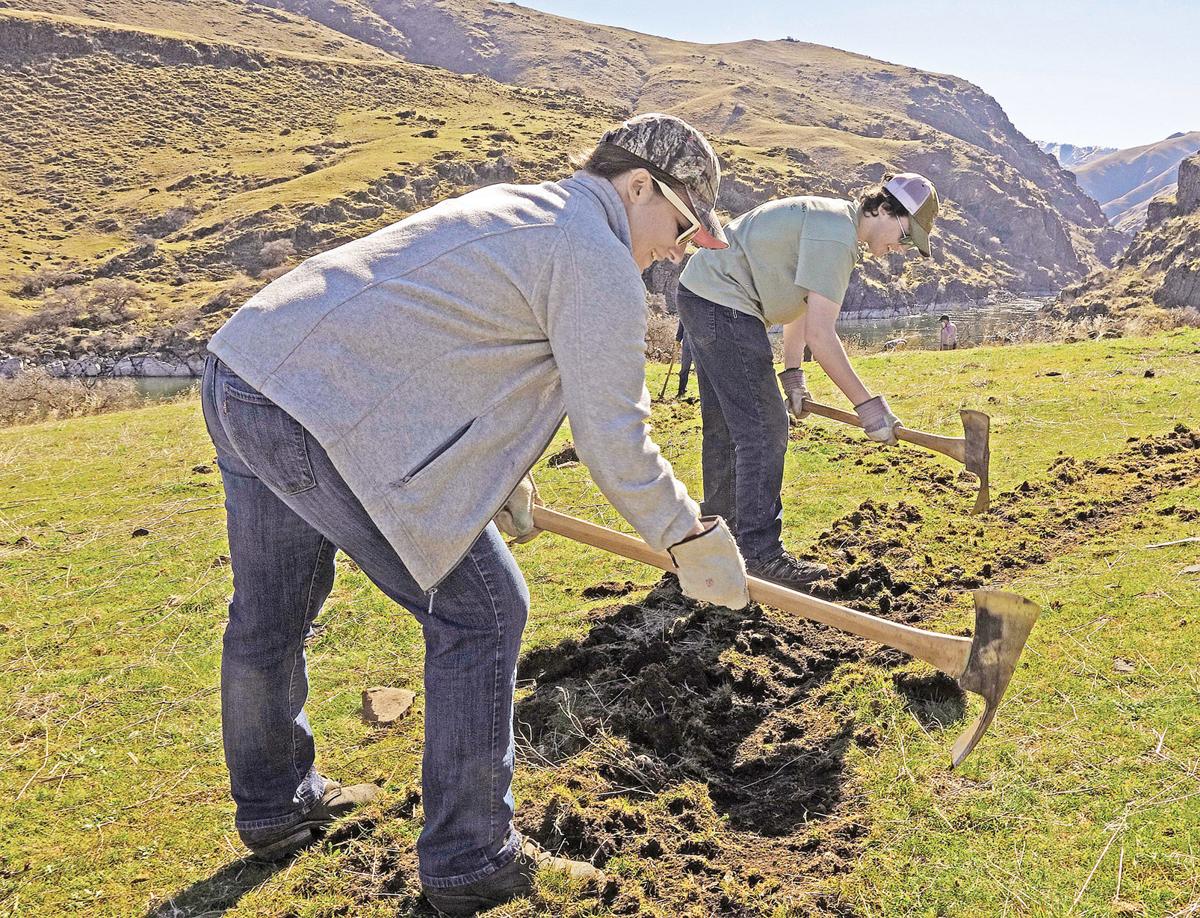 Russ West, left, and Jim Akenson saw through a log on the Dobbin Creek trail in the Eagle Cap Wilderness, with John Hollenbeak looking on.

There are millions of trees in the Wallowa Mountains but sometimes it only takes one to stop a bunch of Boy Scouts.

Russ West has seen that tree.

He has in fact sawed through it, although not without a certain amount of trouble, including having to fashion a wedge from a sapling to extract the saw blade.

In any case West has a keen understanding of the effort needed to keep trails in the Wallowas, and other wild country in Northeastern Oregon, accessible to hikers and to horseback riders.

His own experiences over four decades of backpacking and riding horses, especially in the Eagle Cap Wilderness, served as motivation for West to join the Wallowa Mountains Hells Canyon Trails Association.

This group of volunteers, since forming in early 2017, have donated more than 5,600 hours of toil and cut through around 2,000 trees that had crashed across a trail.

The organization, which coordinates with the Forest Service and with other volunteers, including the Blue Mountain Backcountry Horsemen, has cleared logs and brush from 240 miles of trail in three years.

“I just love the wilderness and want to do what I can to keep the trails open,” said West, 66, who retired in 2018 after serving for 15 years as Union County Circuit Court judge and 18 years as the county’s district attorney.

Over his years exploring the Eagle Cap, Oregon’s largest wilderness at 365,000 and with a trail network exceeding 500 miles, West has seen the effects of declining trail maintenance budgets for the Wallowa-Whitman National Forest, which manages the wilderness.

“The Forest Service hasn’t been able to keep up,” said West, who worked for the agency as a smokejumper firefighter for five years.

And as West’s struggle with that lone log while leading a 50-mile Boy Scout backpacking trip illustrates, a trail left to nature for even a few years can become all but impassable.

(That log was a good 2 feet through the middle, West said, and it fell across a steep section of the Lower Minam trail where a detour wasn’t possible.)

But West is optimistic that the Trails Association, building on the work of groups such as the Blue Mountain Backcountry Horseman, is making a tangible difference for hikers and equestrians.

“I think we’re making a dent,” he said. “We’ve done a lot, but the problem is it’s a never-ending problem.”

The Trails Association welcomes everyone, asking only for a $20 membership fee.

The Trails Association has more than 40 members.

West said he’d like to see that number grow — and see the group’s geographic range spread.

That’s one of the purposes of a planning meeting Tuesday, Feb. 18, at 5:30 p.m. in the Colleen Johnson Meeting Room at the Cook Memorial Library, 2006 Fourth St. in La Grande.

West said the group would like to schedule trail work trips this summer in the Elkhorns.

Working with the Forest Service, the Trails Association supplies training as well as equipment, including the crosscut saws used in wilderness areas. Chain saws are allowed outside wilderness areas, including much of the Elkhorns.

“We want to supplement what the Forest Service is doing, not supplant it,” West said. “I think we’re making a significant contribution to trail maintenance.”

We continue to develop partnerships and volunteer opportunities to help maintain trails and facilities in these areas, and the Wallowa Mountains Hells Canyon Trail Association plays a valuable role,” Wall said. “We’re excited to see their growing ranks and on-the-ground accomplishments, and we’re looking forward to another successful field season together.”