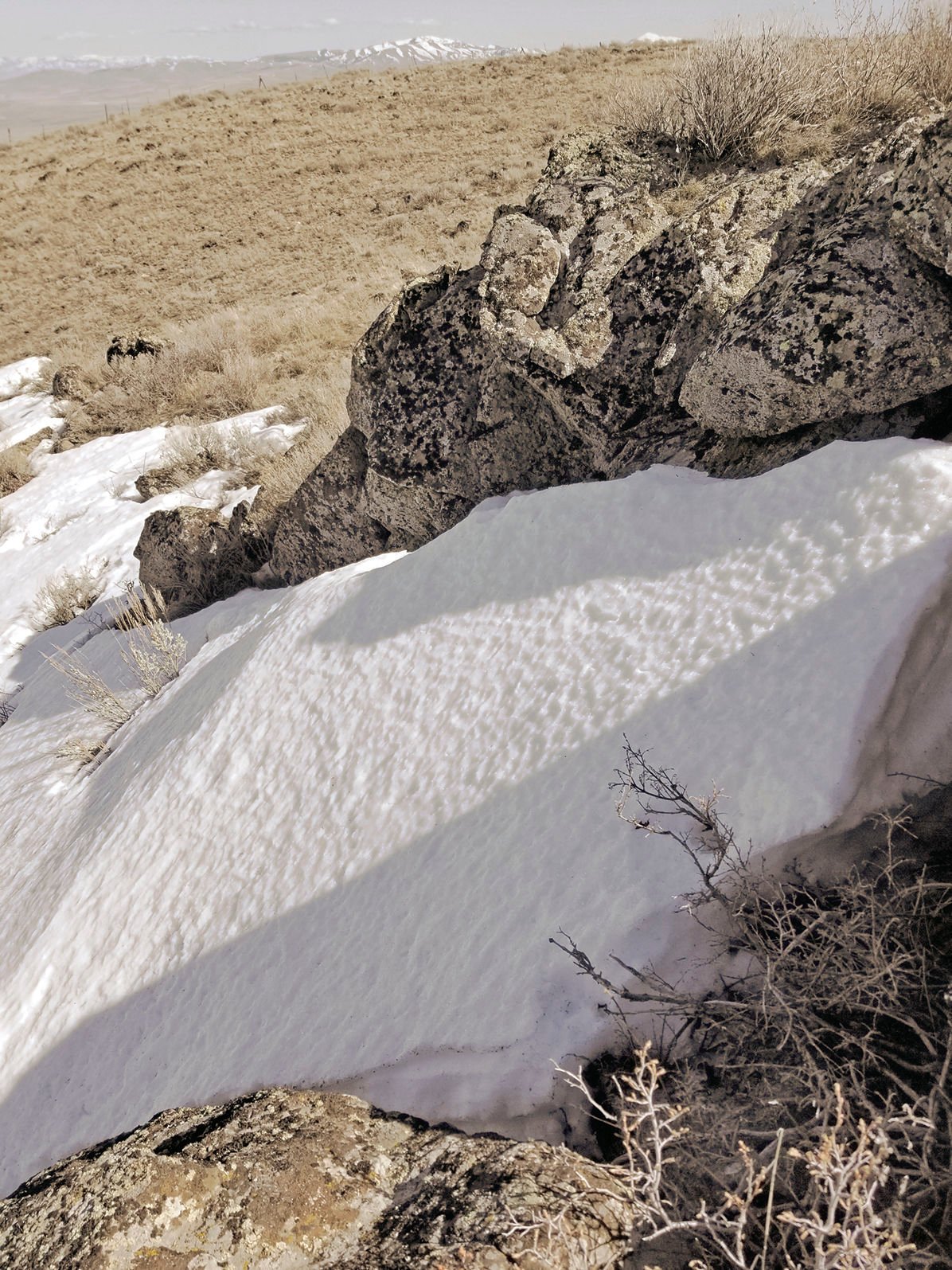 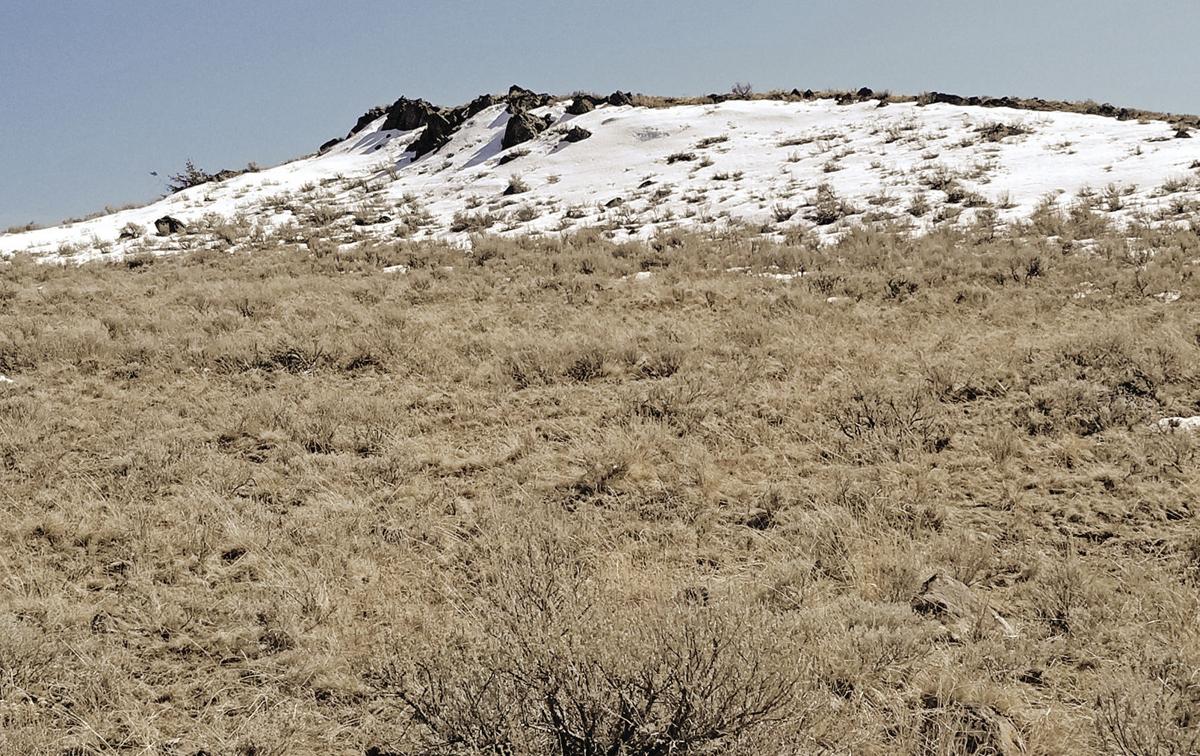 When most of the rest of the arid sagelands of eastern Baker County are dry and brown, strips of snow still linger on the leeward side of ridges.

When most of the rest of the arid sagelands of eastern Baker County are dry and brown, strips of snow still linger on the leeward side of ridges.

My right boot puffed dust and my left sunk into grainy snow of the sort that’s usually squeezed into a paper cup and slathered with intensely sweet syrup that turns your tongue an artificially bright color.

Spring is a season of transition, of course, when wildflowers erupt sometimes from a damp patch vacated by a snowdrift just hours before.

But in the sagebrush country that sprawls east of Baker City to the Snake River and well into Idaho, spring spawns some curious creations, including what I call the desert glaciers.

These are in fact neither glaciers — there are none in Eastern Oregon — nor the trying-hard-to-be-glaciers known as perpetual snowfields, of which there are many in the Wallowas.

Indeed these patches of snow will disappear, most of them, during April, weeks before the ridges and peaks of our great high ranges, such as the Elkhorns and the Wallowas, have begun to shed their annual white burden.

I bestowed the somewhat misleading name on these seasonal features because, in common with glaciers, they remain frozen when the rest of the previous winter’s snow has trickled away.

They just don’t have the staying power of a true glacier, which forms only over decades as the weight of accumulated snow squeezes out the air and compresses the snow into malleable ice that flows, as a river does, albeit at a much more leisurely pace.

The desert glaciers reflect both the local topography and our position on the globe.

They form on the north side of ridges that run east-west — the leeward side, given the prevailing winter winds.

Snow, of course, tends to drift when it has something to pile up against or, as with desert glaciers, wind-propelled snow suddenly loses its momentum on the relatively sheltered side of an elevated chunk of ground.

The slackening wind loses its grip on the snow, which sifts down to the ground, like flour into a mixing bowl.

Sometimes, particularly in higher mountains where blizzards are common, this confluence creates cornices — rolls of snow that look like nothing so much as an ocean wave that has frozen just as it begins to break.

Cornices can be dangerous as well as beautiful.

Many mountaineers have plunged to their death by stepping onto a cornice, thinking there was solid stone beneath their boots rather a mere scrim of snow over a yawning chasm of empty air.

Cornices can build to a prodigious scale given the proper conditions — the Wallowas, for instance, are rife with towering cornices.

A notable example that’s conspicuous from much of Baker City is the cornice that forms every winter on the crest of Elkhorn Ridge at Marble Creek Pass, a notch in the sedimentary wall that separates the Baker and Sumpter valleys. The cornice at Marble Creek Pass can rise more than 10 feet above the slope below, and by midwinter it typically casts a shadow that’s discernible, from Baker City, to the naked eye.

Our latitude also contributes to the formation of desert glaciers.

The relatively low sun angle at our position, midway between the equator and the North Pole, means the north-facing clefts where snow collects are sheltered from sunlight just as they are from wind gusts.

Desert glaciers are common across Eastern Oregon, a region hardly deficient in ridges.

I can see one from my driveway. This desert glacier is in the Oregon Trail country a couple miles east of Interstate 84, and it’s long been a bellwether for me in gauging the sometimes sluggish progress of spring.

(Just the other morning a fresh fall of snow temporarily hid this particular desert glacier, turning the entire hillside white and thus erasing the contrast.)

But my favorite vantage point is from Ruckles Creek Road through Virtue Flat, near the Oregon Trail Interpretive Center.

Just south of this sagebrush basin, a spine of high ground extends from Little Lookout Mountain, more than 10 miles to the east, all the way to Baker City, where the western end is Spring Garden Hill, inside the city limits.

(The builders of Interstate 84 hacked a grade through this ridgeline; it’s the hill that climbs south from the Campbell Street interchange.)

This elevated area isn’t a single ridge but rather a series of interconnected humps. Because most trend east-west this is a perfect palette for desert glaciers.

Over the millennia the seasonal trickle of water from these snowdrifts has carved shallow concave gouges that perpetuate the cycle by further protecting the ground from sunlight.

By mid March of most years, if you drive Ruckles Creek Road you’ll see to the south a rumpled brown topography punctuated by stripes of white. These remind me, curiously, of something black — the stuff ballplayers slather below their eyes to cut the sun’s glare.

Hiking to a few desert glaciers is a rite of spring for me. I find eternally fascinating the incongruity of such scenes, these tiny damp tableaus in a land where moisture of any sort is conspicuous by its rarity.