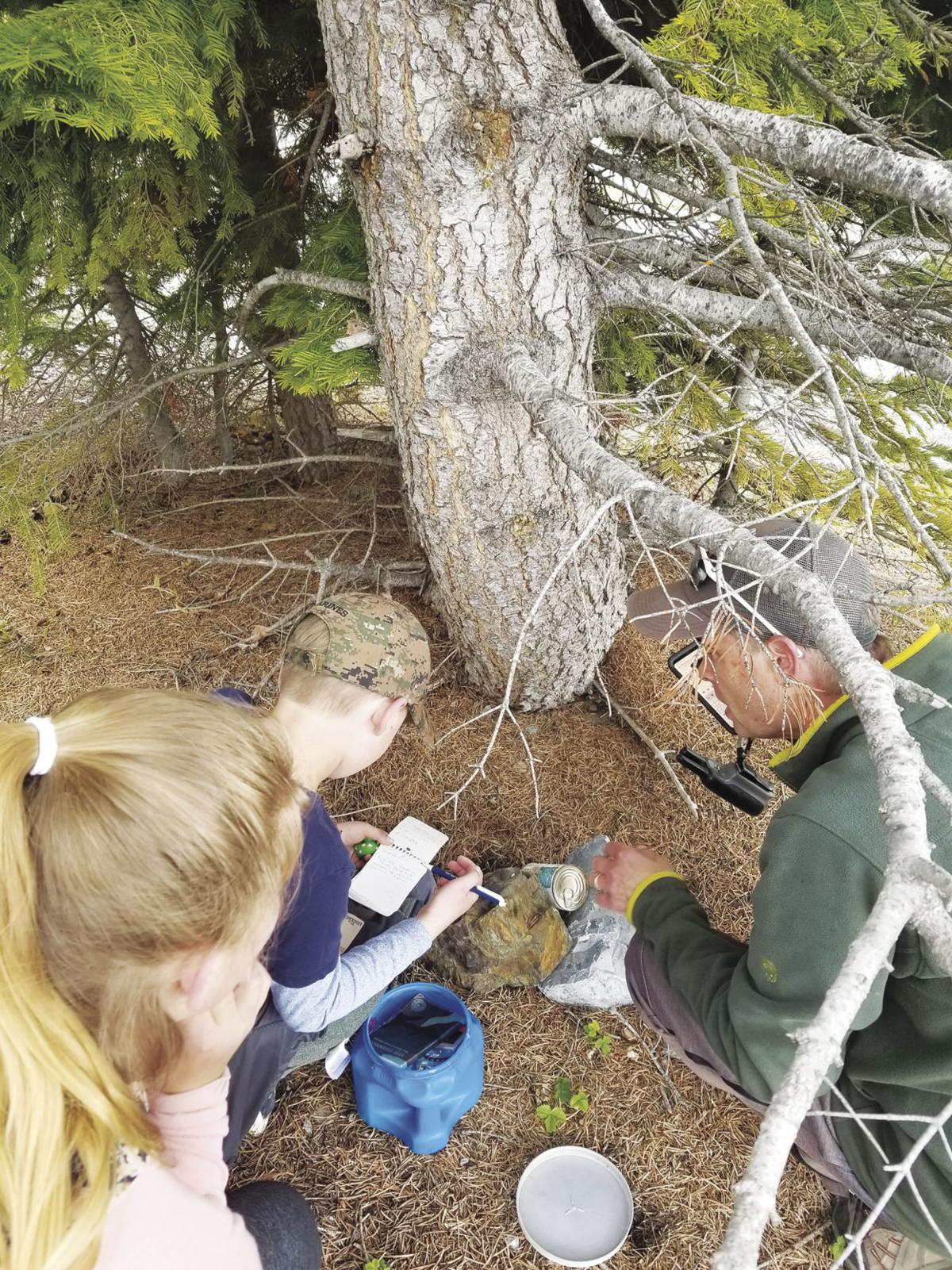 Once you’ve found a geocache you need to sign the register to prove you were actually there. 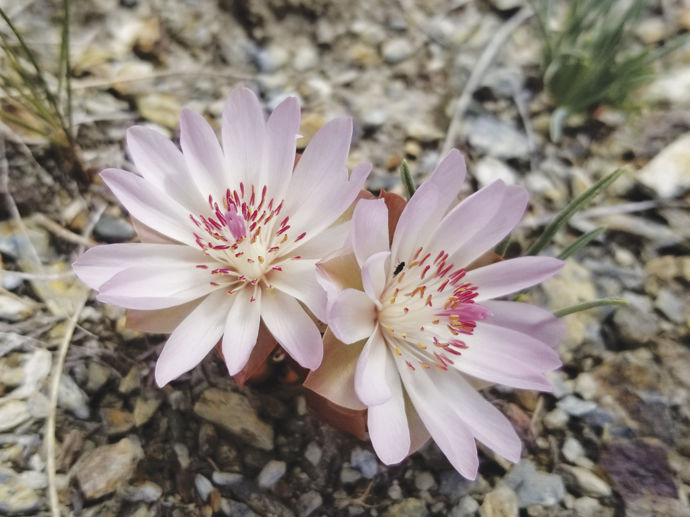 The blooming bitterroot looks delicate, but the plant is hardy, usually growing in rocky areas with little soil. This one was blossoming in the middle of a road. 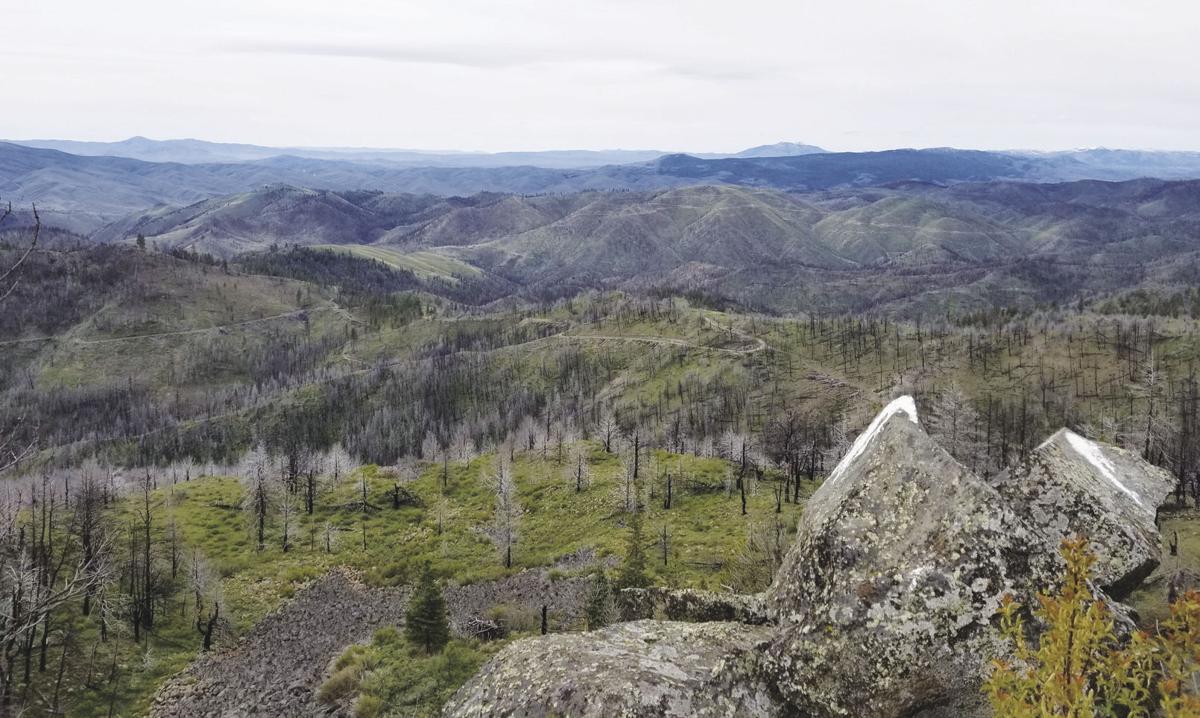 The view south from Stump Spring Butte takes in tens of thousands of acres scarred by wildfires over the past 30 years or so. The dead trees in the foreground were scorched during the Cornet-Windy Ridge fire in August 2015. Some areas farther south were burned in the Dooley Mountain fire of 1989. The two fires’ boundaries also overlapped in places. 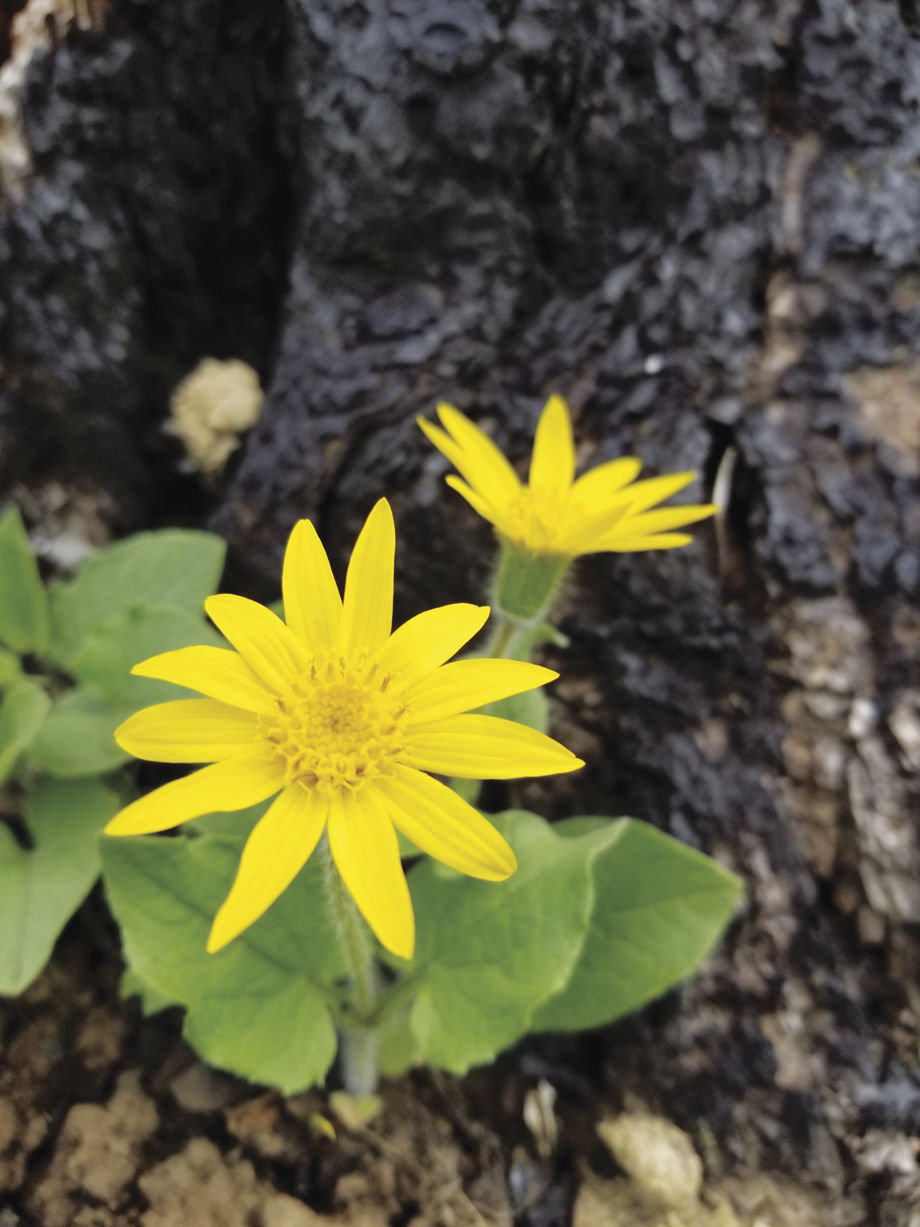 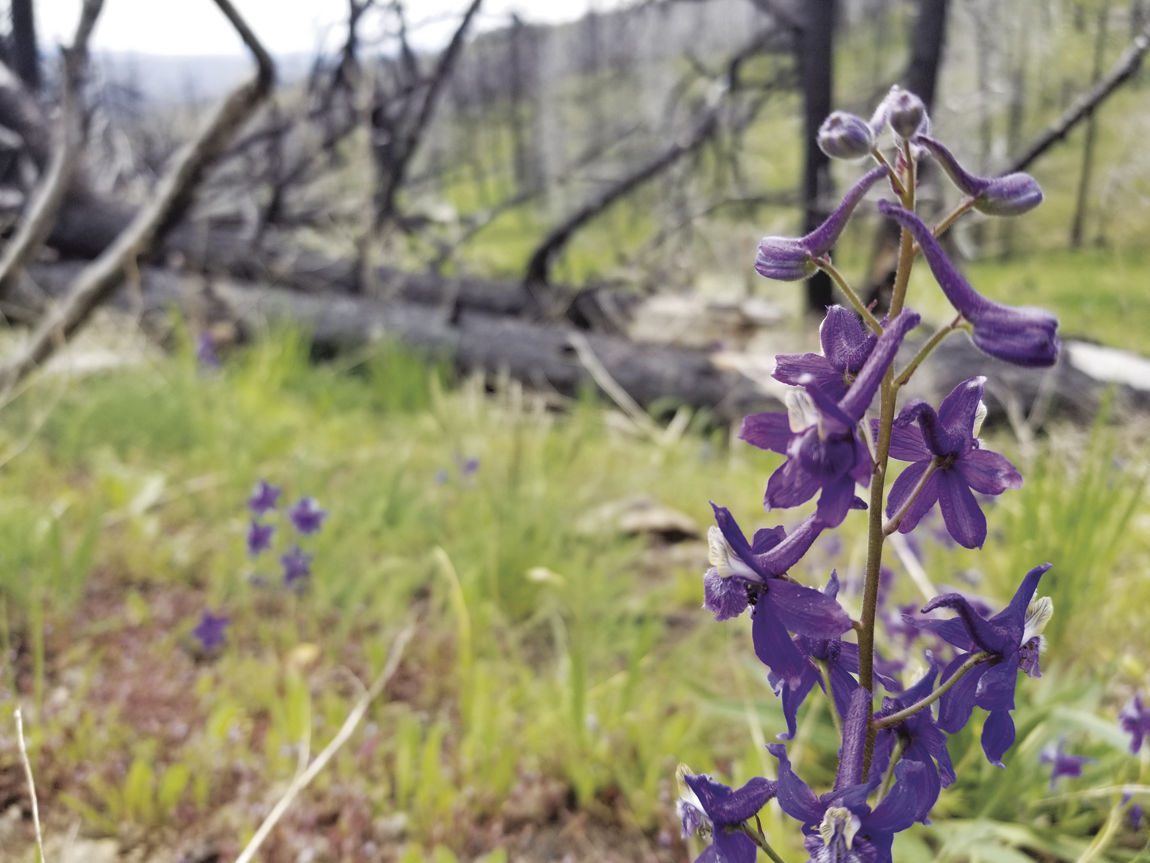 Once you’ve found a geocache you need to sign the register to prove you were actually there.

The view south from Stump Spring Butte takes in tens of thousands of acres scarred by wildfires over the past 30 years or so. The dead trees in the foreground were scorched during the Cornet-Windy Ridge fire in August 2015. Some areas farther south were burned in the Dooley Mountain fire of 1989. The two fires’ boundaries also overlapped in places.

I don’t think I’m especially gullible but recently I spent the better part of an hour nosing into the nooks and crannies on a lonely mountaintop, searching for something based solely on advice I read on the internet.

Searching, and not finding.

Not finding what was supposed to be there according to my online advisers, anyway.

We did find a couple of morels.

And many clumps of colorful wildflowers.

And I found a fire-blackened branch set at just the right elevation to slash a pair of parallel gashes in my right calf as I blundered past.

(Another symptom of my gullibility is that I wear shorts when hiking through fire-scarred forests in mid-May.)

What we didn’t find is the item that lured me, along with my wife, Lisa, and our kids, Max and Olivia, to Stump Spring Butte on the divide between the Burnt and Powder rivers southeast of Baker City.

Or as I prefer to call it, the alleged geocache.

Max is the lone holdout, and I believe he would, if given the chance, be up there yet, peering into the recesses between the jumbled boulders that make up the top of the butte, which is more of a plateau than a pinnacle.

Max, who is 9, certainly is the most enthusiastic geocacher in our family.

Indeed he introduced the rest of us to the hobby.

We were all aware of geocaching, to be sure, and understood the basic concept of using GPS — the Global Positioning System, an extremely accurate way of navigating by signals from orbiting satellites — to find hidden caches of small, often whimsical, items.

Basically it’s a high-tech treasure hunt in which finders are encouraged to swap one small treasure for another — a marble for a tiny stuffed animal, maybe.

But it wasn’t until Max became entranced by geocaching that we incorporated searches into our regular weekend hiking excursions.

Max, as many boys do who are years away from being able to drive, has a sense of curiosity that’s both catholic and intense. Just lately his two obsessions — or at least the two that occupy most of his (and his parents’) time — are geocaching and microscopes.

He recently acquired a portable microscope that allows him to pursue both interests simultaneously.

There is of course an app for geocaching.

Actually there are probably dozens of geocaching apps, but the one Max downloaded onto his mother’s phone is the one we employed on the Saturday we drove to Stump Spring Butte.

My initial plan was to hike the road that follows the spine of Windy Ridge toward the Burnt River.

But Max insisted that I check the app for nearby geocaches, and sure enough there was a bright green icon on Stump Spring Butte, less than a mile from Windy Ridge.

Much too close, and convenient, to bypass, in other words.

We headed to the butte first.

I had climbed to the top, where a fire lookout once stood, but that was years before the Cornet-Windy Ridge fire swept through in August 2015.

The fire, and subsequent salvage logging, had so changed the landscape that I scarcely recognized the area. Or at least that was my excuse when I drove past an important junction and Lisa had to set me straight by consulting the geocache app, which also has a detailed map showing roads.

A road gets to within a half-mile or so of the summit, so it didn’t take us long to reach the boulders and start looking for what the geocache’s creator described as a “camo lockbox.”

I was a trifle worried by the “camo” part, what with the purpose of camouflage being to make sure something is not found.

Nor was I encouraged by the lack of specificity in the ostensible location of the geocache.

It was described as being “near” the site of the lookout but that was no help at all because there’s nothing — no crumbling foundation blocks, no weathered boards — to indicate where the building stood.

Ray Kresek, who wrote a fine book about fire lookouts in Oregon and Washington, determined through his research that the 32-foot tower on the butte was built in 1934 and “destroyed” in 1963.

I can’t say how thorough those assigned the destruction were in their efforts, but it appears that any recognizable remnants which might have survived the 1963 purge were done for by the flames of 2015.

(The geocache, according to the app, had been placed since the blaze.)

The rock formations that comprise the butte’s high point, although interesting to look at, are lousy with cunning hiding places.

Some of these crevices are the sort that, when you’ve wedged most of your upper body into them, can induce claustrophobia. It’s all too easy to imagine one stone shifting a few inches, leaving you in a painful and precarious position and pondering how easy it might be to amputate your arm with a pocketknife.

All four of us combed the plateau, fanning out from the spot where Lisa’s phone said the cache ought to be.

Max’s disappointment was degrading into despondency. I tried to console him, noting that we had made a thorough search and anyhow maybe somebody stole the cache.

He didn’t seem mollified but he did take the lead on the hike back to the rig, stomping through the woods.

Within a half hour or so Max’s mood had improved — a 9-year-old’s attitude being as unpredictable as the waves in an unsettled sea.

It helped that he had the foresight to step outside the car before twisting the cap on his bottle of Sprite, which, agitated by the decrepit roads, fountained a fan of lemon-lime foam.

His sister, however, uncapped her bottle while we were driving, with predictably sticky results and the sort of gloating opportunity that younger brothers crave.

We had a nice hike out Windy Ridge for a couple miles, reveling in the expansive views of the Burnt River Canyon and exclaiming with delight when Max spotted the distinct and beautiful blossom of the bitterroot.

The next day we drove out to Sumpter Valley and then up into the Elkhorns, our destination the lime quarry along Baboon Creek.

This is a fascinating place to visit even when you’re not looking for a geocache.

The Blue Mountain Lime Company gouged the slopes between 1963 and 1971, according to a report from the Oregon Department of Geology and Mineral Industries on the state’s limestone deposits.

The Baboon Creek quarry was the second the company mined in the Elkhorns. The first site, on Marble Creek on the east side of the raange, opened in 1958.

The rock was processed into industrial lime at a plant about 5 miles north of Baker City, south of Wingville Lane and just west of the railroad tracks. The plant closed more than 40 years ago but snowy-white piles of lime remain — they’re quite distinctive even from the summit of Elkhorn Peak, more than 5,500 feet above.

Although limestone mining ceased long ago, the benefits of Blue Mountain Lime’s operation remain. The company was responsible for building the road that crosses the Elkhorns at Marble Creek Pass, the southern terminus of the Elkhorn Crest National Recreation Trail and one of just two roads — the other being the Elkhorn Drive Scenic Byway — that cross the spine of the range.

The road was a haul route for limestone trucks bringing rock from the Baboon Creek quarry over the Elkhorns and down Marble Creek to the processing plant.

I’m not sure Max cared much about this history.

But he was awfully interested in the geocache that the app told us was located near the top of the quarry.

Lisa and I were leery, fearing a repeat of the previous day’s failure.

We needn’t have worried.

The cache — a plastic container — was conspicuously placed against the base of a fir.

Max dug into the contents, an eclectic mix that included a couple of granola bars, a handwarmer and a candy ring pop that Olivia dearly wanted to take.

We poked around on the wide, flat terraces the miners hacked into the hillside. The quarry, never patented, is public land.

It’s an intriguing part of Baker County’s mining history — in part because it’s comparatively recent. And because the nature of mining limestone is quite different from tunneling into the ground to intercept a vein of gold that might be only a foot wide the quarry, which extends for several hundred vertical feet and even more width, is considerably more prominent than a lode mine, many of which have caved in at the entrance anyway. Mining limestone economically requires both quantity as well as quality.

The Baboon Creek quarry is visible from miles away, a blatant patch among the dark green forests, sometimes gray and sometimes nearly white depending on the perspective and the angle of the sunlight.

We’ll likely be out this weekend, chasing the snow as it recedes up the mountains.

(Although the storm earlier this week at least temporarily reversed that seasonal shift — about a foot of snow fell in parts of the Wallowas and Elkhorns.)

Wherever we go I’m certain of one thing.

Max will make sure the app is up and running, luring us to another green icon on the word of someone we’ve never met and probably never will.