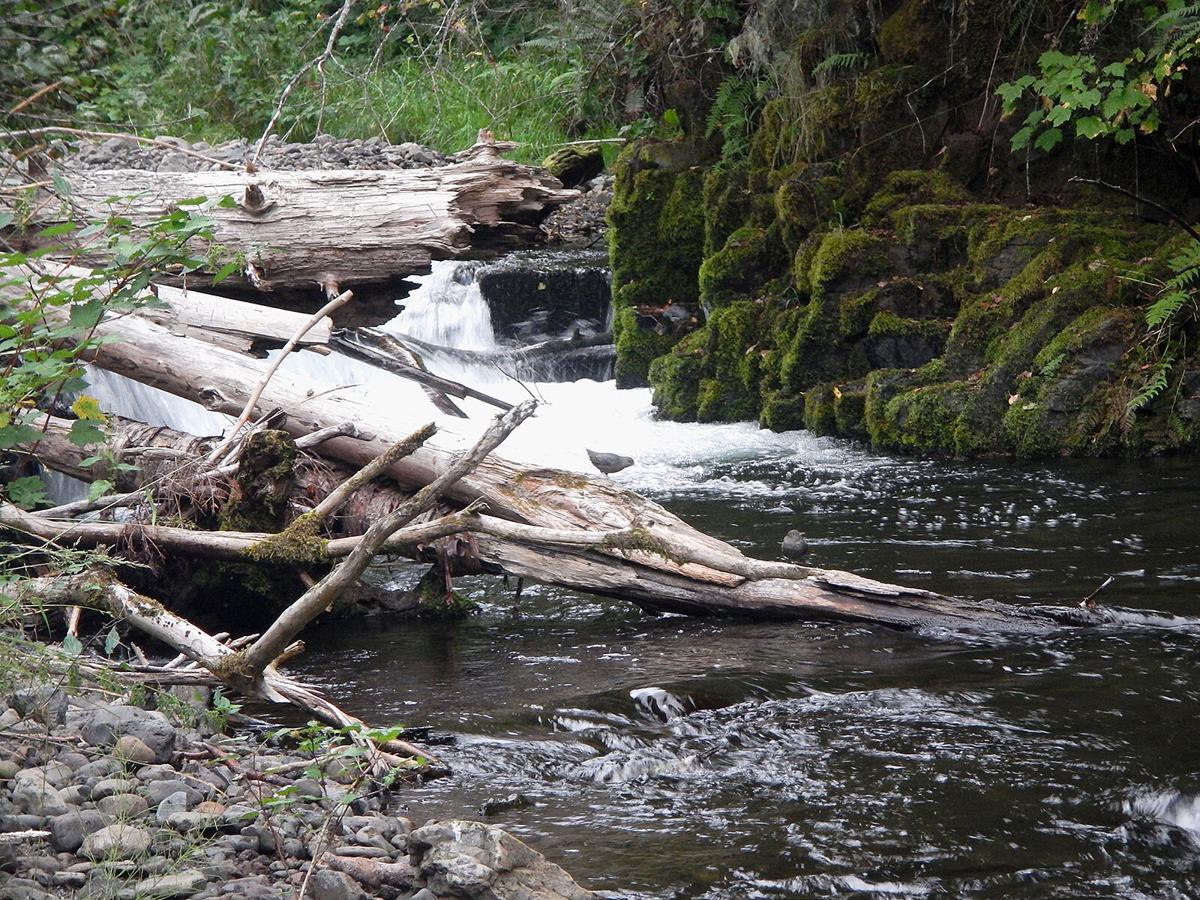 Two American dippers perch on a tangle of logs that adjoin a shaded pool on the north fork of the Umatilla River. 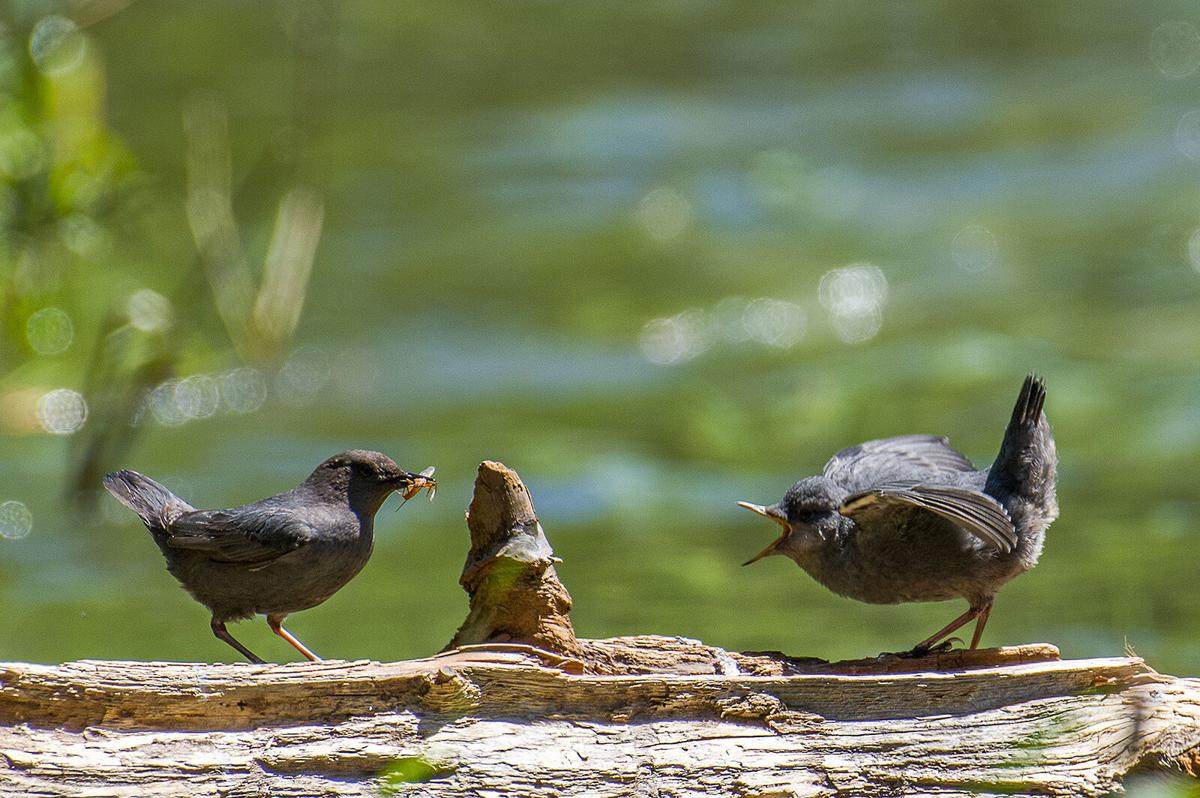 A mama dipper bird prepares to feed her hungry baby.

Two American dippers perch on a tangle of logs that adjoin a shaded pool on the north fork of the Umatilla River.

A mama dipper bird prepares to feed her hungry baby.

“… ouzels seem to show excellent taste in their choice of surroundings.” — Charles Batchelder

Daydreams come easy when I would rather be wading in a cool mountain stream.

Looking out my office window, I let my mind drift back to 1966 and a hot summer day spent fishing with my high school buddy Norm. “There’s a ‘shite’ bird,” Norm shouts, pointing to a small, gray, wren-like bird that bobbed up and down atop a midstream boulder. His scatological reference related to a distinctive whitewash patch the bird left on its favorite perch.

The American dipper or water ouzel, as it is sometimes known, flexed its spindly legs like an old man with weak knees before leaning forward to peck tiny bugs from wet cobble that glistened in bright sunlight. Soon tired of our presence, it sounded a quick “zeet, zeet” and took off in a flurry of wing beats. Flying above swift current that eddied and tumbled over moss-covered rock, it landed at the head of a riffle, paused as if to take a breath, and dove to walk on the bottom of the stream.

The dipper’s plunge is aided by movable flaps over each nostril and enlarged preen glands that supply oil to waterproof its plumage. An insulation layer of down under stiff, outer feathers provides further protection against the elements.

Unfortunately, my brief sojourn into the past is interrupted when a colleague enters my office and peers at me through wide diameter, tinted lenses that shield his light-sensitive eyes. Bill clutches an article from Auk, a scientific journal of ornithological research, titled “Winter Notes from New Mexico.” The noted ornithologist, Charles Batchelder, penned the article in April 1885. “You like dipper birds, don’t you?” Bill asks, with the certainty of a good lawyer who knows the answer in advance.

I scan the article. Ten pages into an account of a frigid December day on the Gallinas River, New Mexico territory, is a description penned in an anthropological style characteristic of many 19th century naturalists: “The Ouzel stood with its legs a little bent, its body being nearly horizontal, facing across the log, and apparently watching the water for anything eatable that might come within reach.” Over the next several pages, Batchelder captures the bird’s mannerisms with enough clarity I can envision it perching on an ice-crusted rock with clear, cold water swirling at its feet.

On a more recent summer afternoon, near our cabin on the Umatilla River, I donned a snorkel and mask to get a feel for the dipper’s underwater world. The orange claw of a crayfish first came into view. In a deep pocket scoured by spring floods huddled a dozen mountain whitefish. Next up were several fingerling rainbow trout followed by a school of speckled dace that appeared chubby and curious. Further downstream, where the pool broadened and current slowed, subyearling Chinook salmon resided. Small salmon are deeper-bodied than trout of the same length and exhibit vivid parr marks.

Two different kinds of caddisfly cases lined the shallows. One version had a pebbly case. The other larval form of this keystone aquatic insect built its protective case of shredded bark — like rough-cut lap siding. I sensed there was more to see, but a person can only hold their breath for so long.

A week elapsed before Bill wandered by my office to discuss the article. “Only a true naturalist would describe the joys of a bird swimming under a skim of ice, then later admit to shooting it for his stuffed animal collection,” I said, before moving to a whiteboard to diagram streams that emerge from the slopes of the Blue Mountains like spokes on a wheel. “There’s the Umatilla, Lookingglass, Wenaha, Tucannon, Touchet, Mill and Walla Walla. Dipper birds frequent them all.”

Bill stood silent while I continued with an account of a nest seen on the North Fork of the Umatilla River. “The nest was globe-shaped, about a foot high and built entirely from moss. I often wonder if the site was attractive because of the sun’s azimuth, proximity to food, or because basalt outcrops provide a stable platform?”

“Or something else you haven’t thought about,” Bill replied, in a cautionary tone that reminded of a priest about to counsel a sinner.

Touche! Once again I am reminded to not draw strong inference from a limited data set. Although I hoped for more discussion about a nest the naturalist John Muir once described as “one of the most extraordinary pieces of bird architecture,” it was not to be.

The topic of dipper birds had pretty much been beaten to death.

Bill went on his way, slipping out the door like a nomadic dipper might ease from sight when it dove at the head of a riffle. I leaned back in my chair and let my mind wander to the wonder of moving water and special places these remarkable birds call home.