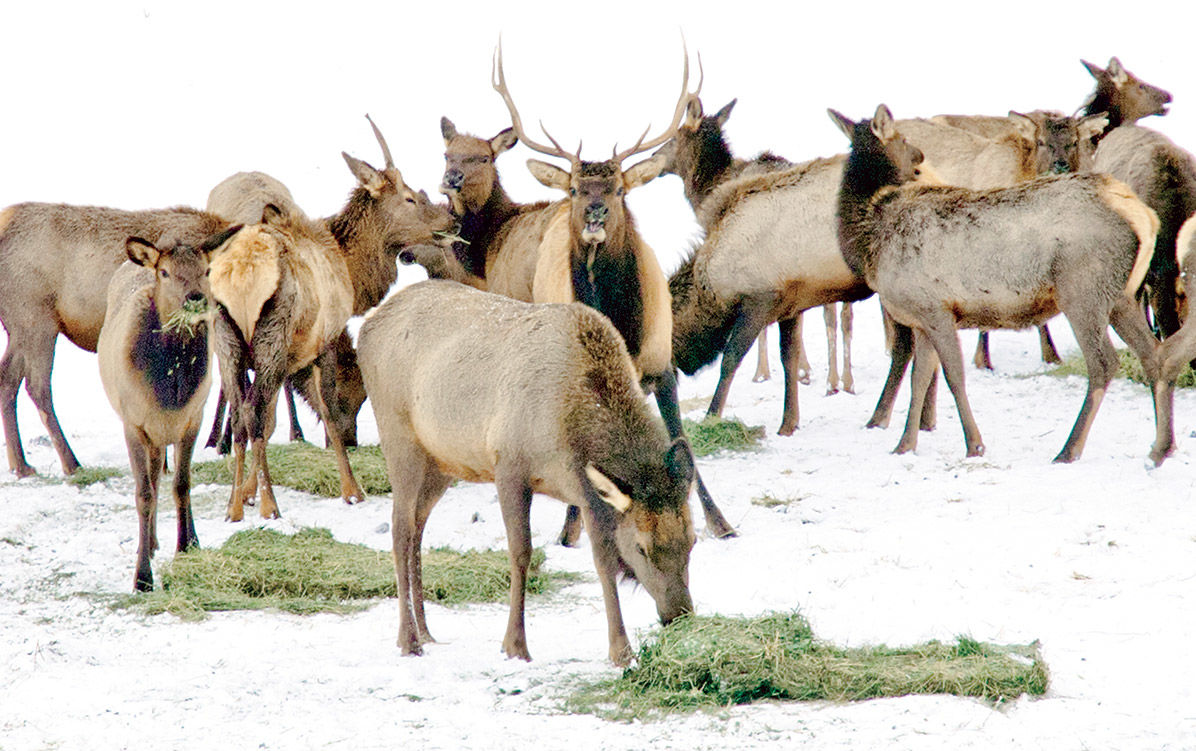 Elk munch on alfalfa hay during a previous winter at the Oregon Department of Fish and Wildlife’s feeding site along Anthony Creek, about 10 miles west of North Powder.

Elk gather during a previous winter at the feeding site near Old Auburn Road, southwest of Baker City.

Elk munch on alfalfa hay during a previous winter at the Oregon Department of Fish and Wildlife’s feeding site along Anthony Creek, about 10 miles west of North Powder.

Elk gather during a previous winter at the feeding site near Old Auburn Road, southwest of Baker City.

Elk, it turns out, are no more able to resist the lure of ice cream than a sugar-craving kid is.

Elk, with their four-chambered stomachs, are better equipped to digest grasses and shrubs than, say, triple-chocolate caramel swirl with fudge chunks.

Or even plain vanilla, come to that.

But Marvin, whose job is to keep hungry elk satiated lest they plunder ranchers’ haystacks in the Baker and North Powder valleys, uses ice cream as the sweet metaphor for the alfalfa hay that he and his crew distribute every day at the Elkhorn Wildlife Area.

Marvin, who is starting his second winter as the Wildlife Area’s manager, said the scanty snowpack means elk can easily find food on their own.

But the desiccated winter grass they can scrounge is pretty skimpy fare compared with the fresh green alfalfa the Oregon Department of Fish and Wildlife (ODFW) sets out.

Which is why Marvin equates the alfalfa to a scrumptious frozen dessert.

“Why settle for dry grass when you can come in and eat ice cream?” he said.

The elk that return yearly to the 10 sites along the eastern base of the Elkhorns that comprise the Wildlife Area clearly prefer the latter option.

The animals’ seasonal migration to the feeding sites, which range from the south end of the Elkhorns along Old Auburn Road about 10 miles southwest of Baker City, to Shaw Mountain northwest of North Powder, is determined by time rather than by weather, Marvin said.

“It’s amazing how they can time that,” Marvin said.

Whether the temperature is balmy or arctic, and whether snow is drifted deep or, as is the case this year, scarce, the elk begin to “trickle in,” as Marvin puts it, within a few days after Dec. 1, when ODFW closes the Wildlife Area to public entry.

(Most of the feeding sites are publicly owned.)

“Our elk are pretty accustomed to getting fed,” Marvin said. “They show up regardless of the weather most years.”

The Dec. 1 closure date generally coincides with the end of elk-hunting season — for obvious reasons ODFW doesn’t want to entice hundreds of elk into a concentrated area that’s also open to hunting.

Once the feeding sites are closed to the public, Marvin and his crew, which includes two full-time and two seasonal employees, distribute alfalfa to the feed sites.

Making sure the places are stocked immediately is crucial, he said.

ODFW created the Elkhorn Wildlife Area in 1971, but its purpose is not to keep elk from starving — the hardy animals are capable of looking after themselves even during persistently polar winters, the agency’s wildlife biologists say.

The problem is that the easiest meal, often as not, came from hay that ranchers put up to feed their cattle during winter.

This was a challenge before ODFW established the Wildlife Area mainly because the Elkhorns lack a range of foothills that could serve as winter range for elk and deer.

Once snow drove animals out of the mountains, they often headed directly for ranches.

ODFW’s idea was to find places where the agency’s workers could, in effect, intercept elk by enticing them with alfalfa, and convincing them to stay there and eat the state-provided handouts.

The strategy has proved to be largely effective — so long as it’s also consistently applied, Marvin said.

“This is a seven-days-a-week job,” he said soon after taking the manager’s job in 2018. “The elk will eat one way or another. If we’re not out there to feed them they’d be down in the neighbors’ haystacks, and that’s what we’re here to prevent.”

Covering all 10 feeding sites involves a 150-mile round-trip drive from the Wildlife Area headquarters near Anthony Creek, about 10 miles west of North Powder.

Elk, generally numbering more than 1,000 head, are the main customers, but the Elkhorn crew also feeds deer at one site on Antelope Peak, several miles south of the headquarters, and deer also show up at the Muddy Creek, Hunt Mountain, Auburn and Elk Creek sites.

Marvin said the arrival of elk this year has been typical, despite the relatively shallow snow — about 4 inches at both the Auburn and Anthony Creek sites.

Workers counted about 600 elk at Auburn last week, and around 200 at Anthony Creek.

The tally includes a handful of mature branch-antlered bulls, which usually are the last to arrive. Bigger bulls generally don’t mingle with the cows, calves and young bulls that comprise the bulk of the herds at the feeding sites, Marvin said.

The Anthony Creek site, on River Lane, and the Old Auburn Road sites are the two where visitors have a good chance of seeing elk. There is parking space along both roads.

Marvin is just the third full-time resident manager for the Wildlife Area since ODFW added that position in 1981.

He replaced Eddie Miguez, who retired in 2018 after 20 years. The first resident manager was Ken Emerson, who had the job for 18 years.