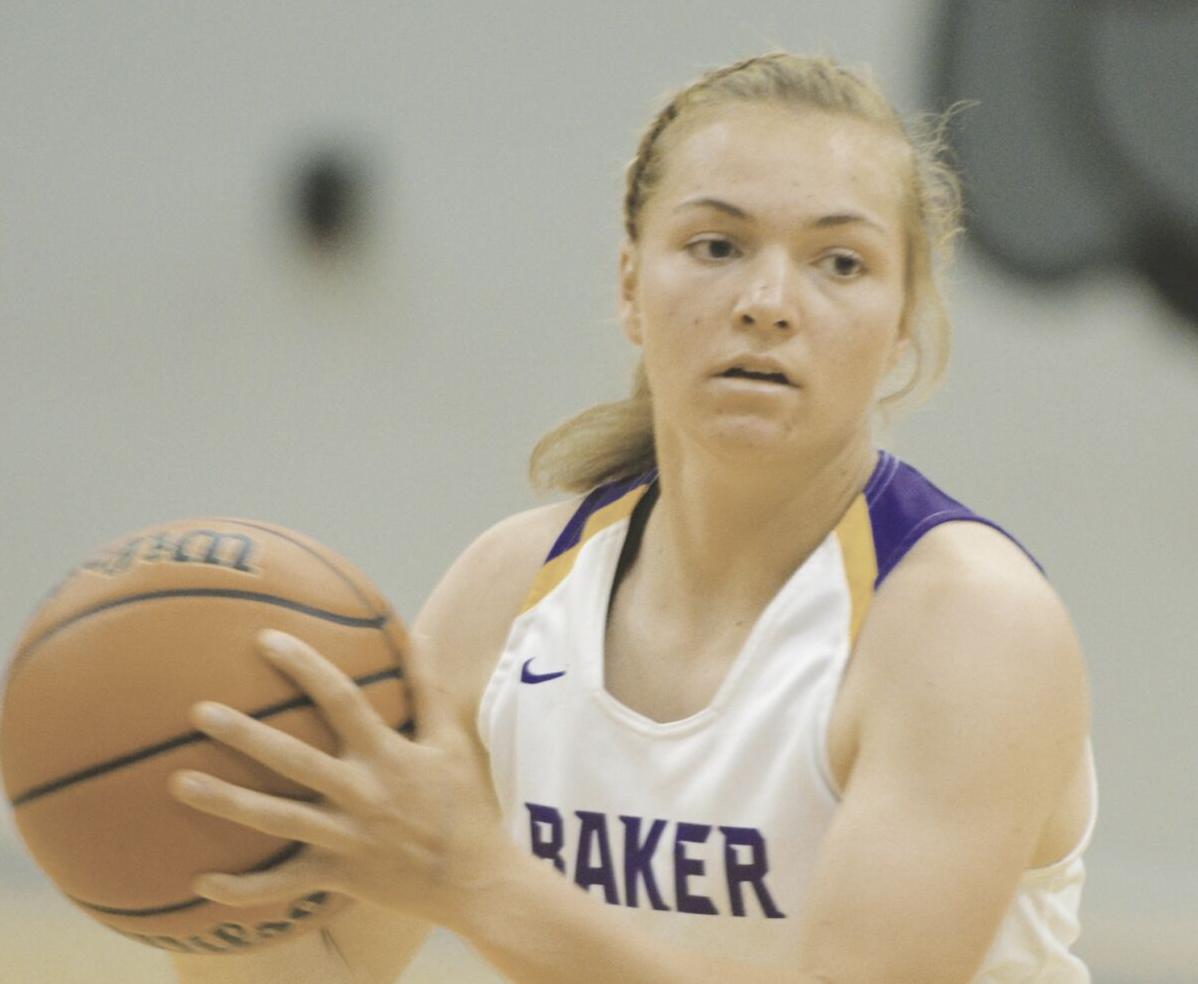 Baker’s lone senior, Sydney Keller, had eight points in her final game in the BHS gym on Tuesday, June 15. 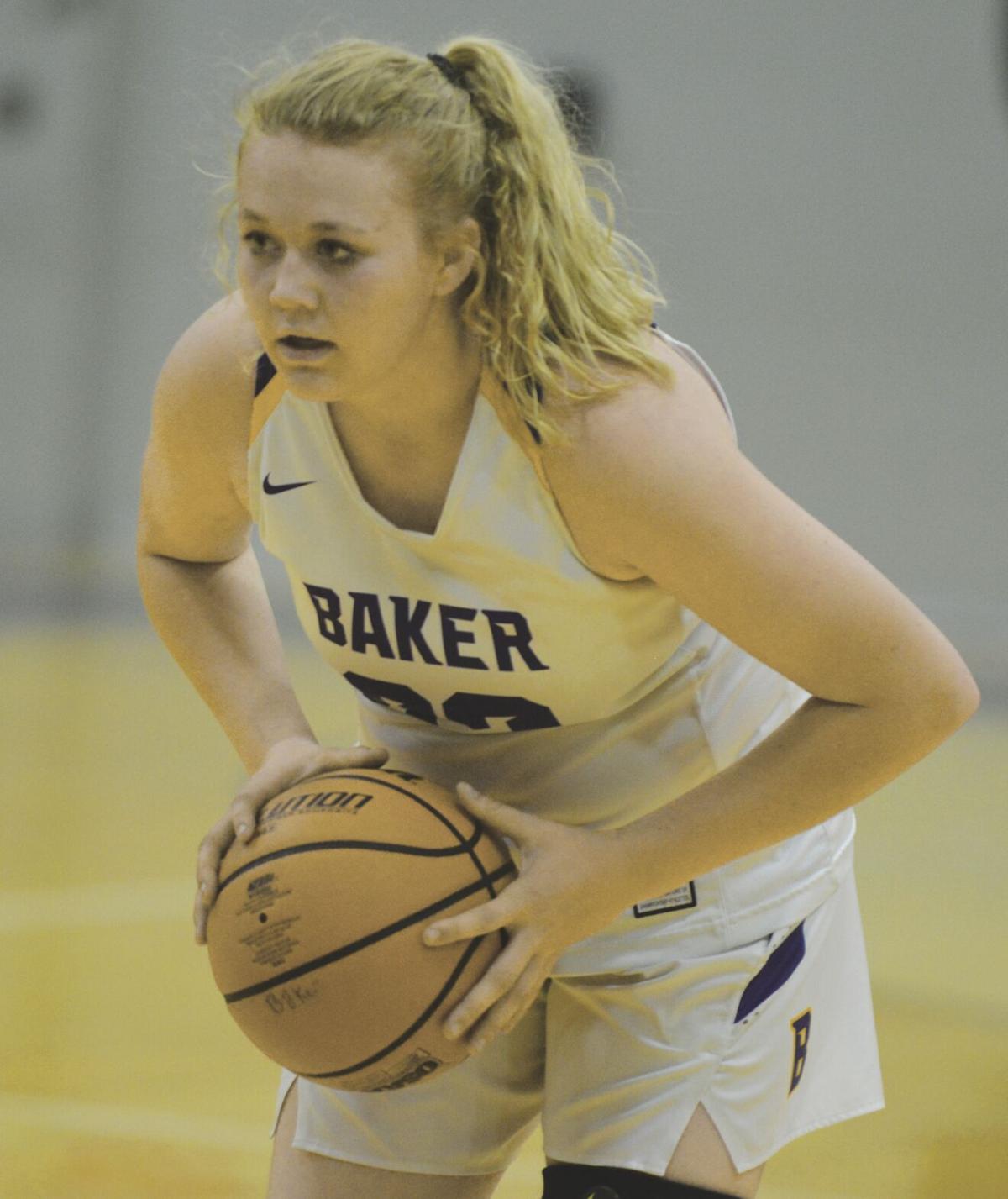 Sophomore Macey Moore had 10 points in Baker's 54-15 win over Ontario on June 15 in the Baker gym.

Baker’s lone senior, Sydney Keller, had eight points in her final game in the BHS gym on Tuesday, June 15.

Sophomore Macey Moore had 10 points in Baker's 54-15 win over Ontario on June 15 in the Baker gym.

Fresh from two days of rest after a hectic week, the Baker girls basketball team overwhelmed Ontario 54-15 on Tuesday, June 15 in the Baker gym.

The Bulldogs had played five games in six days from June 7-12, going 3-2 in that span.

Baker coach Mat Sand was excited to see his team return with a lot of energy after losing 39-30 to Burns on June 12.

“We came out with some rest (and) the girls are really starting to understand that their energy is what makes this game fun to watch,” Sand said.

The Bulldogs (7-3) controlled the tempo from the opening jump ball. Baker was dominant on both sides of the court in the first quarter, racing to a 21-2 lead as sophomore Macey Moore had six of her eight points.

“We need to play at our level of game,” said Keller, who had eight points. “When you play a team, regardless of how good or bad they are, you want to stay at your level, and play your game.”

Ontario (0-11 on the season) found a bit of offensive rhythm in the second quarter, with nine points, but Baker still extended its lead, to 31-11 at halftime.

Keller said Sand exhorted the Bulldogs to continue their inspired play in the second half despite the big lead.

Baker responded, outscoring Ontario 20-2 in the third quarter, a near repeat of the first quarter.

“Everyone needs to be aware and have the energy to be on the floor, because the little mistakes can cost,” Keller said.

“It’s super exciting, it’s kind of why I stuck around to help them out,” Keller said. “Being such a young team there was no one really to lead them, and help Mat teach them what they should be doing, to give back to the program and help them grow.”

Sand said Baker’s defensive dominance is a sign that his young team — the roster includes 10 sophomores and two freshmen — is beginning to blossom.

“I’m the type of coach that everything starts with defense, if your offense is struggling, you can make it up on the defensive side of the ball,” Sand said. “I just loved how we played defense up front.”

As has been the case during this condensed season — 12 games in three weeks — Baker has little time to revel in its latest win.

Baker travels to Vale today and then to La Grande on Friday, June 18, with a chance to avenge a 51-32 loss to the rival Tigers on June 8.

“I think we can compete against La Grande but we got to play a mistake-free game,” Sand said.

Keller, who played her final game in the BHS gym Tuesday, is also excited about one last chance to beat La Grande, which is 9-0 this season.

Prior to the June 8 loss, Baker had beaten La Grande 13 straight times, and Keller was a part of more than half of those wins.

“I’m super psyched, I have been really looking forward to it ever since they were here in our house,” Keller said.

Sand said Tuesday’s win over Ontario was bittersweet, as he watched Keller, a three-year starter, in her final game before a home crowd.

Keller said she’s grateful to the Baker community for its support, and for the memories she has made on the hardwood.

“Just to leave it all out here and wear my last white jersey as a Bulldog, now we will see where it goes, and come at Vale, come at La Grande. I am just super grateful for everyone at Baker and all the support,” Keller said.