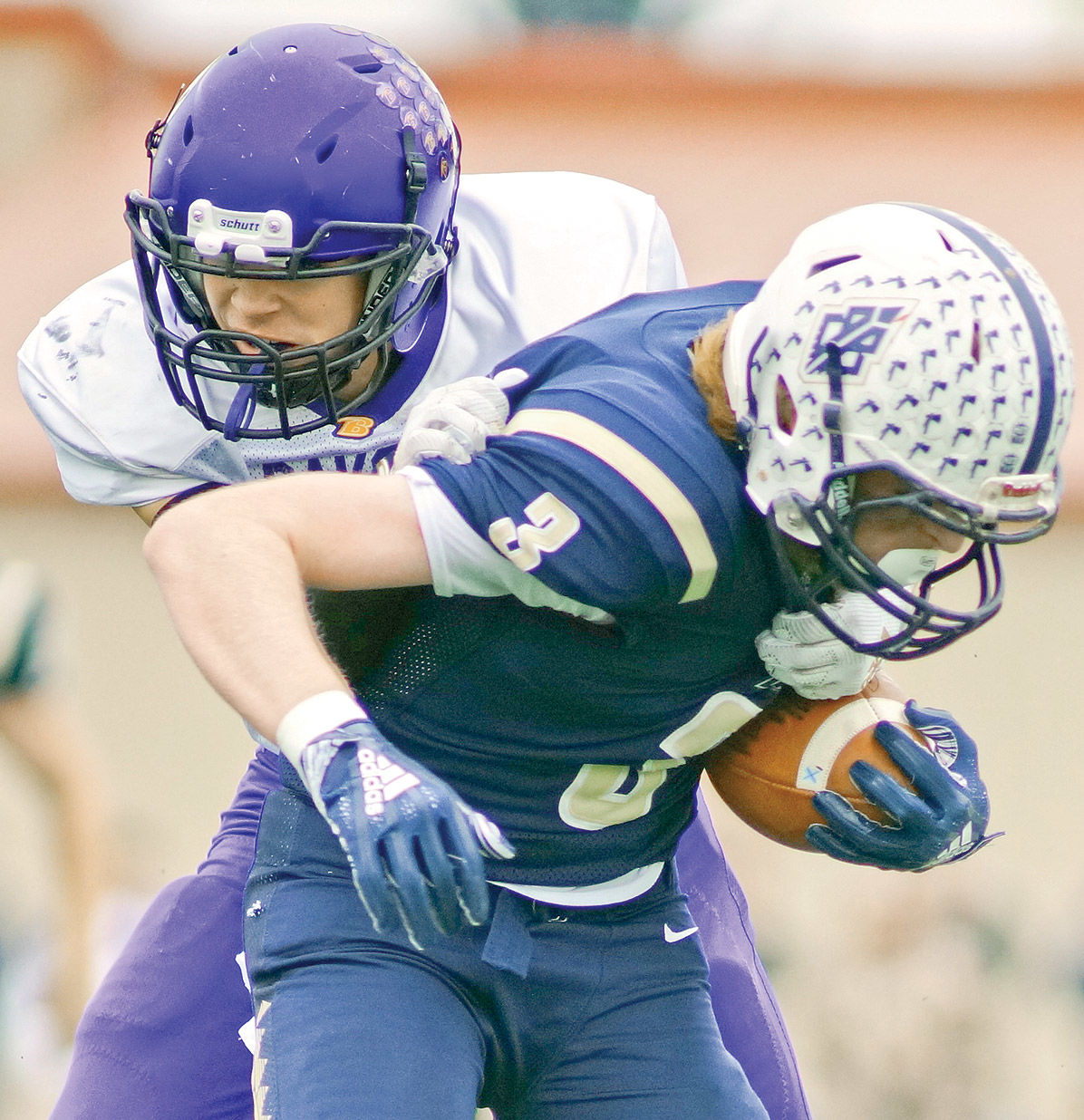 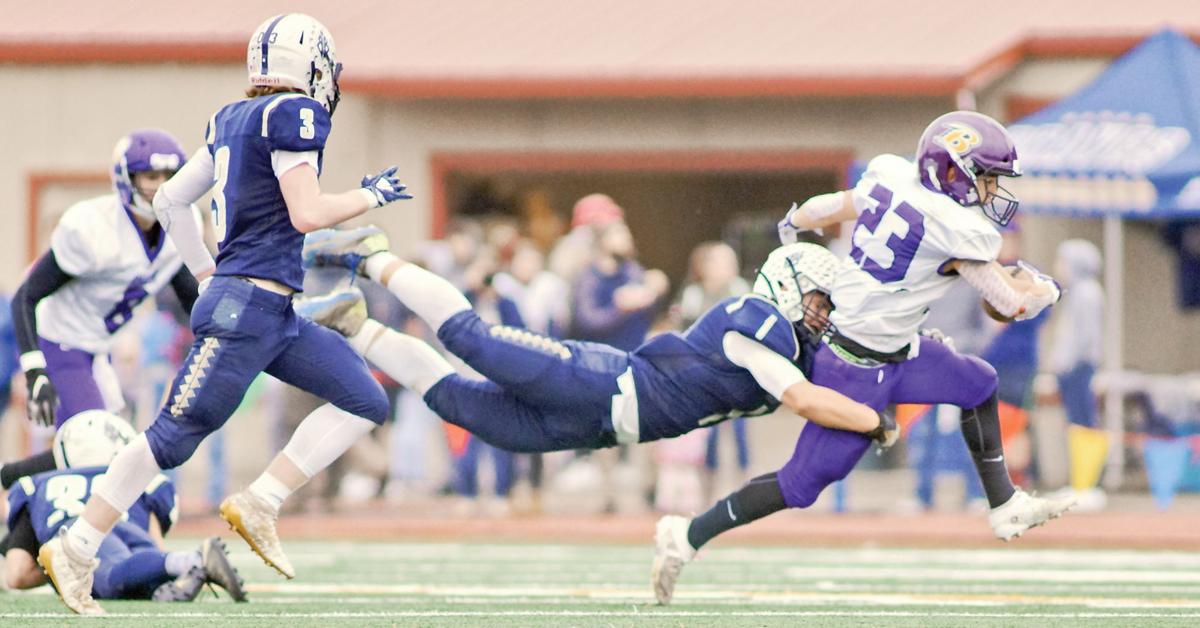 Baker running back Alex Hammans tries to run out of the grasp of Banks linebacker Bryson Cook, the defensive player of the year in the Cowapa League. 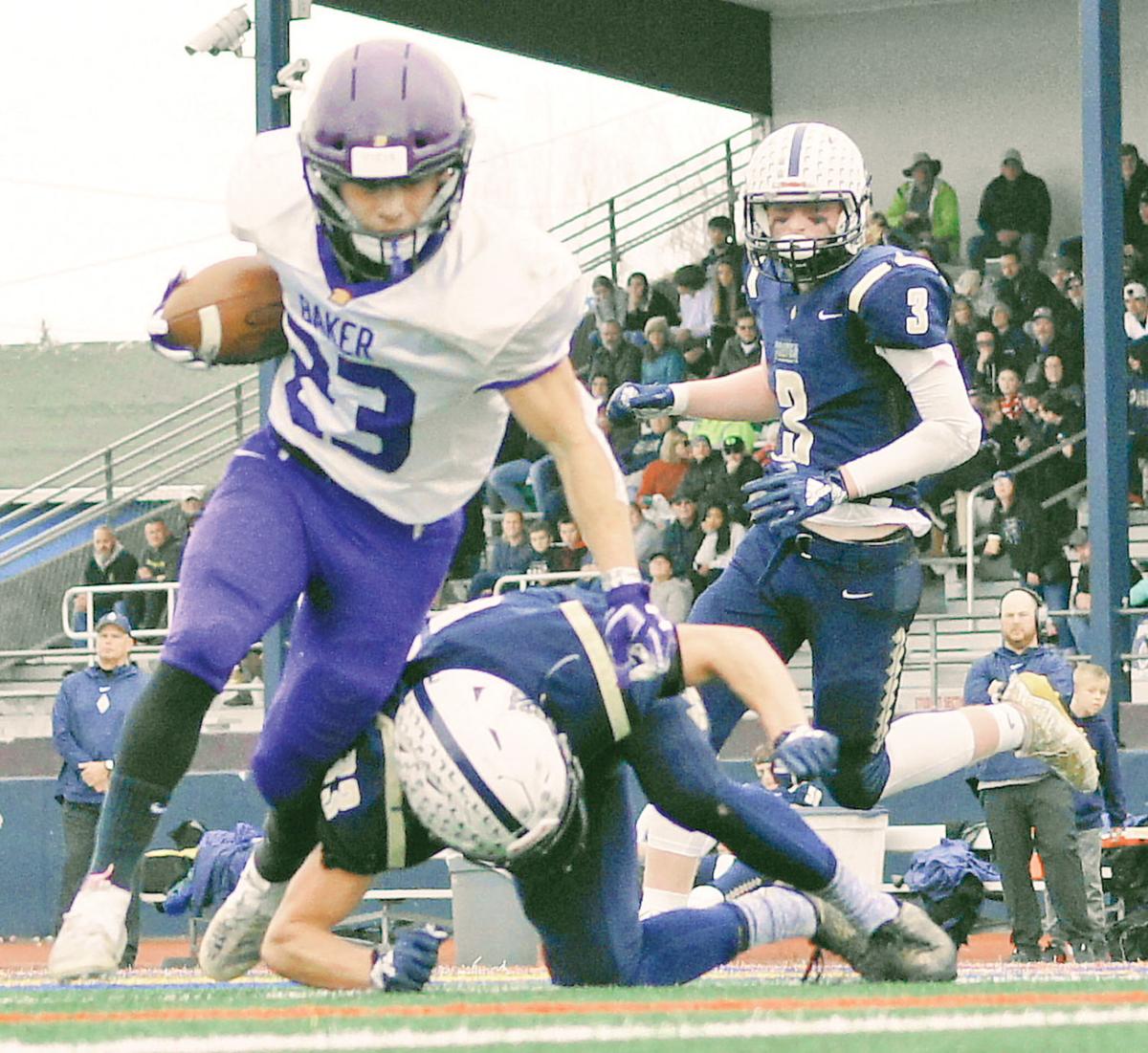 Baker’s Alex Hammans gets past a Banks defender Saturday. 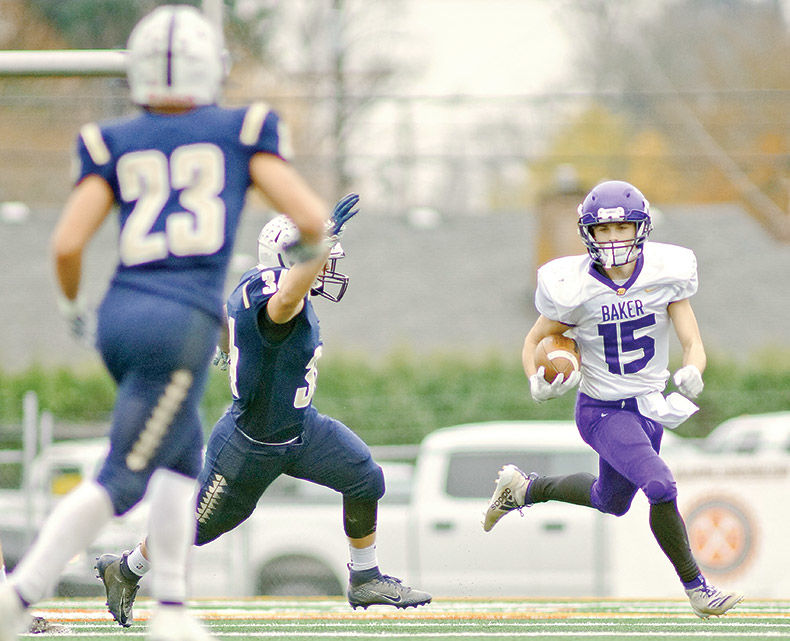 Baker’s Kaden Myer gets upfield on a kickoff return during Baker’s 34-14 loss to Banks on Saturday.

Baker running back Alex Hammans tries to run out of the grasp of Banks linebacker Bryson Cook, the defensive player of the year in the Cowapa League.

Baker’s Alex Hammans gets past a Banks defender Saturday.

Baker’s Kaden Myer gets upfield on a kickoff return during Baker’s 34-14 loss to Banks on Saturday.

The game was half over and Baker was behind, but coach Jason Ramos told the Bulldogs in the locker room that they were right where they needed to be.

“We were feeling good,” is how Ramos described Baker trailing top-ranked and unbeaten Banks 12-7 at halftime of a Class 4A quarterfinal game Saturday at Hillsboro High School.

The Bulldogs, after falling behind 12-0, had put together their best offensive drive, capped by Alex Hammans’ 3-yard touchdown run late in the second quarter.

They followed by forcing a Banks punt just before halftime.

And with Baker set to receive the second half kickoff, Ramos figured another solid drive could put Baker in the lead and, perhaps as important, put pressure on Banks, which was seeking its 21st straight win.

“We wanted to come out and put a drive together,” Ramos said.

Baker went 3 and out.

The Bulldogs also forced a punt on Banks’ first possession, but when Baker was called for a block in the back on the ensuing punt return the Bulldogs were pinned at their own 5.

The Braves forced a punt and started their next drive at the Baker 35. Two plays later Jacob Slifka caught his second touchdown pass, 24 yards from Tanner Shook, and Banks led 18-7, with 4:27 left in the third quarter, after the two-point conversion try failed.

But Ramos said he was still confident.

But Baker’s offense floundered again and the Bulldogs had to punt.

And Banks — specifically that combination of Shook passing to Slifka — punished the Bulldogs again.

Slifka’s third touchdown catch, followed by his extra point, boosted the Braves’ lead to 25-7 with just under 2 minutes left in the third quarter.

At that point Slifka, a 6-foot-5 senior who was a first-team receiver in the Cowapa League, had accounted for all of Banks’ points — three touchdown catches, two field goals and an extra point.

Ramos said Baker’s failure to capitalize on Gambleton’s long return was a theme.

Kaden Myer had two returns to near midfield in the first half, and Baker failed to muster a first down after the first of those returns.

“We had great returns, we just struggled to do anything with it,” Ramos said.

After another Baker punt early in the fourth quarter, Banks put the game out of reach when Shook tossed his fourth touchdown pass — this one from 9 yards to Jackson Walker.

Baker blocked Slifka’s extra point try but the Braves’ lead was up to 31-7 with less than 9 minutes left.

Banks recovered at the Baker 3 but the Bulldog defense kept the Braves out of the end zone. Banks settled for Slifka’s third field goal, a 22-yard boot that gave the Braves a 34-7 lead.

“Things kind of got away from us there at the end,” Ramos said.

But Baker didn’t give up.

The Bulldogs responded with their best offensive possession of the second half. Gambleton caught a 20-yard pass from Spencer Shirtcliff to the Banks 30, and Shirtcliff scrambled for 10 yards to the Banks 20.

After another first down Shirtcliff hooked up with Riley Flanagan for an 8-yard score. Rushton’s extra point cut the lead to 34-14.

Baker failed to convert an onside kick but the Bulldogs did force another Banks punt with 2:09 left.

Flanagan, Caden Long and Spencer Smith each had a reception to move the ball to the Banks 48, but the Bulldogs could get no further before the final buzzer.

Banks, which also ended Baker’s 2018 season with a 49-13 first-round win, advances to play Marist Catholic of Eugene on Saturday. The other Class 4A semifinal features La Grande, which beat Baker twice during the regular season, against The Dalles.

Ramos, who guided the Bulldogs to a 6-4 record in his first year as head coach, said it was a “successful season.”

“The kids bought in and did what they were asked to do,” he said. “I felt really good about getting back to the quarterfinals and having a chance to get into the final four. We want to be playing in mid to late November every year. That’s an expectation we want to have for our program.”

Ramos pointed out that Baker’s four losses were all to teams that are still undefeated.

Banks, which fell behind 9-0 in its 28-22 first-round playoff win over Marshfield on Nov. 8, seemed to have learned from its slow start.

The Braves dominated the first quarter against Baker Saturday.

On 3rd and 2 from the Baker 41 with 9:08 left in the quarter, Slifka caught a pass from Shook and ran it in for the first score of the game.

Myer returned the ensuing kickoff to the Baker 45 but the Bulldogs couldn’t take advantage of the field position, going 3 and out.

A strong punt by Long pushed Banks to its own 30, but the Braves quickly moved down the field.

Martial Stegemeier ran for 34 yards to the Baker 14, but there the Bulldog defense, a strength throughout the season, bowed their backs.

2020 Bears vision: Need is dire to get far greater contributions from TE corps

Hub Arkush: Are Bears coaching changes for better or worse?

Tom Oates: Packers need to get physical in rematch with 49ers

Banks lost a yard on its next three plays, but Slifka, the Braves’ do-everything player, booted a 34-yard field goal to give Banks a 9-0 lead with 4:47 left in the first quarter.

On Baker’s ensuing possession Gauge Bloomer ran twice for 12 yards to give the Bulldogs their first first down. But an interception by Jarred Evans ended the scoring threat.

Banks again moved into the red zone, thanks in part to a 20-yard run by Stegemeier. But Baker’s defense tightened again and on the first play of the second quarter Slifka kicked a 33-yard field goal to increase the Braves’ lead to 12-0.

“Defensively we played well enough most of the game,” Ramos said. “We gave up a few big plays but when they got down there we kind of stiffened up and made some plays.”

Baker started its next possession on its own 46 thanks to another long return by Myer, and this time the Bulldogs made use of the short field.

Hammans ran for 13 yards, and Myer caught a first down pass from Shirtcliff to the Banks 20. On 3rd and 3 from the Banks 13 Hammans ran eight yards to set up first and goal.

On 3rd and goal from the 3, Hammans broke an ankle tackle and strode into the end zone. Mahonri Rushton’s extra point cut Banks’ lead to 12-7 with 5:13 left in the first half.

There the score remained, although it was a near thing.

Banks appeared to score a touchdown with less than 2 minutes left in the half, but an offensive pass interference penalty nullified the touchdown catch, and Baker sacked Shook on a 4th and 7 play in the final minute.

“We didn’t convert on a couple of short throws we needed to have, and we had some critical penalties,” Ramos said. “We made too many mistakes, and you can’t do that against a good team.”

“The kids bought in and did what they were asked to do. I felt really good about getting back to the quarterfinals and having a chance to get into the final four.”