Baker’s Cody Skidgel makes contact. Skidgel had four hits, including a pair of doubles, during the Brewers’ four games in two days. 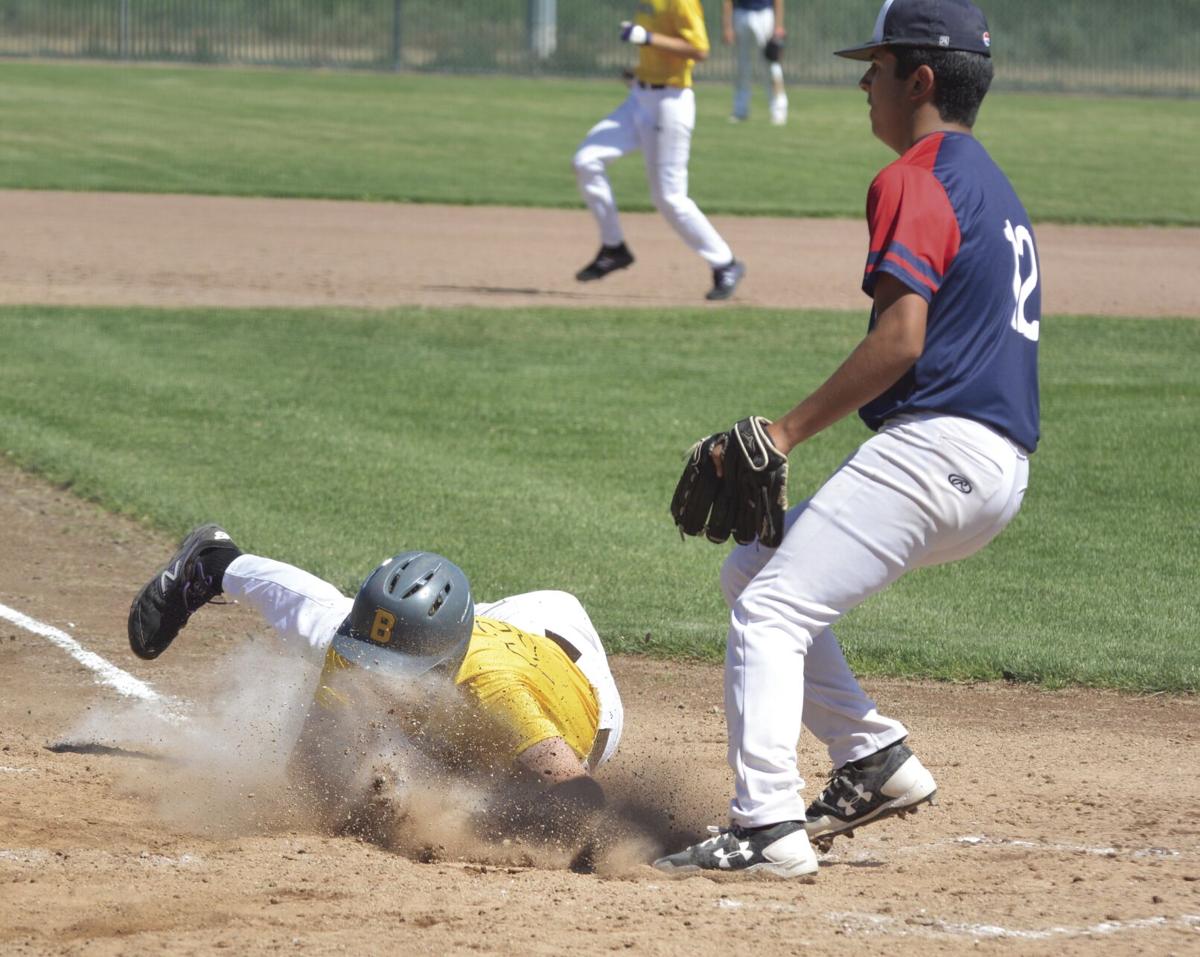 Baker’s Connor Chastain raises a cloud of dust as he slides safely into home Tuesday at the Sports Complex. 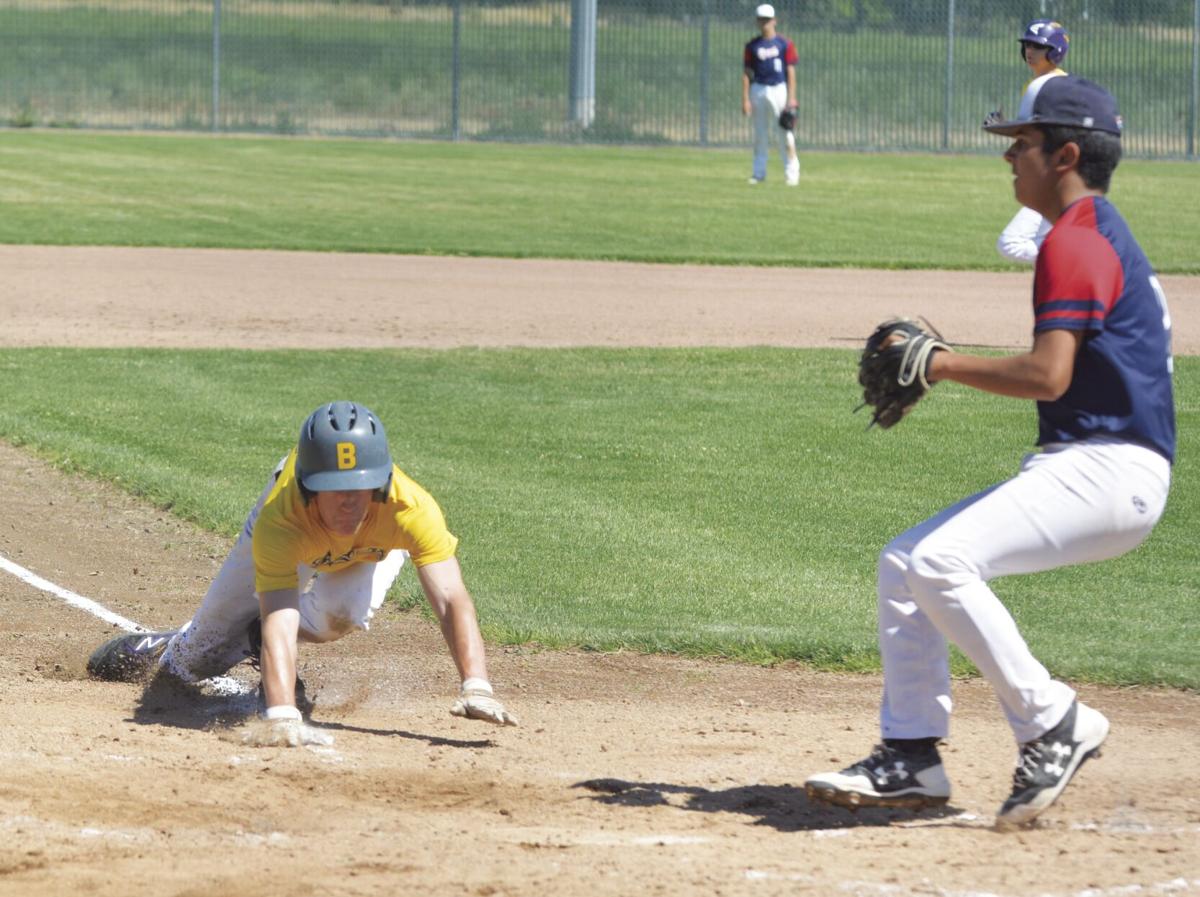 Baker’s Cody Skidgel makes contact. Skidgel had four hits, including a pair of doubles, during the Brewers’ four games in two days.

Baker’s Connor Chastain raises a cloud of dust as he slides safely into home Tuesday at the Sports Complex.

Five weeks ago, a group of Baker City boys gathered on the baseball diamond for the first time in months.

Along with new coach Jared Rodgers, this team comprised a couple of juniors, a large number of underclassmen, and even some middle schoolers.

“A lot of the younger kids haven’t been on the bigger field for very long,” Rodgers said. “A lot of little things had to be worked on in the beginning.”

This 16 and under team has grown a lot since an abbreviated summer schedule started. On Monday and Tuesday the team hosted a round-robin tournament to end the season at the Baker Sports Complex.

“We definitely learned our strengths and weaknesses as a team,” incoming junior Silas Carter said. “It was a very young team.”

The Tigers took an early 5-0 lead after 2 innings and Baker wasn’t able to rally.

Thomas Smithson had a double for Baker’s only extra-base hit and scored the Brewers’ lone run.

Rodgers said the Brewers weren’t patient enough at the plate.

“The stats showed a lack of discipline but the importance of it was to recognize the pitch that was coming and reading it out of the hand,” he said. “To read it out of the hand is important for them to not swing at the curveballs in the dirt.”

“We can only control what we can control, effort and attitude,” Rodgers said. “Just giving those subtle reminders because sometimes it is tough to look at the scoreboard sometimes, but in baseball you should just be worried about the next pitch.”

Later on Monday Baker returned to the field to take on the Pendleton Buckaroos.

The Brewers scored six runs in the fifth inning to cut Pendleton’s lead to 15-8, but the Buckaroos went on to win, 17-10.

“The thing with this team is they all know what they are capable of, we’ve had outings where you are seeing the ball really well,” Rodgers said. “We were finally coming around as a team.”

On Tuesday the Brewers ended up facing the Buckaroos for the second game in a row. For the first three innings, the Brewers made it a ball game, trailing 1-0 after allowing a run in the first inning. Baker wasn’t able to get anything going offensively, though.

Junior Cody Skidgel had a strong outing at the plate, reaching base multiple times. For the tournament he had four hits.

“In the last couple of weeks he was having better success at the plate, he was hitting the ball hard,” Rodgers said of Skidgel.

Rodgers saw a lot of promise from the young hurler, despite Baker falling behind 6-0 early.

“What he realized he needed to work on was changing his timing when he was going out of the stretch with guys on base,” Rodgers said of Conklin. “When I brought that to his attention he started working in a bit of a slide step and I don’t think anyone else stole off of him.”

The Brewers were working to get on base through situational hitting and taking advantage of walks. Sophomore Kai Ogan started off the inning with a single, stole two bases and eventually scored.

But the Tigers took control with a six-run fourth inning.

Though the numbers on the scoreboard weren’t the prettiest, Rodgers was happy to see how much the team had grown in such a short period of time.

“One of our biggest growths was team cohesion, and being a team and not having guys trying to be stand outs,” Rodgers said.

Rodgers hopes that this past five weeks has given his players a new found excitement for the sport, and hopefully they could be back on the field, ready to work if the regular season comes around in 2021 depending on COVID-19.

“I hope they have a bit of a bug for baseball, and they are more motivated and eager get back it next Spring and just having an appreciation for the game,”

Carter, one of the older players, was also excited to see younger teammates, including incoming eighth-grader Jaxon Logsdon, who caught several games this summer, develop.

“He was great behind the plate even though his legs were killing him,” Carter said. “He put on his gear and got back there; threw a lot of people out at second, threw people out at third.”

Being one of the oldest members of the 16U team, Carter is excited to see all of the younger players continue to grow. The one teammate he was really impressed with was 8th grader Jaxon Logson, who caught a lot of the games during the past five weeks.

23 games later, the Baker Brewers sixteen and under team will be able to reflect back on summer baseball with gratitude. After months away from the sport, and a future of sports uncertain amidst the pandemic, they were happy to be back on the diamond, even if it was for a short while.

“I remember at the beginning of the season I told my mom I was happy if I got one game in this year,” Carter said, “Since we got all of them in it was very fun and I could tell our entire team kind of matured.”

“I remember at the beginning of the season I told my mom I was happy if I got one game in this year. Since we got all of them in it was very fun and I could tell our entire team kind of matured.”

Missouri baseball running out of hope