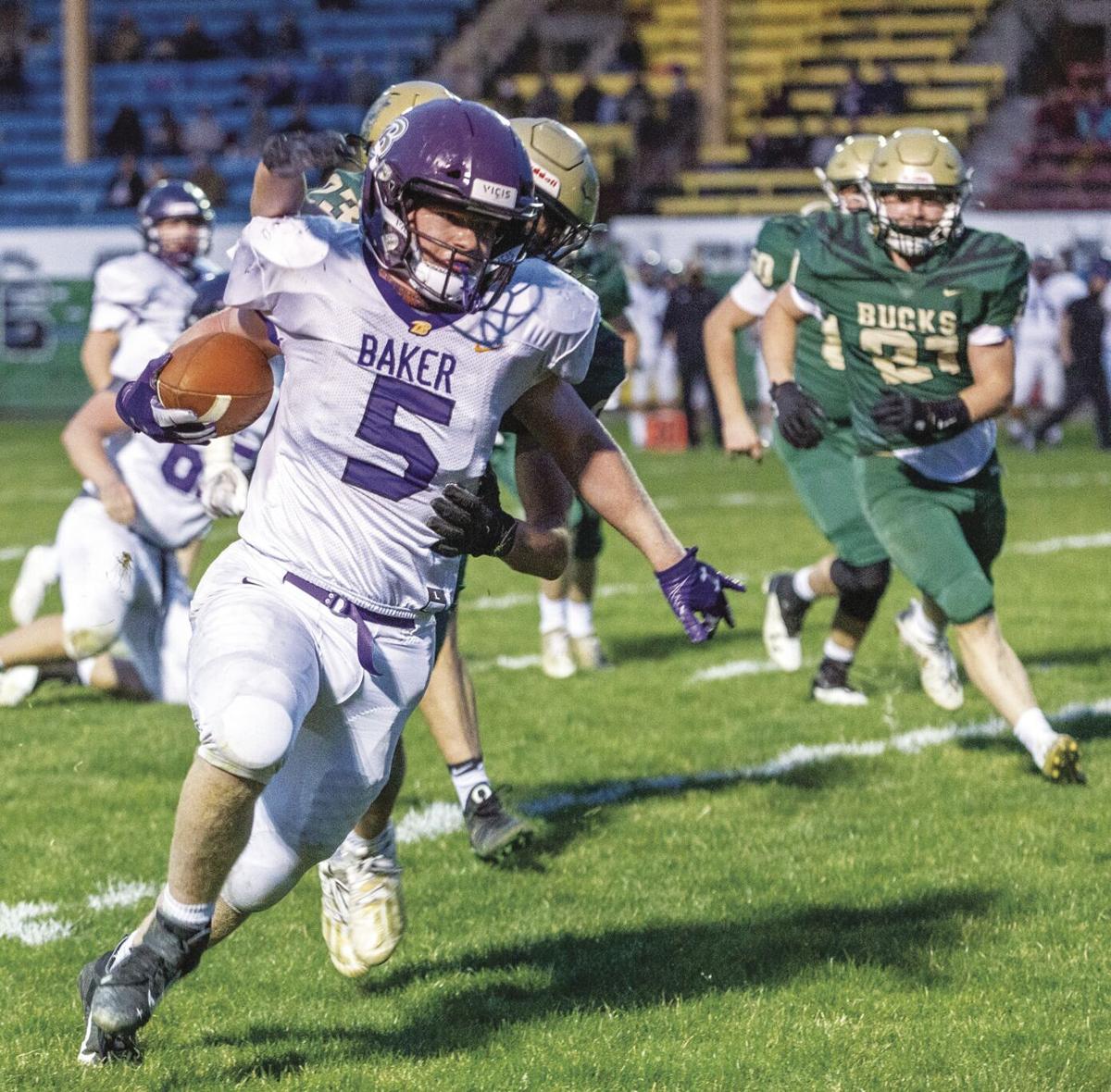 Baker’s Gauge Bloomer (5) gains some of his 173 rushing yards on Friday, April 2 against Pendleton at Round-Up Stadium. 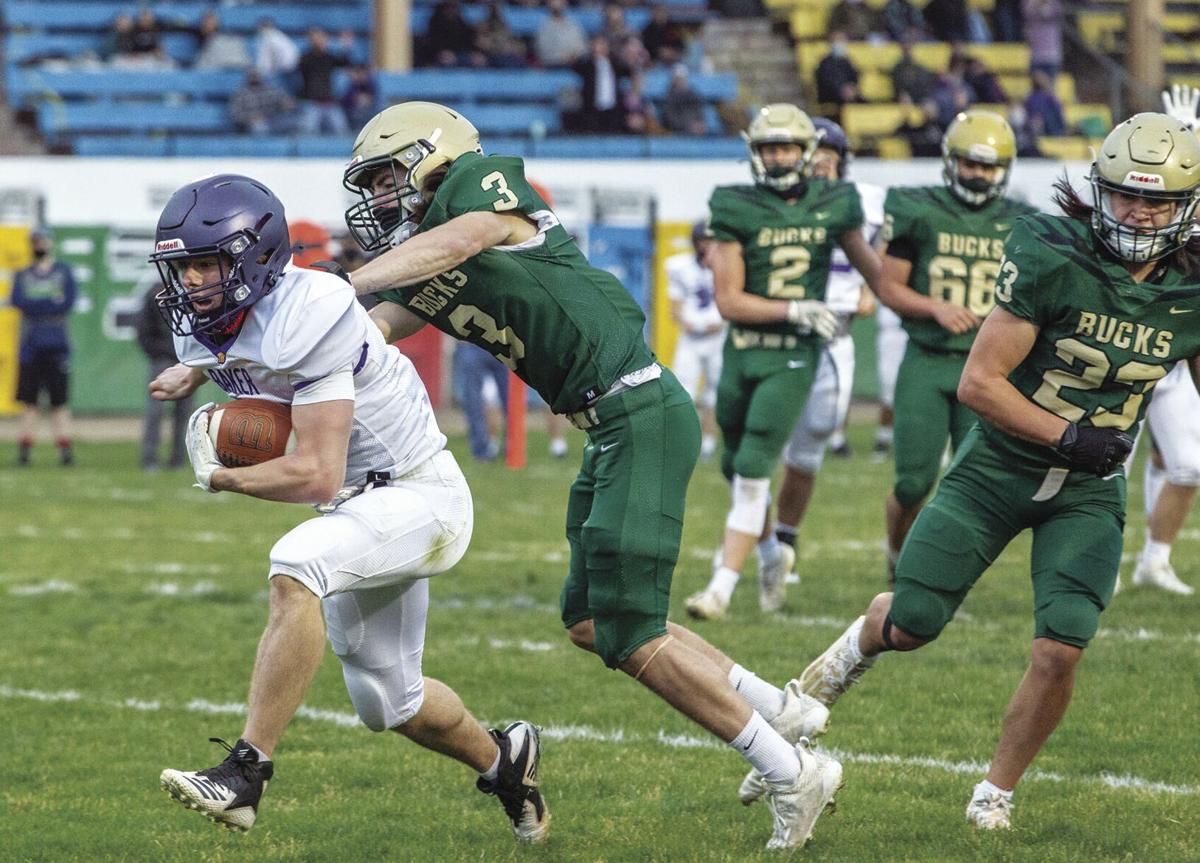 Baker’s Gauge Bloomer (5) gains some of his 173 rushing yards on Friday, April 2 against Pendleton at Round-Up Stadium.

Baker came away with good experience, but also a loss, after traveling to Pendleton on Friday, April 2 to take on the Buckaroos at Round-Up Stadium.

It wasn’t clear until earlier in the week who the Bulldogs would play in their penultimate game of this pandemic-shortened season, or even if they would play at all after a contest with Milwaukie was canceled.

But the match up with Class 5A Pendleton came together quickly.

“We were just happy to have a game,” Baker coach Jason Ramos said. “It worked out well that we were able to play. It was a good challenge, they were the best team we’ve seen all year.”

The feeling was mutual, as Pendleton coach Erik Davis told the East Oregonian.

“There was zero hesitation to play us and I appreciate that,” Davis said of Baker. “They have some good football players. They had a good tailback and a couple of linemen who were tough to block. They are a good 4A program.”

Preparing for Pendleton was a tough task, Ramos said, as multiple players missed practice due to illness.

The Bulldogs stayed with the Buckaroos early on.

After Pendleton took a 7-0 lead in the first quarter, Baker senior quarterback Gabe Gambleton ran in from seven yards to cut the lead to 7-6.

After another Buckaroo touchdown, Baker senior running back Gauge Bloomer, who led all rushers with 173 yards on 25 carries, scored from three yards out, and Baker trailed just 14-12.

“We were very effectively running the ball for most of the game,” Ramos said. “It was nice to have (Bloomer) back full strength, he ran the ball hard and the guys up front did a nice job blocking. Gauge did some good work on the ground.”

Led by Bloomer, Baker outgained Pendleton on the ground, 186 yards to 151.

Pendleton dominated much of the rest of the way, scoring twice more in the second quarter to lead 28-12 at halftime, then tacking on two more scores in the third quarter to push the lead to 42-14.

Baker senior Kaden Myer caught a pair of touchdown passes from Gambleton in the fourth quarter, from 11 and 29 yards, to narrow the final margin.

Ramos said that despite Pendleton’s two touchdowns in the second quarter, he felt good about Baker’s position, trailing 28-12 at halftime.

“We just felt like if we went out and put another score on the board, we can get back into the game, so it was just a matter of adjusting a little bit to their defensive adjustments and how we were going to attack that, and try to clean up our defensive alignments and miscues,” Ramos said.

In the loss was a lesson, he said.

“We have to play clean and we have to execute within our gameplan in order for us to be in a ballgame with a team like Pendleton,” he said.

Baker concludes its season this Friday, April 9 at 7 p.m. at La Grande.

“We got some work to do on the defensive side of the ball this week, so we are going to try to get better this week,” Ramos said. “Offensively we are just going to be fine-tuning what we are already doing. We are familiar with La Grande in terms of what they do. We will get a good look at them on film and see what we need to do this week, and just have a good week of practice.”

Annie Fowler of the East Oregonian contributed to this story.