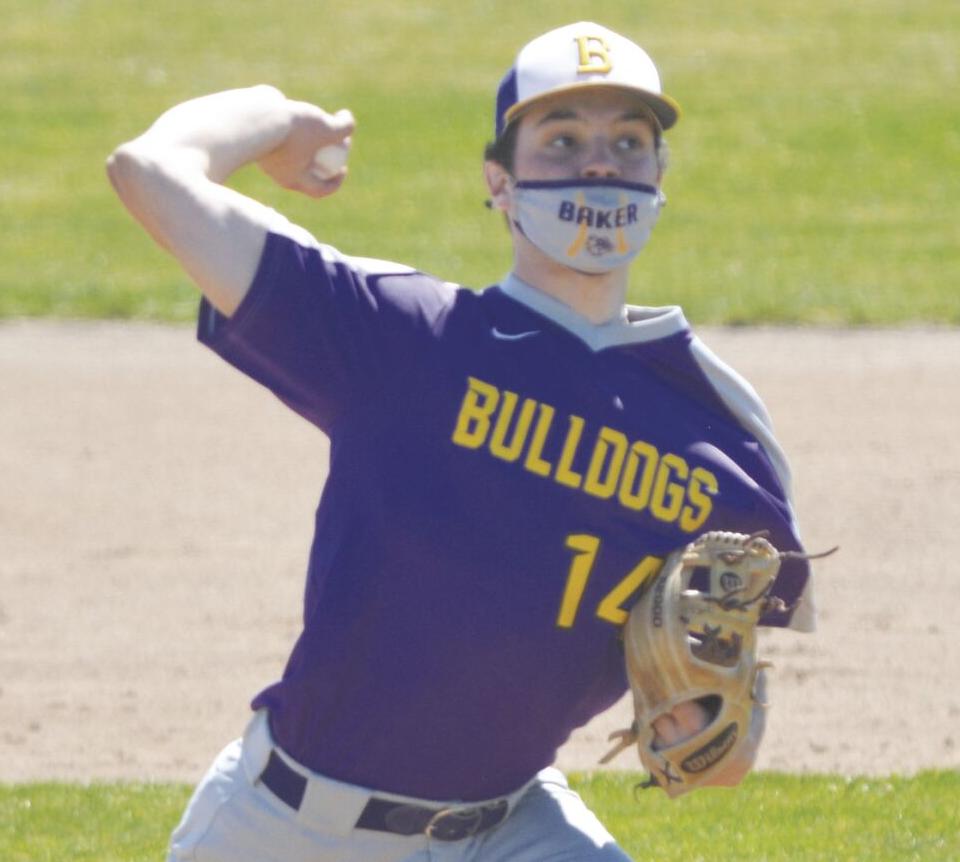 Andrew Zellars allowed only one hit in 4.1 innings against Ontario on Saturday, April 17. 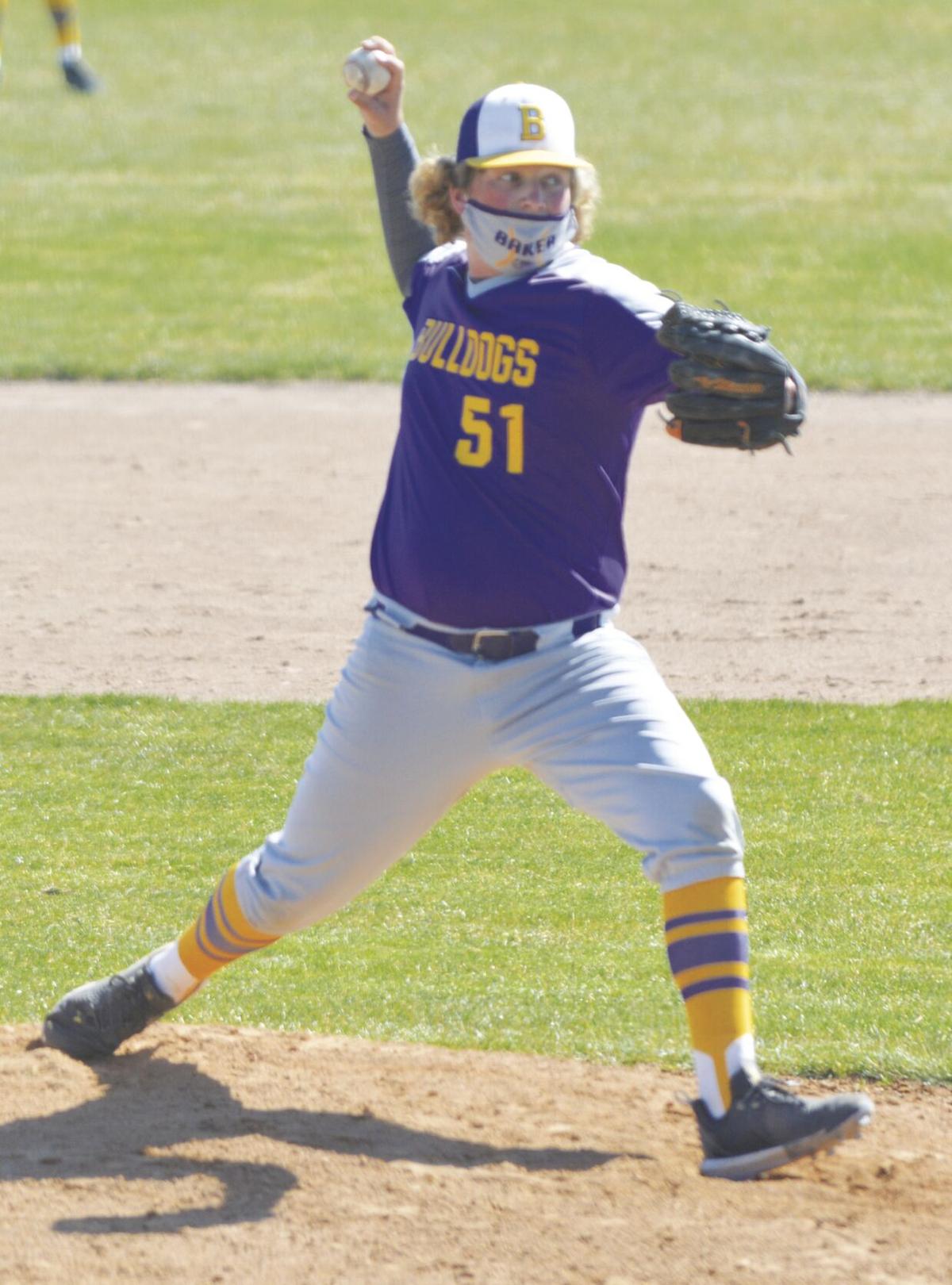 Cody Skidgel scattered seven hits over 5.1 innings and earned the win against Ontario in the second half of a doubleheader on Saturday, April 17 at the Baker Sports Complex. Skidgel also drove in a run. 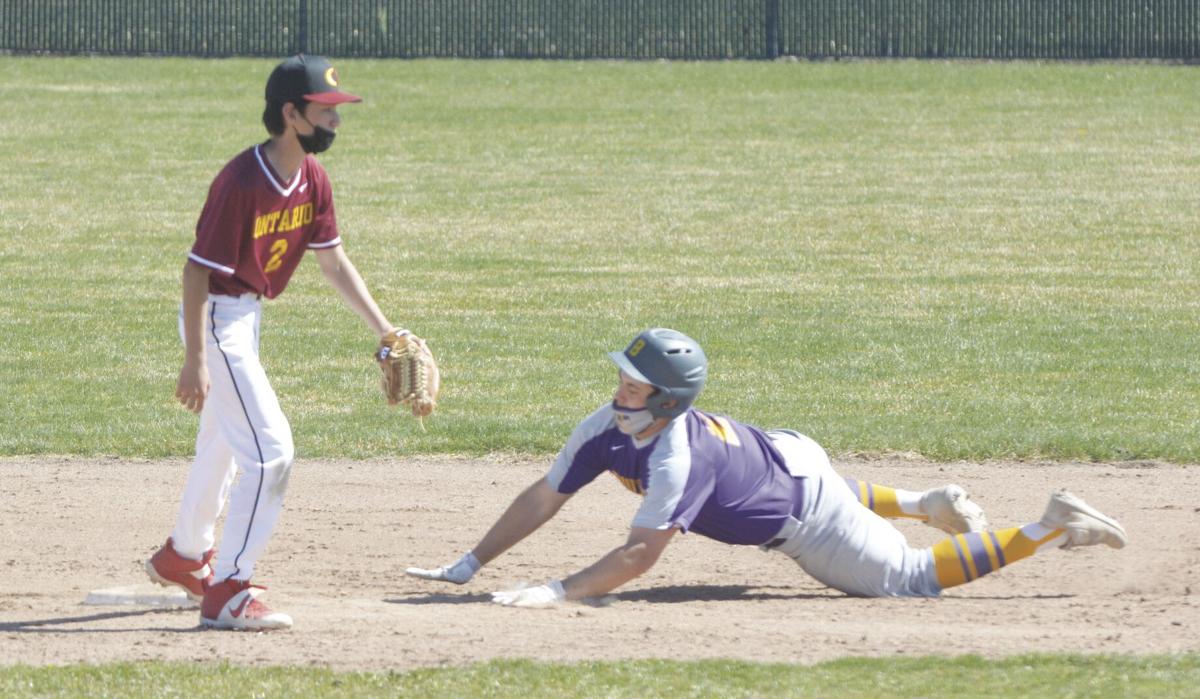 Andrew Zellars allowed only one hit in 4.1 innings against Ontario on Saturday, April 17.

Cody Skidgel scattered seven hits over 5.1 innings and earned the win against Ontario in the second half of a doubleheader on Saturday, April 17 at the Baker Sports Complex. Skidgel also drove in a run.

Baker opened its Greater Oregon League baseball schedule with a 12-0, 9-2 doubleheader sweep of Ontario Saturday, April 17 at the Sports Complex.

A trio of Baker pitchers — starters Andrew Zellars and Cody Skidgel, and reliever Zander Arriaga — combined to limit the Tigers during the twinbill as Baker improved its overall record to 3-0.

Zellars allowed only one hit and no runs in the opener.

The Bulldogs took a 3-0 lead after one inning and never looked back.

“We want to be disciplined when we get free bases, we want to run, execute hit and runs and do that kind of stuff,” Smith said. “It allowed us to do that a little more frequently in that first game. Their starter had some trouble and I thought we took advantage of that.”

Zellars, who tossed three innings in Baker’s 14-10 season-opening win at Grant Union on April 14, had no such problems in his 4.1 innings of work against Ontario.

Zellars, a senior, struck out eight.

“I’m very fastball dominant,” Zellars said. “I know that if I start off with my fastball, and be able to locate it well and be able to keep people off balance with that, and come in and bring in the off-speed, being really good changing up speeds, that’s really all I focused on.”

Smith was impressed with Zellars.

“You can see it as the game went on, he had a lot of confidence,” Smith said. “He’s a solid pitcher when he’s on his game.”

After a scoreless second inning, Baker exploded for seven runs in the bottom of the third to boost its lead to 10-0.

Again the Bulldogs benefited from multiple walks — Ontario pitchers had 13 in the game.

Zellars said the big lead gave him confidence on the mound.

“In terms of getting me some insurance runs it was awesome, big pressure comes off your shoulders when you see the numbers start to rise and trying to keep a level head and don’t do too much,” Zellars said.

Arriaga replaced Zellars in the fifth inning and shut out the Tigers, and the game ended by 10-run mercy rule after five innings.

Although Ontario pitchers gave Baker all those walks, the Bulldogs took advantage at the plate.

Arriaga went 2-for-3 with two RBIs, and leadoff hitter Hayden Younger also drove in two runs on a double.

Skidgel was dominant through three innings, but unlike in the opener, Ontario’s starter, Nick Esplin, was also solid, keeping Baker off the scoreboard.

“I knew that he (Esplin) was their ace, I was kind of surprised he didn’t throw game one,” Smith said.

The Tigers took a 2-0 lead with a pair of runs in the top of the fourth — their only runs of the day.

Esplin did the damage, taking a Skidgel pitch over the wall in right-center.

“We missed a spot, and he (Esplin) turned on it and drove it well,” Smith said.

But Baker responded immediately with three runs in the bottom of the fourth.

Skidgel then settled in, shutting out the Tigers in the fifth and continuing into the sixth, when Arriaga relieved him with one out.

“He (Skidgel) has really come around with his mechanics so he can rely on that, knowing he can just throw the baseball,” Smith said.

“I was kind of relaxed, don’t want to get too wild and stuff and keep my head clear,” Skidgel said.

Zellars said he was impressed with Skidgel’s ability to shrug off the home run, saying his teammate took to heart what assistant coach Al McCauley preaches in practice: that home runs are just accidents.

“It’s very big for him to keep a level head,” Zellars said of Skidgel. “It’s really about wiping it off, having a short-term memory and then just going back to war.”

Baker extended its lead with a run in the fifth and five more in the sixth.

Connor Chastain went 2-for-3 with two RBIs, and Van Arsdall, Zellars, Wright and Skidgel each drove in a run.

“It helps a lot, makes you feel good about yourself, and keeps your head up,” Skidgel said.

Arriaga struck out three in his 1.2 innings. In his two relief stints he struck out five in two innings.

Smith said he was pleased with Baker’s performance during its first games at the Sports Complex in almost two years.

“This is a great start for us, I’m happy for them, they played great,” Smith said.

Baker’s homestand continues this afternoon when the Bulldogs play host rival La Grande for a doubleheader, with the first pitch set for 3 o’clock.

Today’s games are the first of the season for La Grande.

“It’s always the World Series when you play La Grande,” Smith said. “This momentum will carry us in, we will have confidence going into La Grande.”

Zellars is excited about the hot start the team has had on the diamond, but he wants to remain grounded with tougher opponents, including La Grande, slated in the coming weeks.

“It’s really important for us to think we are going in 0-0, it’s a brand new ball game, and just go out there and hit the ball well, do well on defense and have a good time,” Zellars said.