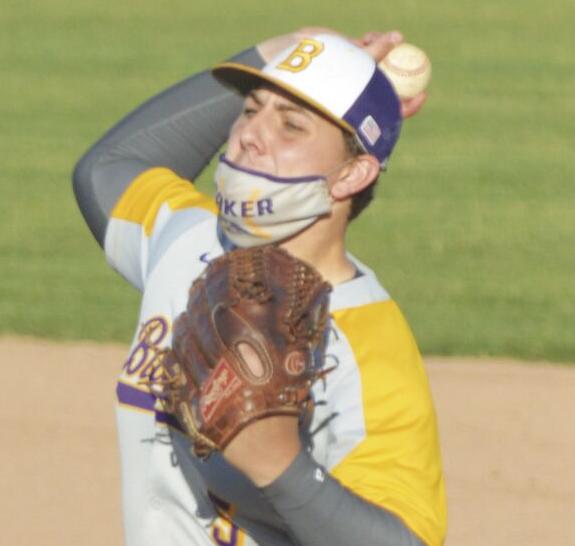 Baker’s Mason Van Arsdall, who usually plays catcher, was the winning pitcher against Nyssa on Tuesday, April 27. He struck out nine in five innings. 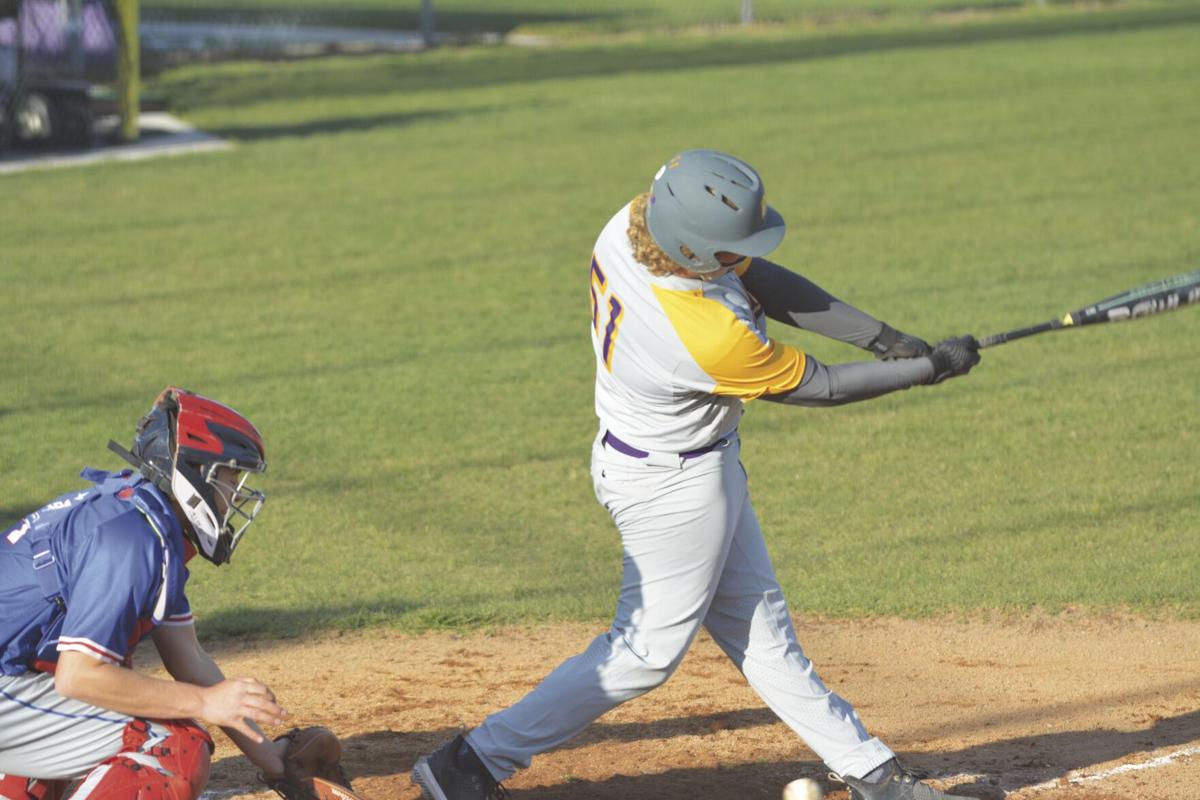 Baker’s Cody Skidgel fouls off a pitch against Nyssa on Tuesday, April 27.

Baker’s Mason Van Arsdall, who usually plays catcher, was the winning pitcher against Nyssa on Tuesday, April 27. He struck out nine in five innings.

Baker’s Cody Skidgel fouls off a pitch against Nyssa on Tuesday, April 27.

After almost a week since their last contest, the Baker baseball team didn’t show any signs of rust in routing Nyssa 11-1 on Tuesday, April 27 at the Baker Sports Complex.

Baker improved its season record to 4-2. Nyssa dropped to 0-6.

“It’s kind of weird. I haven’t pitched in a really long time. Being on the mound is weird because I’m always behind the plate,” Van Arsdall said.

Baker also failed to score in the first two innings. But in bottom of the third, after Andrew Zellars got on base, Jake Wright found a fastball to his liking from Nyssa pitcher Collin Hysell, crushing the ball over the left field wall for a two-run homer.

Prior to Wright’s blast, Smith was disappointed in his team’s sluggish start offensively.

“We started out awful slow,” Smith said. “That’s two dates now that we came out not ready to go.”

Nyssa scored its only run in the top of the fourth to briefly cut Baker’s lead to 2-1.

But Baker responded immediately with five runs in the bottom of the inning.

With the insurance runs, Van Arsdall continued to hold Nyssa at bay. He allowed just four hits and struck out nine.

Van Arsdall credited his battery mate in Zellars, who is one of Baker’s top pitchers, and Baker’s defense.

“Zellars did a really good job sticking the ball where it was — he got me a lot of strikes I didn’t know I would have had with anybody else back there,” Van Arsdall said. “I just had a lot of good back up behind me tonight.”

Baker continued its offensive momentum with four runs in the bottom of the fifth to end the game by 10-run mercy rule.

Zander Arriaga led the way going 3-for-4 with four RBIs.

Hayden Younger was aggressive on the basepaths with three stolen bases.

“I thought Hayden Younger was a spark on the bases, he’s just a go getter,” Smith said. “He runs the bases like we want everyone to run the bases.”

Smith was also happy with Baker’s offensive performance in the final three innings.

“We finally started to put the ball in play and capitalize on their mistakes,” Smith said.

He was impressed with the work of sophomores Kai Ogan and Thomas Smithson, who moved up from junior varsity for Tuesday’s game.

“I thought they did a good job for us,” Smith said.

Baker now welcomes rival La Grande to the Sports Complex for the teams’ second doubleheader, this one set for Saturday, May 1 with a first pitch at noon.

La Grande dominated the first twinbill against Baker on April 20, winning 16-3 and 18-3.

Van Arsdall said Baker’s performance against Nyssa, despite the score, won’t be good enough against the Tigers.

“We had way too many K’s today, backward K’s, backward K’s are the worst, against a team like La Grande, they will make us pay,” Van Arsdall said.

“We are going to work on early count hitting, early count pitching, we want to throw strikes, (and) we did not do that against La Grande,” Smith said. “We can’t put La Grande on the bases, we can’t give up any freebies.”

“I haven’t pitched in a really long time. Being on the mound is weird because I’m always behind the plate.”

Laird wins SEC Freshman of the Week for fourth time