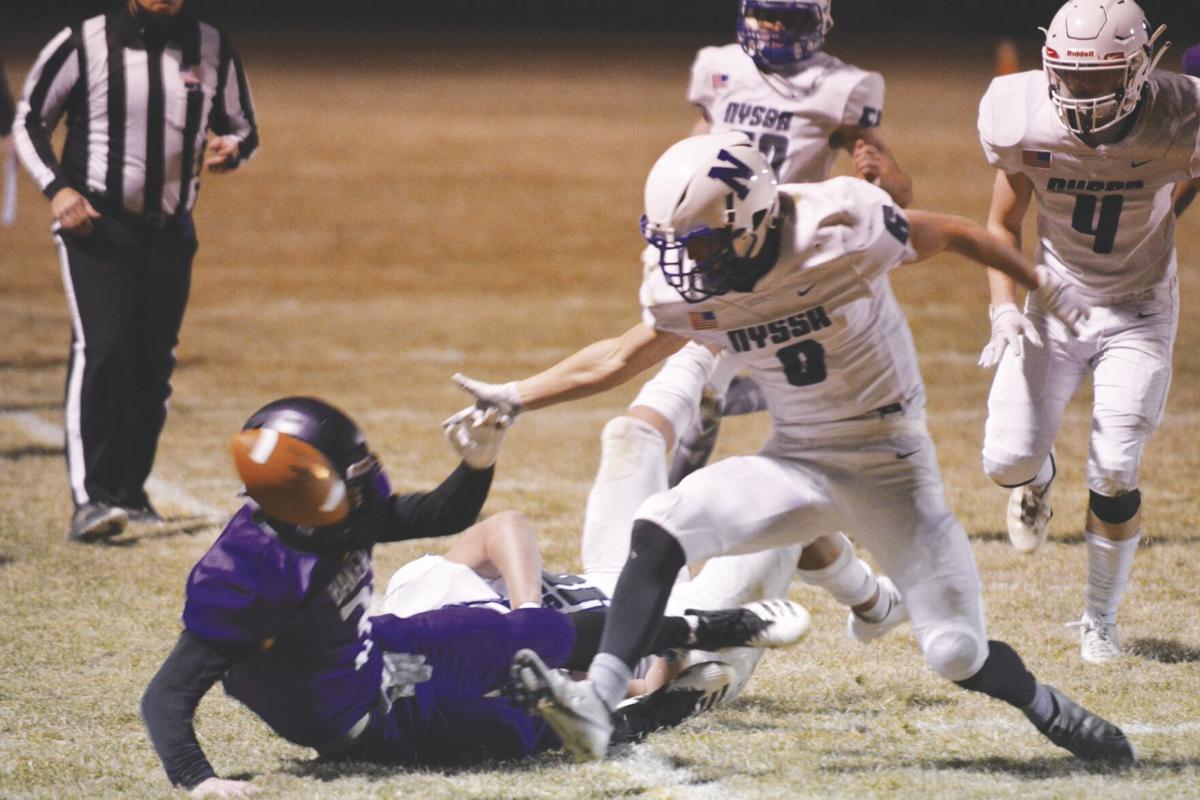 Baker quarterback Gabe Gambleton, left, gains yards against Nyssa on Friday, March 20. There was no fumble as Gambleton was already out of bounds. 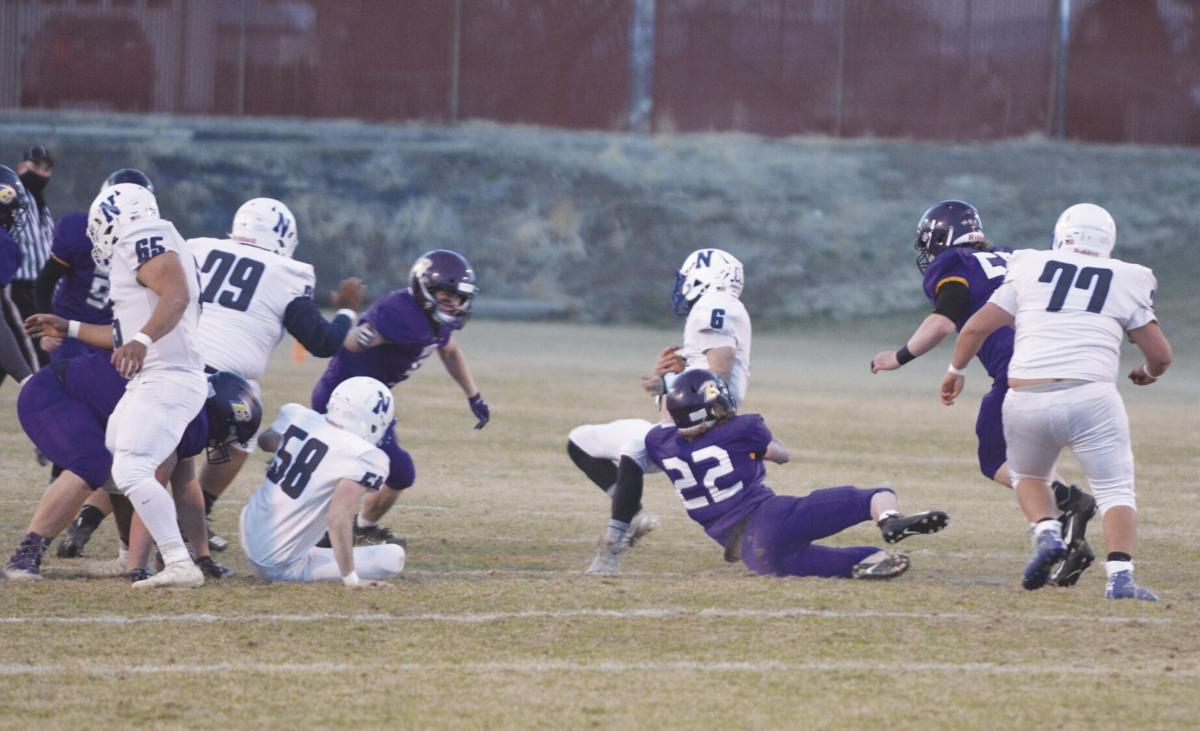 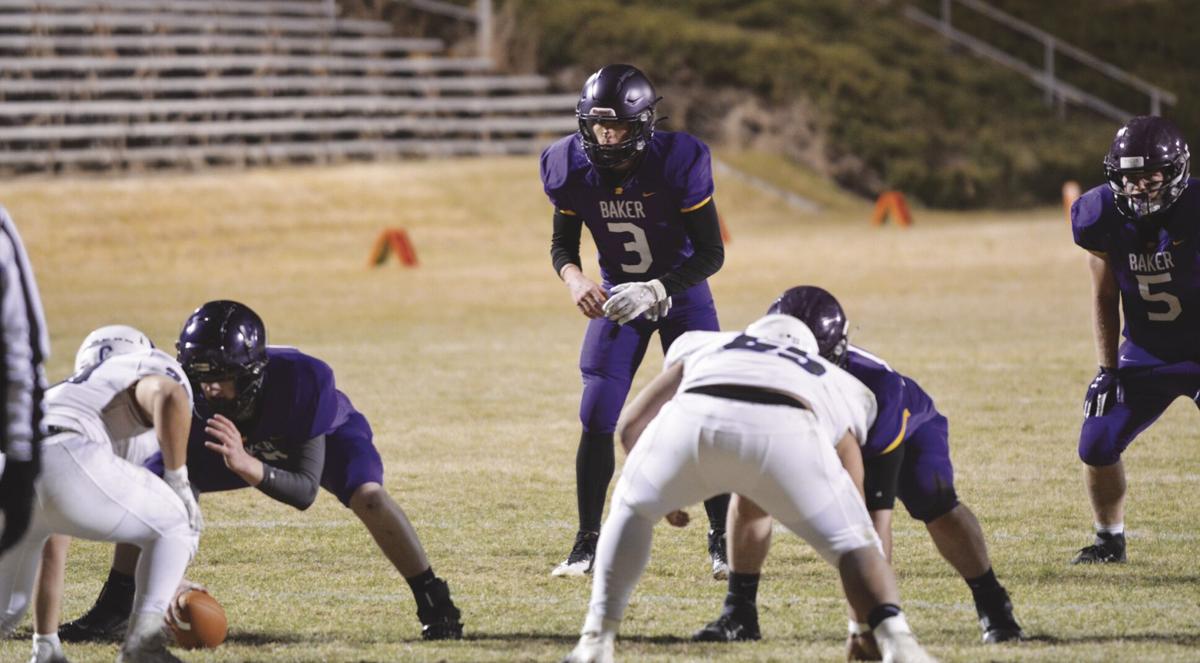 Baker quarterback Gabe Gambleton, left, gains yards against Nyssa on Friday, March 20. There was no fumble as Gambleton was already out of bounds.

For the first time in 17 months the gates opened at Baker Bulldog Memorial Stadium, and the fans who arrived Friday evening, March 19, were treated to a thriller as Baker rallied late to nip Nyssa 28-22 in overtime.

Senior Gabe Gambleton scored both the game-tying and the winning touchdowns, and he had a key interception in overtime to lead Baker to its first win after starting the pandemic-shortened season with road losses to Vale and North Bend.

“I’m just happy for them, being at home, having some folks in the crowd which was nice, and (they) brought the energy to the stadium. I’m just so happy to finish the game,” Baker coach Jason Ramos said.

Nyssa sophomore quarterback Andrew Enders scored on a 6-yard run early in the fourth quarter to break a 14-14 tie. The two-point conversion gave Nyssa a 22-14 lead.

There the score remained until just two and half minutes were left on the clock.

Then Gambleton, who played both quarterback and receiver, took over.

He led Baker down the field on a drive that culminated in his 2-yard touchdown run that cut Nyssa’s lead to 22-20.

Then Gambleton ran the ball in for the tying two-point conversion.

Nyssa moved the ball in the final minute but Baker’s defense was able stop the threat and force overtime.

Baker won the coin toss and elected to start on defense.

“We just told our defense, you got to get a stop, go get a stop and we will punch it in, and score to win this game,” Ramos said.

On Nyssa’s third play, Gambleton snared a pass, his second interception of the game.

That gave Baker the ball and a chance to win the game with a score.

Gambleton took advantage of the opportunity.

His 3-yard touchdown run touched off a celebration that Baker, and its fans, have been waiting for since 2019.

After the exciting win over Nyssa, Gambleton is ready to get back on the field and ride the wave of momentum with his teammates.

“Only good things from here, just watch out,” Gambleton said.

Ramos said that during practices last week leading up to Friday’s game, the Bulldogs focused on fixing mistakes from the first two games.

“We focused on just executing our stuff better than we have been,” Ramos said. “We learned a lot from the film we watched last week and just came out committing ourselves to getting better at what we are trying to do.”

Just two minutes into the game Nyssa got on the board first when Enders connected with junior wide receiver Landon McDowall on a 50-yard touchdown pass to give Nyssa a 6-0 lead. The two-point conversion try failed. Vale led 6-0 after the first quarter.

Baker responded in the second quarter when freshman quarterback Paul Hobson found Gambleton for a 45-yard touchdown pass. Andrew Zellars booted the PAT to give Baker a 7-6 lead.

Nyssa struck again on another Enders touchdown pass later in the second quarter. This time the two-point conversion was good, and Nyssa led 14-7.

With the seconds ticking away to halftime, Baker moved down the field and Gambleton, who replaced Hobson at quarterback, hit senior Kaden Myer for an 18-yard touchdown pass. Zellars’ kick tied the score at 14 at halftime.

The touchdown was exciting for another reason, as Myer, who missed the North Bend game after injuring his shoulder in the season-opener at Vale on March 5, returned. Although Myer wasn’t able to play quarterback, he returned to receiver, a position he excelled at as a junior.

“Having Kaden back obviously helped us tonight, and having him back even in a limited role, he’s a playmaker and if we can get him the ball, good things will happen,” Ramos said.

After the back and forth scoring of the first half, the second half was a different matter.

The teams traded interceptions, each getting two thefts during the scoreless quarter, setting up the thrilling final period and overtime.

“The defense was huge tonight,” Ramos said. “We gave up some plays, but we made some plays, we challenged them this week and this game to be more aggressive and take some chances, because we need our defense to step up and make big plays and they did tonight.”

Baker was dominant at times offensively, particularly on the ground.

“All credit to the O-line, those guys played their butts off, we ran the ball because of them,” Gambleton said.

Senior Carlos Delarosa had seven catches for 116 yards and Myer had five receptions for 67 yards.

Baker’s offensive advantage was offset somewhat by penalties, as the Bulldogs committed 14 for 118 yards compared with Nyssa’s five for 55 yards.

Baker now prepares for its second, and final, home game, this Friday, March 26 against Ontario. Kickoff is set for 7 p.m.

“We still have some things to work on,” Ramos said. “I just think it’s going to be a weight lifted off their shoulders after the first couple of weeks where we felt like we gave a couple of games away just with our own mistakes. They’re going to be happy, they’re going to be jazzed. We are missing a couple of guys but we are battling through adversity and next guy up.”

“I’m just happy for them, being at home, having some folks in the crowd which was nice, and (they) brought the energy to the stadium.”

Missouri baseball running out of hope

A year after transferring from CSU, Husker OL Nouili has the look of 'a real dude'