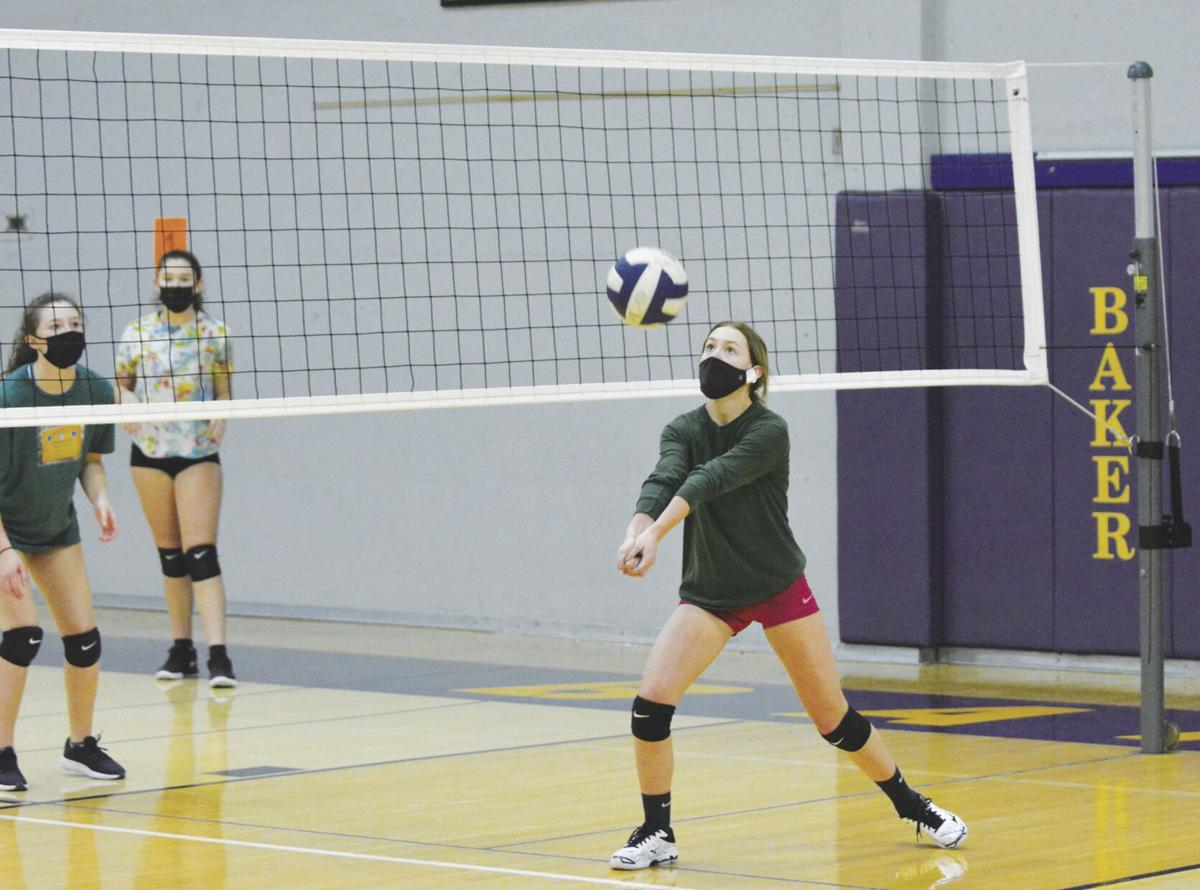 Gretchen Morgan bumps the ball during a volleyball practice at Baker High School on Feb. 24. At far left is Fern Bruck, and Montana Williams is in the background. 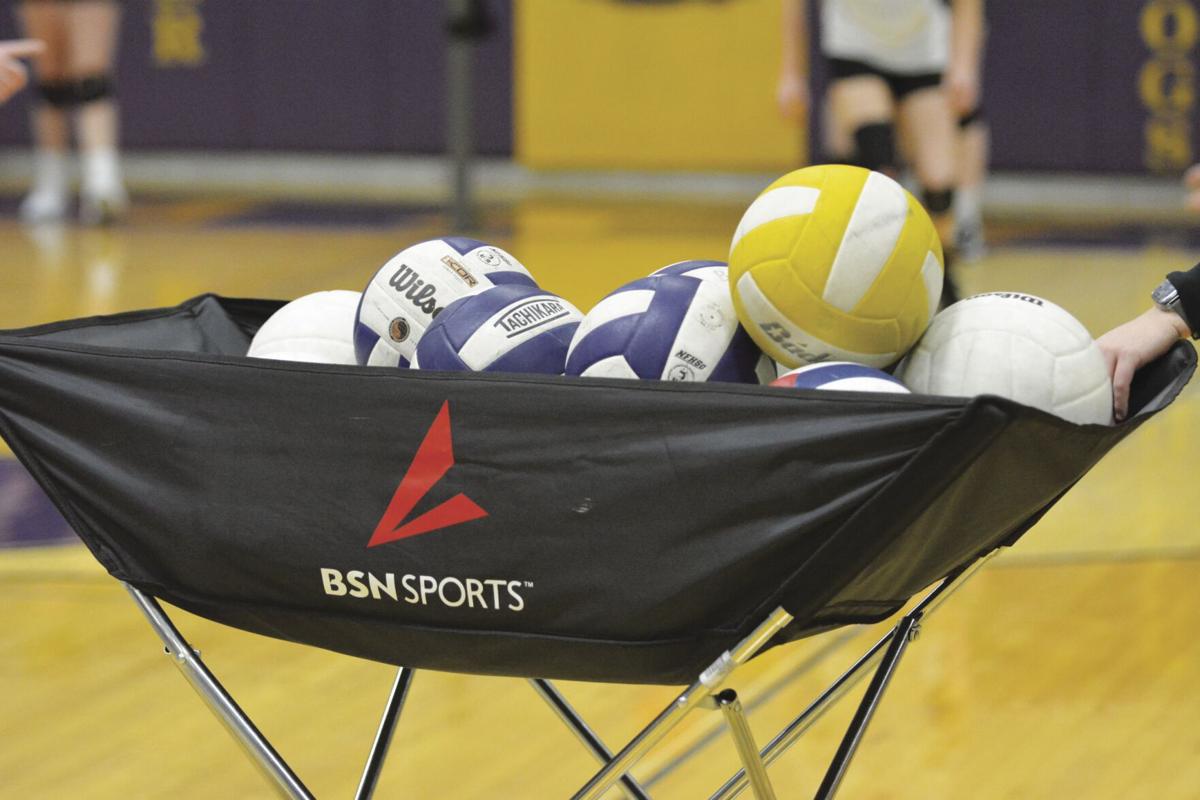 Baker's volleyball team is scheduled to play host to Burns on March 2. 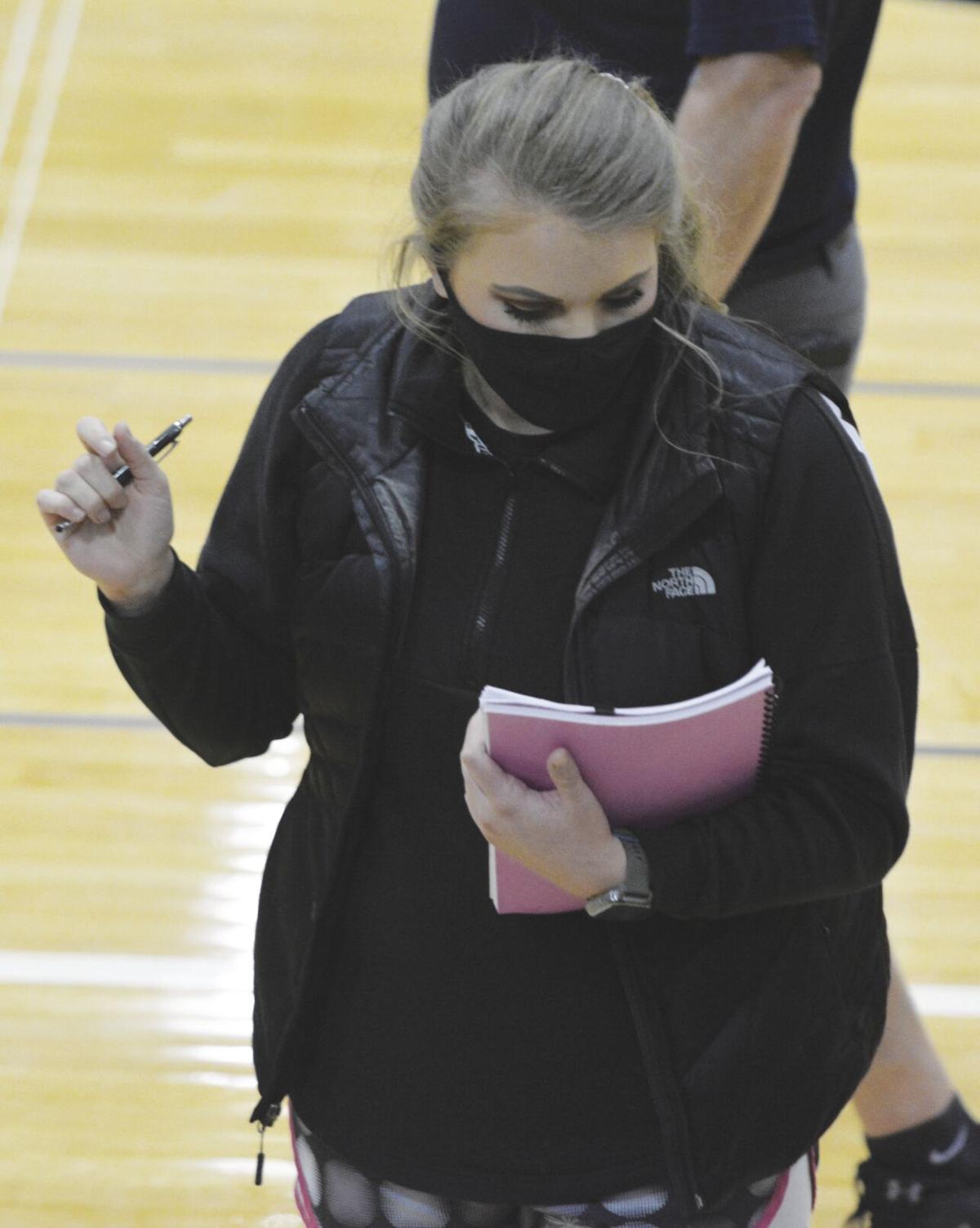 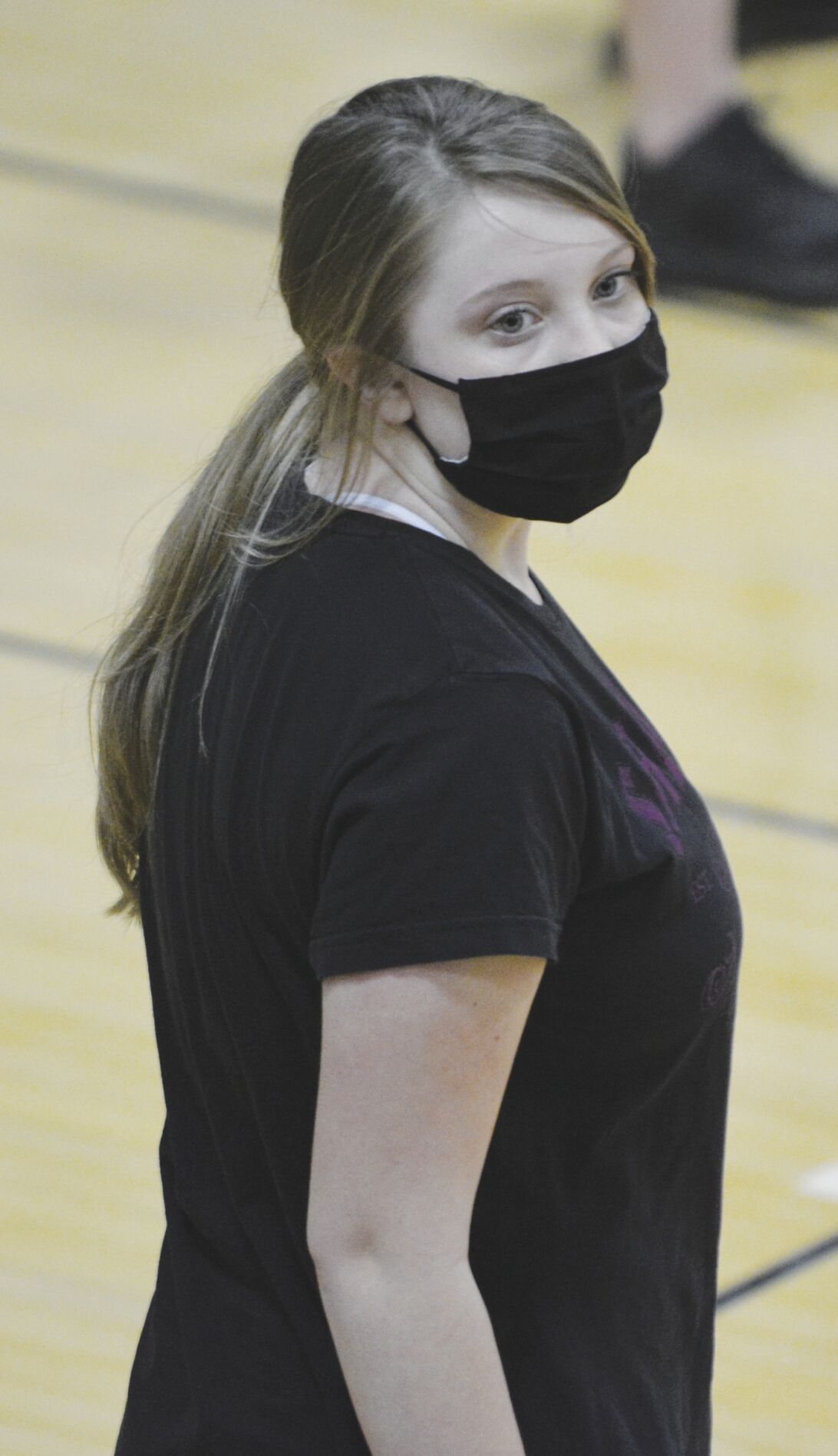 The Baker High School volleyball team has a lot to get used to during a season first postponed, and now shortened, by the pandemic.

The new experience of playing while winter, not summer, is waning.But both the Bulldogs and their new coach, Ali Abrego, are excited to be back in the BHS gym, practicing in preparation for their first match, set for March 2 at 5 p.m. at home against Burns.

“I’m grateful because it is my last year,” senior Hayden Paulsen said. “It’s depressing that I don’t get the actual season but I am very grateful that I get to be back in the gym with my team.”

“We’ve had to find ways to work around all of these regulations, and finding ways to structure practices that both focus on the athletes’ physical but also mental health. I feel grateful for the opportunity but I am going to let the athletes speak for themselves because they are gifted.”

Abrego, who is a special education teacher at Baker Middle School, is working with a young roster, including multiple sophomores.

“It’s really fun having a new coach, she’s hard on us which is really good, and she goes straight to the point and I love her as a coach,” said one of those sophomores, Macey Moore.

Abrego was able to get acquainted with her team last fall during a five-week mini-season.

Practice for the regular season, which includes 12 matches scheduled between March 2 and April 5, started Monday, Feb. 22.

“I’m really thankful we had those five weeks in the fall to kind of get a preview of what we would be seeing,” Abrego said on Wednesday, Feb. 24. “What we saw in the fall has improved over the last few days I have seen the kids.”

Although Baker’s schedule includes just four matches against Greater Oregon League opponents — two each against Ontario and La Grande — Abrego is confident the Bulldogs will rise to the challenge of an abbreviated season.

“We practice to compete and we play to win, no matter what the circumstances,” Abrego said. “My job is to teach the athletes the skills they need to do that themselves.”

Sophomore Rylee Elms said she’s excited to play schools that Baker might not face during a normal season.

The Bulldogs have matches scheduled against Union, Vale and Nyssa, as well as Burns.

“We have always played the same teams, except for when we go to state. It’s always fun to walk into the gym and not know what you are up against,” Elms said.

But the Bulldogs are also eager to square off against traditional rivals such as La Grande.

“I’m really happy to play La Grande, I love playing them,” Moore said. “It just brings a light to our team, and we get super hyped.”

A big challenge for Abrego is expediting the learning process, with less than two weeks of practice before the opening match.

“It’s a good learning curve for us in order to be mentally tough, and mentally sound,” she said. “We are going to take it one game at a time and really set the tone for the future. We are such a young group.”

In her final year donning the purple and gold, Paulsen said she has three goals this season.

“Definitely we want to win because why not?” she said. “But also work on teamwork, be a family and love your team as family. Lastly just have fun, because for me it’s my last year I don’t want to remember (it) as something I didn’t enjoy.”

Elms said she is confident that the Bulldogs, despite the challenges of an abbreviated practice schedule, will build trust with each other during the heat of competition.

At this point, Baker High School doesn’t plan to allow spectators at volleyball matches and other sporting events.

Volleyball players will have to wear masks.

But even with the unusual aspects of this season, Abrego said she sees it as a “unique opportunity.”

“We’ve had to find ways to work around all of these regulations, and finding ways to structure practices that both focus on the athletes’ physical but also mental health,” Abrego said. “I think everyone is pretty eager since we are in the low-risk category, everyone is pretty eager to get after it and see what we have. I feel grateful for the opportunity but I am going to let the athletes speak for themselves because they are gifted.”

‘Under construction’: Work is ongoing for Arizona Wildcats QBs as spring winds down