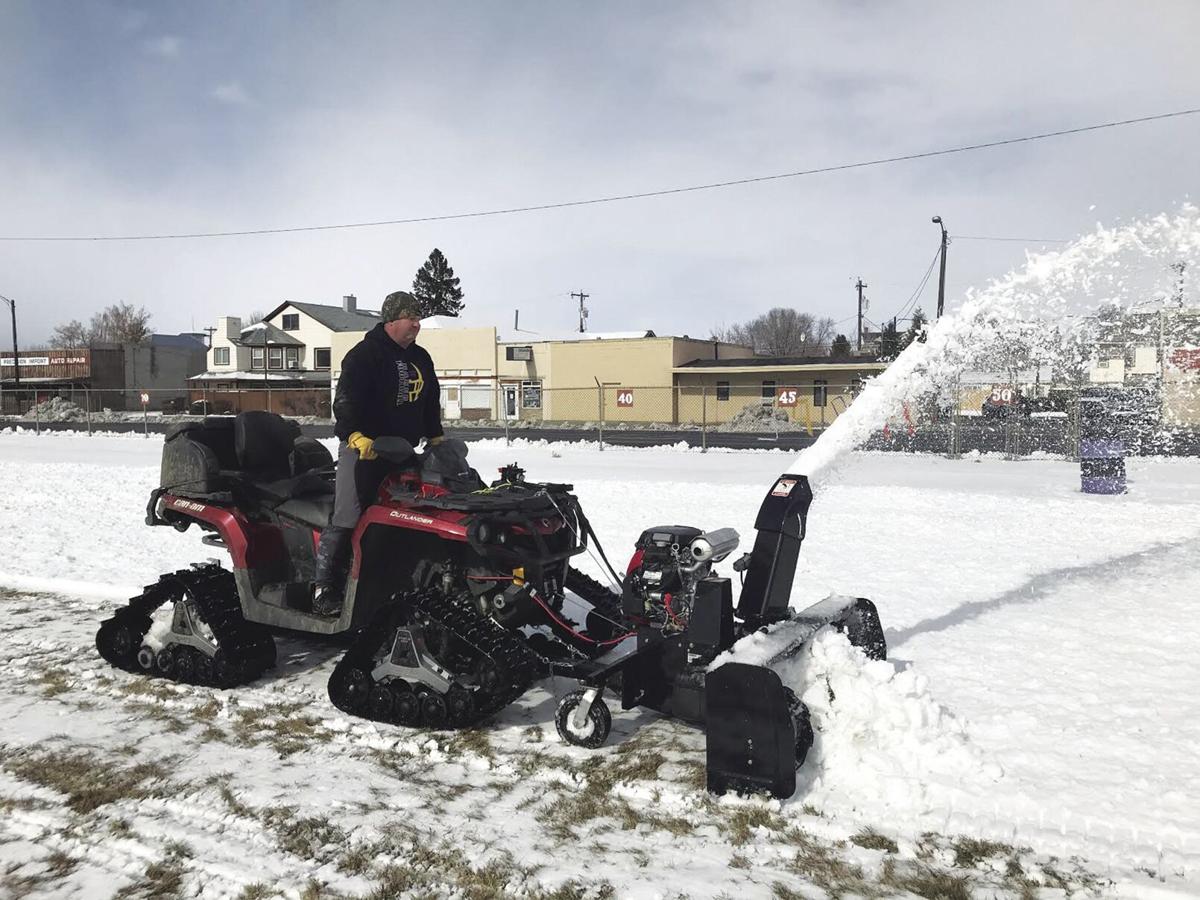 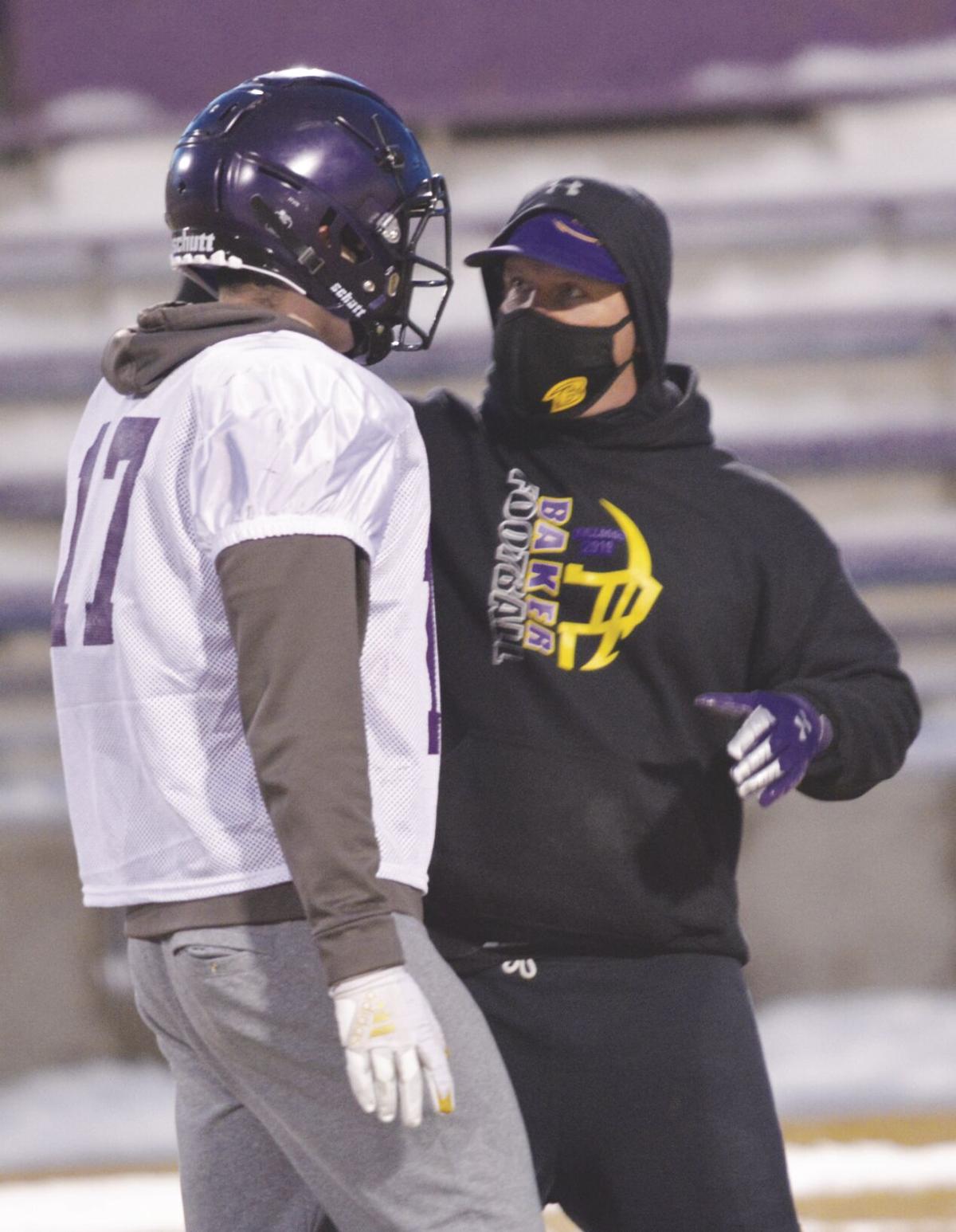 Travis Bloomer is the rare football coach whose work preparing his players includes driving an ATV connected to a snow blower.

But then Bloomer, an assistant on varsity head coach Jason Ramos’ staff at Baker High School, didn’t expect to coach in a season that started in the depths of winter.

“It’s for the kids, it’s for their souls right now. I believe that firmly.”

When he’s not in the fast-paced world of real estate, Bloomer, who’s a BHS graduate and former standout football player, spends a lot of his free time as a coach.

And when heavy snow fell in Baker City around the time the Bulldogs started practice for their pandemic-abbreviated season, Bloomer was happy to volunteer his time and his ATV, which is equipped with tracks instead of wheels.

“I had the equipment, so it wasn’t a big deal for me, it was just I felt that it was my job to do it,” Bloomer said.

He has removed snow from the football and soccer fields at BHS, as well as the football field at Baker Middle School.

Ramos, in his second year as varsity head coach, wasn’t surprised that Bloomer offered to make sure players weren’t slogging through ankle-deep snow and slush.

“That’s what Travis does, he just steps up and fills any need that’s there, even without being asked,” Ramos said.

Bloomer said he was motivated largely by the bond he has developed coaching many of the Bulldogs over the years, including his son, Gauge, a junior running back and linebacker.

Travis Bloomer said he wants to ensure the players have the best experience possible after their usual season was canceled due to the pandemic in the fall of 2020.

The Bulldogs, who haven’t played in a game since November 2019, return to action Friday, March 5, at Vale.

“It’s for the kids, it’s for their souls right now. I believe that firmly,” Bloomer said.

Gauge Bloomer said his dad has been involved in his athletic pursuits since Gauge was a fourth-grader, and he’s grateful to have his dad as a coach. He said he wasn’t especially surprised when his dad volunteered to clear snow from fields.

Travis said it takes about four hours to clear snow from one field. The biggest challenge, he said, is laying out a grid to follow with the blower.

“Every time you throw snow, snow packs, and then it’s harder to throw a second time,” Bloomer said. “Well, there’s at least three throws to get it off the field when you start in the middle. So it’s how you grid that.

“The biggest thing is the thinking part, how do I go about doing this efficiently so I can actually get it off the field, because if you throw it too many times, it won’t throw,” Bloomer said. “That was a hard learned lesson on that field.”

Then there are the potential obstacles hidden by the snow and capable of lodging in the snowblower’s rotating auger.

“Probably one of the tougher things is when you catch a football glove or a face mask or a dog stick in the auger, it can slow you down, but it’s worth it,” Bloomer said.

He emphasizes that he didn’t work alone.

“That’s my family, those boys just picked up shovels and came,” Bloomer said. “The coaches have their backs and they have ours.”

Ramos said he’s grateful to have a coaching staff that sacrifices so much time, including outside of practices, to help students.

While Bloomer worked on the field at Baker Bulldog Memorial Stadium, lineman coach Rick Ritter set up portable lighting at the practice field.

“Why we all do this is certainly not for a paycheck, but it’s for all the important things that come along with it,” Ramos said. “It’s the relationship with the kids, and doing what’s best for the kids in the program, and making it a positive experience for everybody.”

Now that the fields are snow-free, Bloomer is looking forward to the Bulldogs returning to the field for an actual game.

“We are just grateful that whoever is in charge is allowing us to play,” Bloomer said. “That’s our overall message, you are going to get hit in life with obstacles that may not seem that there’s anything that you can do but within the legal parameters and realms you can still figure out ways to get them done.”

Although the weather has been relatively tranquil the past week, if another snowstorm bears down on Baker City this month, you’ll probably have a chance to see Bloomer driving his snowblower at the stadium, a smile on his face.

'A freak of nature': Transfer Kolarevic has fit in well to suddenly veteran Husker ILB room

A look at the nine (well, maybe 10) OLs in Austin's top group and how the puzzle pieces fit