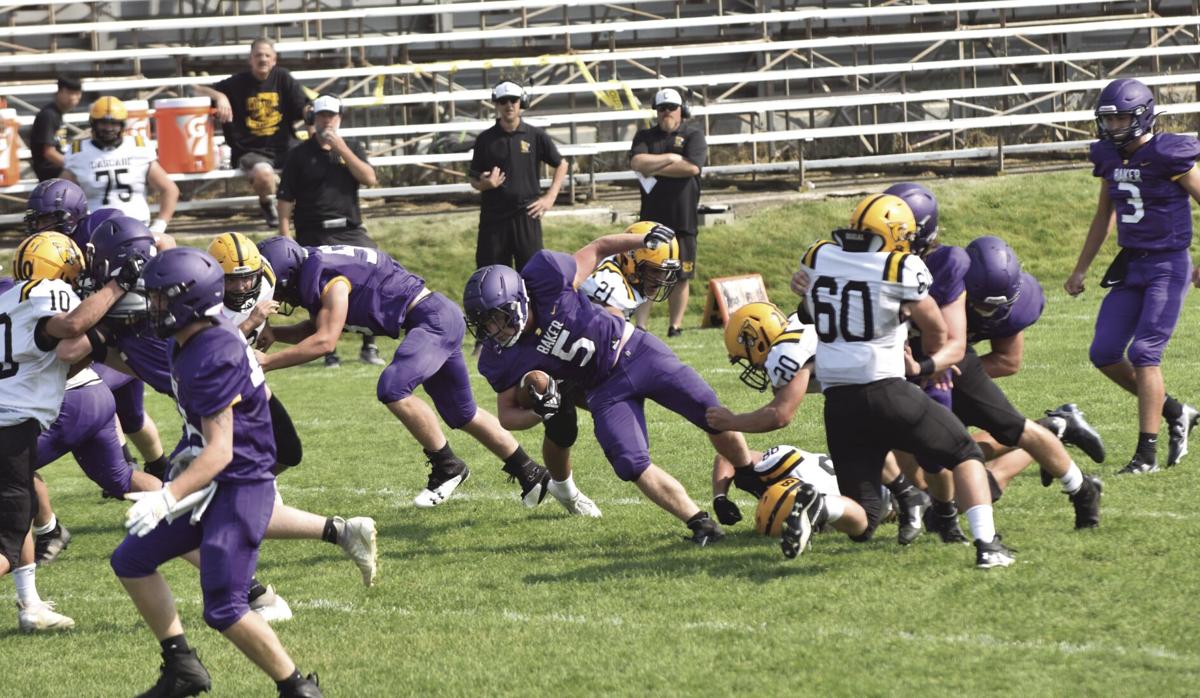 Baker senior running back Gauge Bloomer, No. 5, had little room to run against the stout Cascade defense on Saturday, Sept. 4 at Baker Bulldog Memorial Stadium. 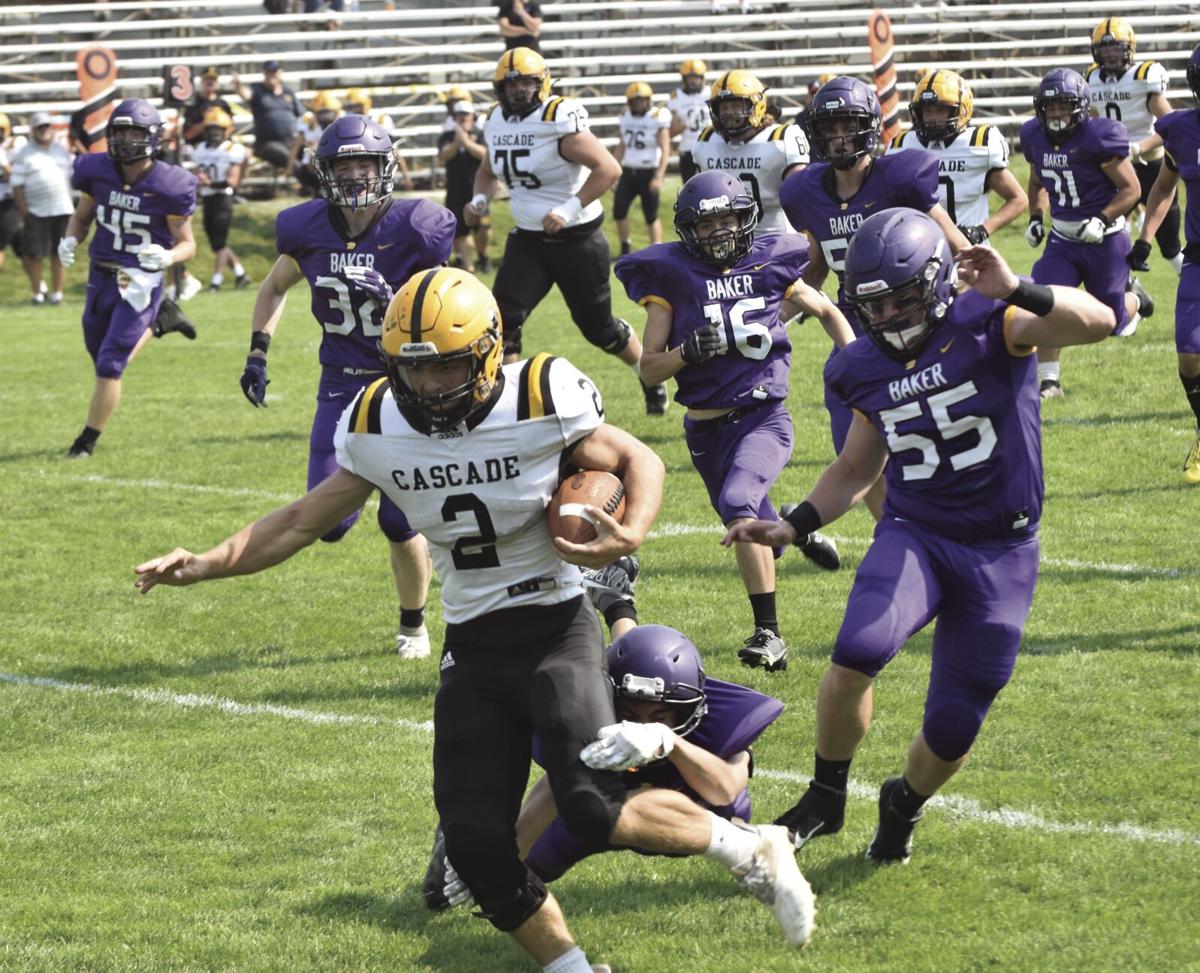 Cascade's trio of senior running backs, led by Blake Lewis, gained more than 200 yards on the ground during a 35-0 win over Baker on Saturday, Sept. 4. Lewis, who scored three of Cascade's five touchdowns, is pursued here by Bulldogs including Alex Ritter, No. 55, Drake Harper, No. 16, and Tate Powell, No. 32. 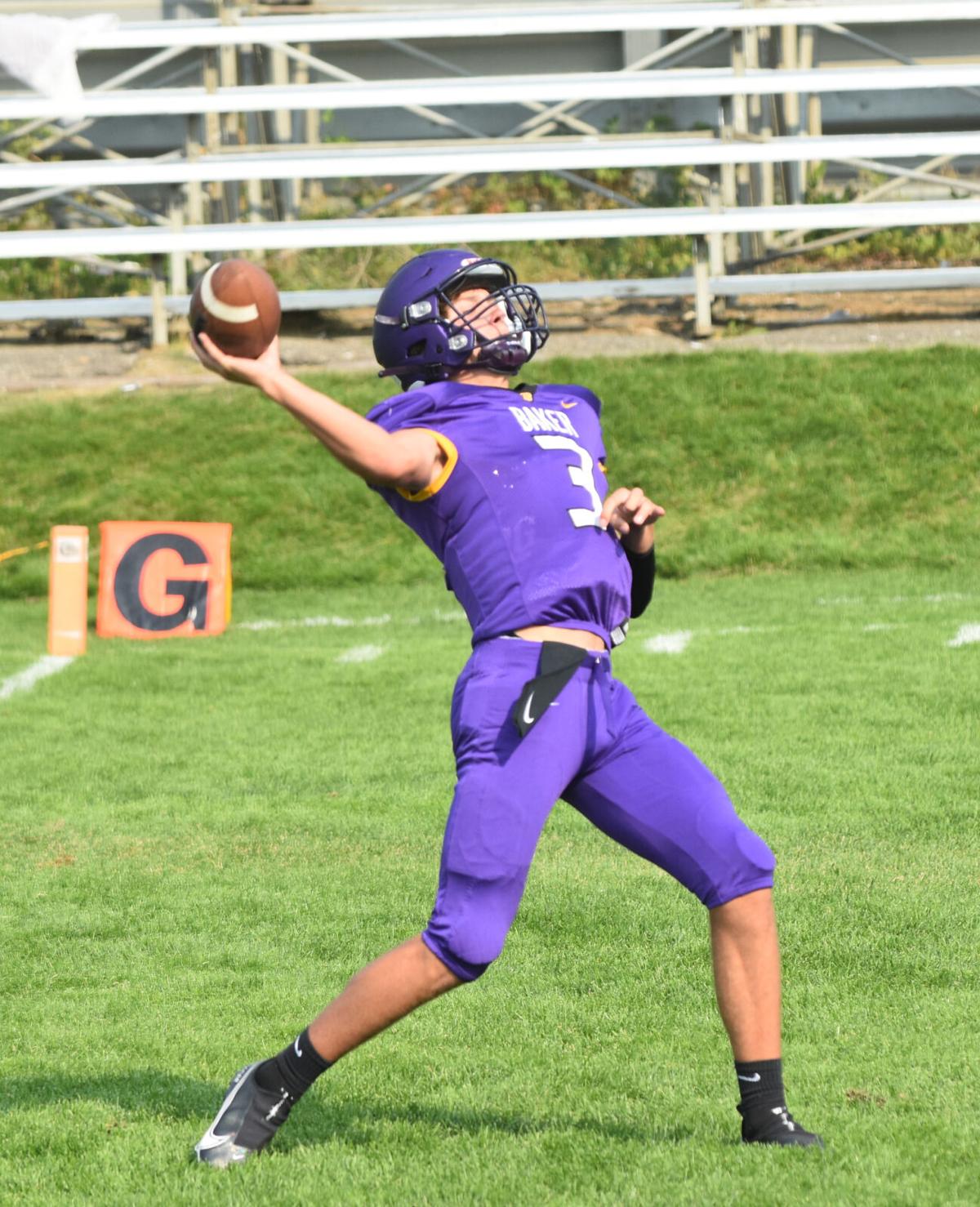 Baker sophomore quarterback Paul Hobson throws from near his own goal line on Saturday, Sept. 4 at Baker Bulldog Memorial Stadium.

Baker senior running back Gauge Bloomer, No. 5, had little room to run against the stout Cascade defense on Saturday, Sept. 4 at Baker Bulldog Memorial Stadium.

Cascade's trio of senior running backs, led by Blake Lewis, gained more than 200 yards on the ground during a 35-0 win over Baker on Saturday, Sept. 4. Lewis, who scored three of Cascade's five touchdowns, is pursued here by Bulldogs including Alex Ritter, No. 55, Drake Harper, No. 16, and Tate Powell, No. 32.

Baker sophomore quarterback Paul Hobson throws from near his own goal line on Saturday, Sept. 4 at Baker Bulldog Memorial Stadium.

Less than 20 seconds later, the ball was in Cascade senior Colin Smittle’s arms as he sprinted across the goal line at the other end of Baker Bulldog Memorial Stadium, a handful of Baker players in his wake.

And suddenly the Cougars’ lead was 13-0.

That brief but decisive sequence at the end of the first quarter Saturday afternoon, Sept. 4 doused Baker’s momentum.

And the young Bulldogs, with just six seniors on the roster compared with Cascade’s 15, never regained it.

“I think it was a pivotal moment at that time,” Baker coach Jason Ramos said. “It could be 7-7 instead of 14-0. You never know how the game would transpire if that play had gone a different way.”

The Cougars went on to a 35-0 win in the season opener for both teams on a warm day when smoke from California wildfires cast a dingy pall over the stadium.

Smittle’s 98-yard interception return foiled what turned out to be Baker’s best offensive possession of the game.

Cascade took a 7-0 lead three minutes into the game.

After taking the opening Baker kickoff out to their own 34, the Cougars, who relied heavily on their running game with quarterback Jacob Hage and a trio of running backs, all four of them seniors, marched 66 yards on seven plays, all runs.

Blake Lewis gained most of the ground, gaining 43 yards of four rushes, including a 30-yard rumble to the Baker 9 during which he broke multiple tackles.

Lewis then bulled his way to the 1, and scored on the next play. Smittle’s extra point gave the Cougars a 7-0 led with 9:07 left in the first quarter.

Baker freshman Jaren Long took the ensuing kickoff around the right side and then weaved his way through the Cascade coverage team to give the Bulldogs good field position at their own 42.

Hobson connected with sophomore Hudson Spike on a 19-yard pass, and 15 yards were tacked on for a roughing the passer penalty, moving the ball to the Cascade 23.

But the Bulldogs faced a 4th and 11, Hobson’s pass to junior Tate Powell came up three yards short, and Baker turned the ball over on downs.

Cascade quickly moved the ball back into Baker territory, the big play Hage’s 40-yard pass to Smittle, who broke loose down the right sideline.

The Cougars appeared poised to score again, but running back Rogue Newton fumbled, and Baker senior Drake Harper pounced on the loose ball at the Baker 11 with 4:59 left in the first quarter.

Senior running back Gauge Bloomer, the lone Bulldog who played a major role in Baker’s 38-21 win at Cascade in a November 2019 playoff game, ran for five yards and then took a Hobson pass for four.

Hobson nimbly avoided a fierce Cascade blitz on third down to find Spike for a 14-yard gain and a first down.

Facing another third down, Hobson hit sophomore Malaki Myer on a crossing route for 30 yards, and a late hit penalty on the Cougars moved the ball to the Cascade 26.

Myer took another Hobson pass for 13 yards to the Cougar 12 with 1:36 left in the first quarter.

The next play was Smittle’s interception.

The Cougars took full advantage of the dramatic shift in momentum.

On the ensuing kickoff, Cascade coach Brandon Bennett caught Baker off guard with an onside kick that the Cougars recovered at the Baker 49.

Cascade senior Shawn Kuenzi fumbled but recovered, and on the final play of the first quarter Lewis bulled his way to the Baker 1.

On the first play of the second quarter he took it in for his second touchdown, and Smittle’s extra point gave Cascade a 21-0 lead.

Ramos said the combination of Smittle’s interception return, and Cascade recovering the onside kick, “put us in a hole.”

“Early on I thought we did well to string some plays together and answer their (first) scoring drive,” Ramos said.

After Cascade took the 21-0 lead, Baker gained 43 yards on its ensuing possession but turned the ball over again on downs.

The Cougars, after relying largely on Lewis in the first quarter, shuttled in fellow senior running back Lance Van Hoose in the second quarter, and he promptly went for 27 yards to move the ball deep into Baker territory.

But one play later Van Hoose fumbled, and Harper again recovered, this time at the Baker 21.

On Cascade’s next possession Van Hoose held onto the ball, gaining 48 yards in four carries, including a 28-yard sprint for a touchdown with 3:42 left in the first half. Smittle again booted the extra point, and the Cougars led 28-0.

The Cougars continued their offensive onslaught.

Then Lewis returned, running for seven yards and capping the drive with a 10-yard touchdown run with 37 seconds left in the first half.

With the Cougars leading by 35 points, the second half was played with a running clock. Neither team scored.

Cascade threatened early in the third quarter but Myer intercepted Hage’s pass near the goal line and returned it to the Baker 14.

While the Cougars’ ground attack accounted for the majority of their yards — 274 of 390 — their defense, which emphasized stopping Bloomer, was also stellar.

In Baker’s playoff win over Cascade nearly two years ago, Bloomer, then a sophomore, led the Bulldogs with 95 yards.

But on Saturday, with the Cougars’ front seven dominating the line of scrimmage and allowing the narrowest of running lanes, Bloomer was held to 16 yards on 13 carries in the first half.

Ramos said Cascade had a solid strategy to stifle Bloomer.

“It wasn’t a surprise what they did — that’s what I would do, load the box and force us to make some tough throws.”

Ramos said Baker, which started three newcomers on the offensive line, tried to pave the way for Bloomer but struggled against the experienced Cougars.

“They did a nice job taking away inside running lanes,” he said.

“I thought he did pretty well,” Ramos said. “He made some good throws and then he forced a few. He’s going to work through that. We’ve got to give him more protection.”

Hobson threw a pair of interceptions in the second half.

Ramos said he understands his sophomore quarterback was trying to rally his team from a big deficit, and he’s confident that Hobson, as he gains experience, will recognize times when throwing the ball away is a better option than trying to make a difficult completion.

Myers had four catches for 45 yards. Spike had two receptions for 33 yards.

Baker had 166 yards in total offense, including 72 on the first-quarter drive that ended with Smittle’s interception and return for a touchdown.

Ramos said he believes Baker will not let the opening loss to Cascade — a team he said could be the toughest the Bulldogs face this season — dampen their enthusiasm.

“There will be some positive takeaways from this,” he said. “We need to use this as a learning experience. I don’t think the kids are going to be done. It’s going to motivate them to work hard and get better.”

"There will be some positive takeaways from this. We need to use this as a learning experience."

Greg Hansen: 'Mr. Football' on how Oregon got Rich, where Wildcats went wrong — and Saturday's winner

Steven M. Sipple: No easy solutions to NU’s close-game woes except: You make your luck