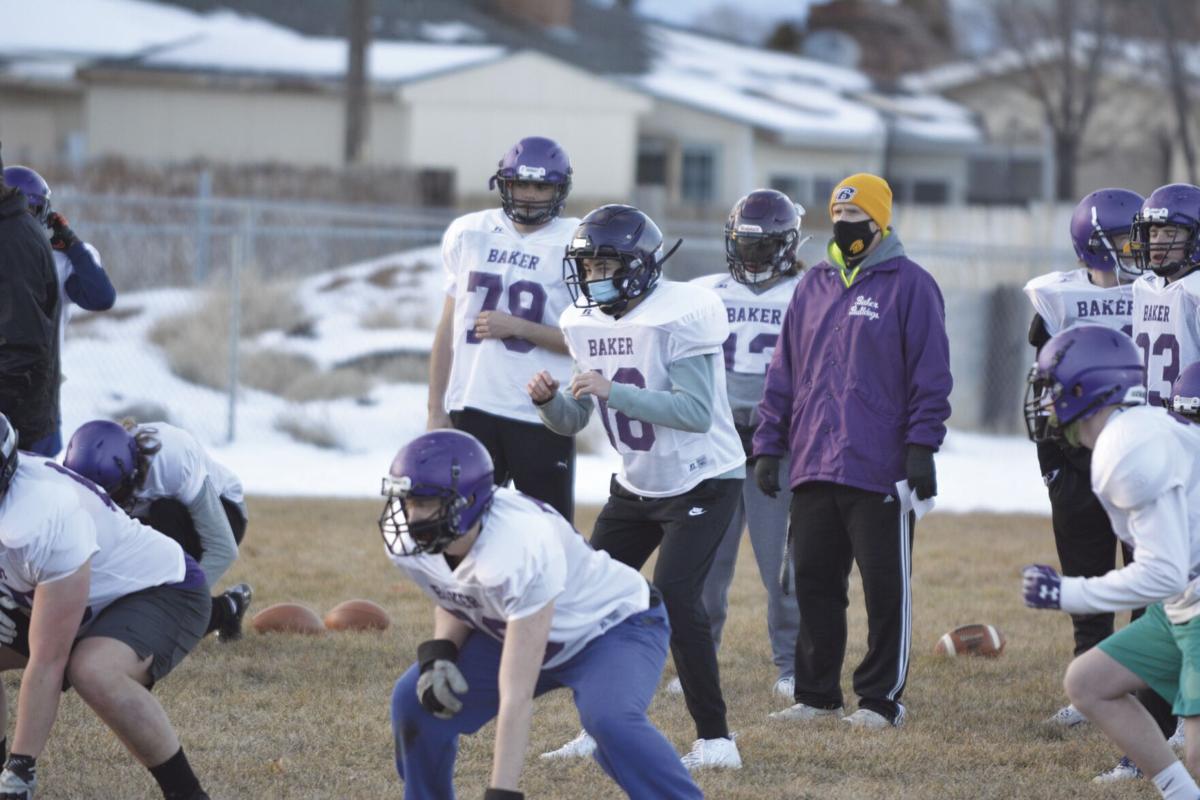 Baker varsity head coach Jason Ramos, in yellow cap, watches the Bulldogs run through a drill during a practice on Feb. 17 at Baker High School. Baker’s first game is scheduled for March 5 at Vale. 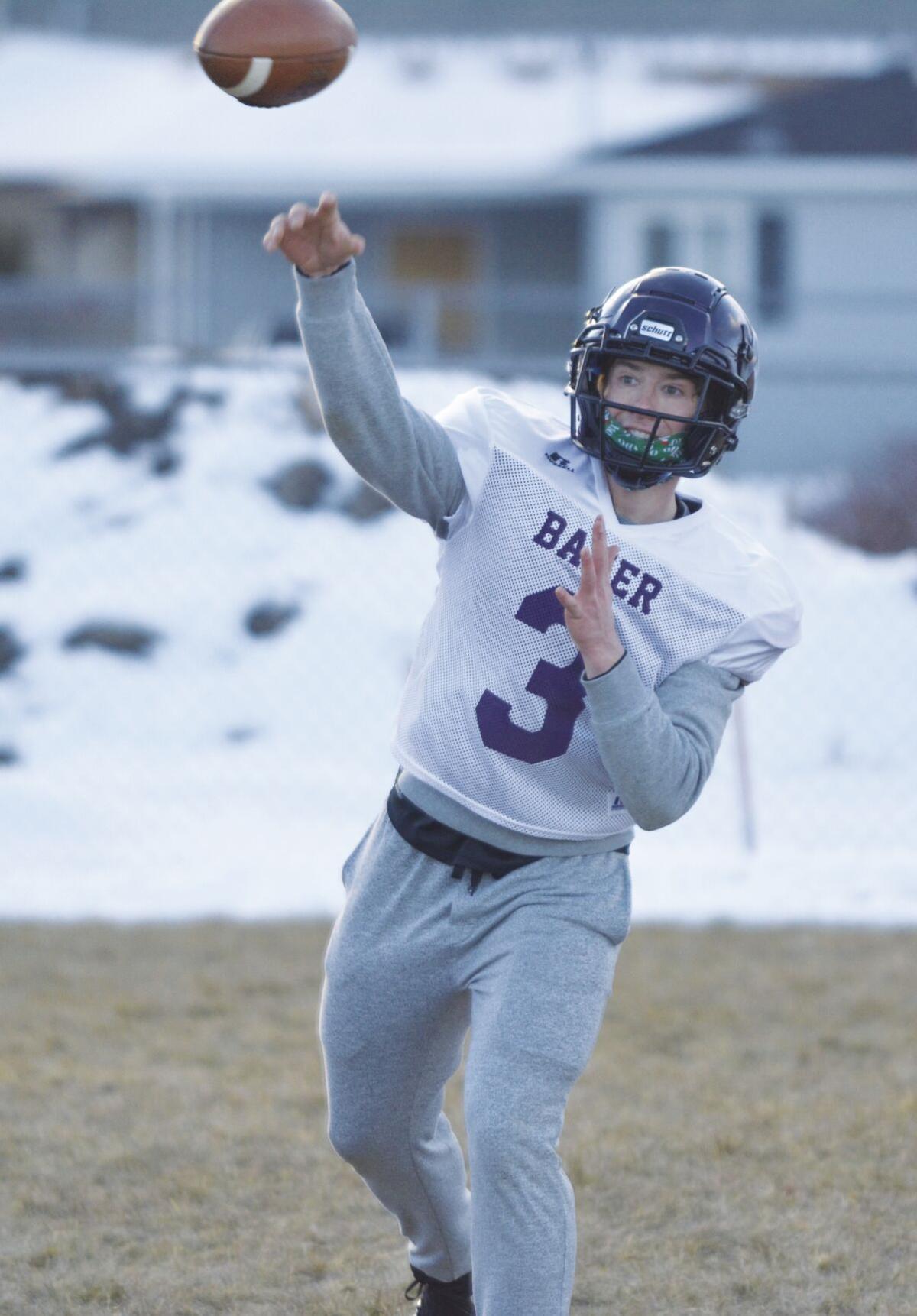 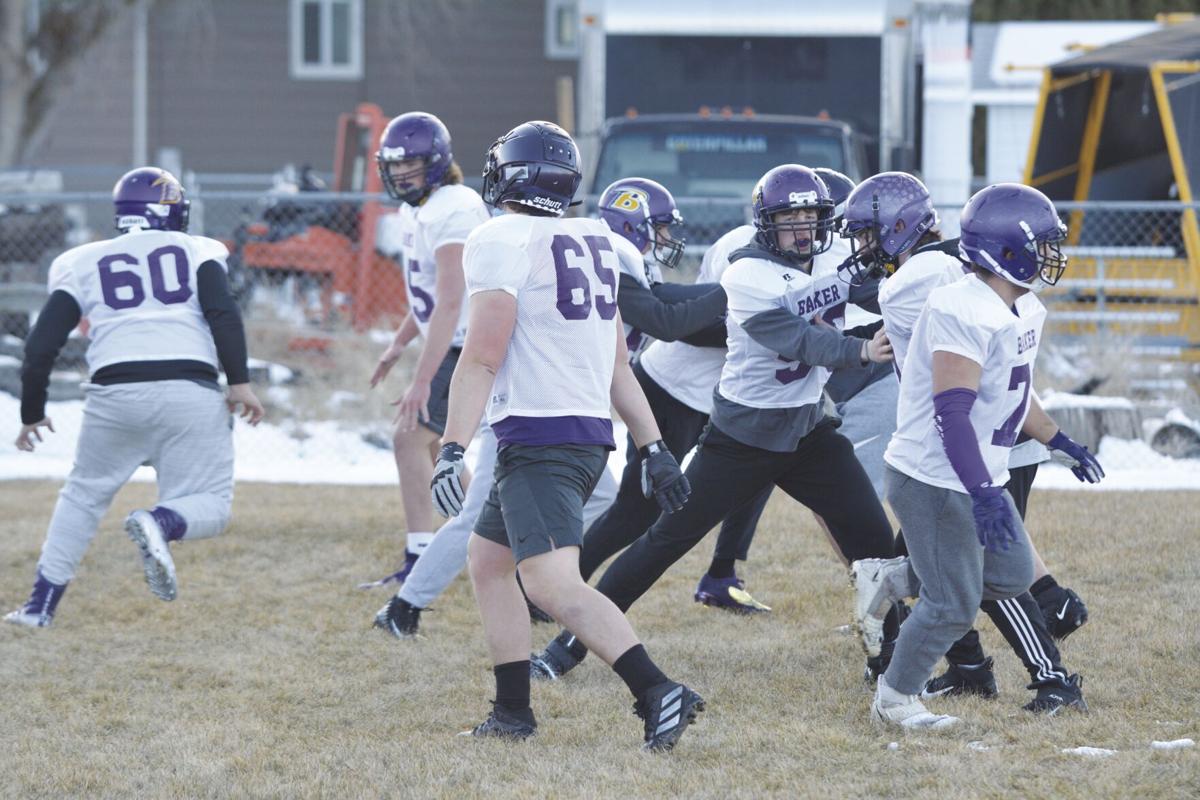 Baker High School football team runs through a drill during a recent practice. 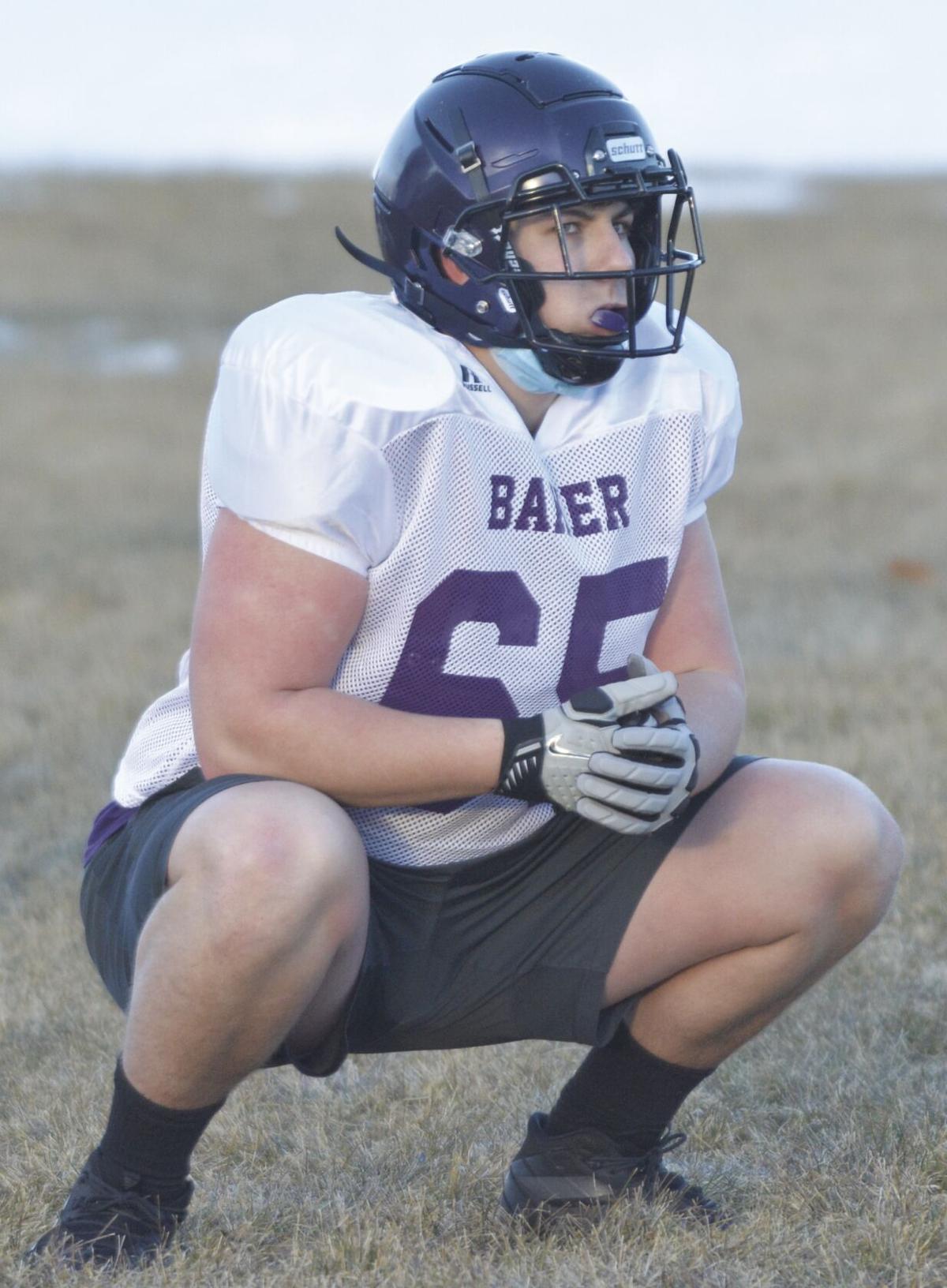 Under the glow of the stadium lights, the Baker Bulldog football players are doing something they haven’t done in well over a year.

They buckle on their shoulder pads, pull down their practice jerseys, don their helmets and run onto the field.

Their excitement is palpable.

“It’s been really nice, I love having the helmet and shoulder pads on,” junior Gauge Bloomer said.

After months of uncertainty, high school football has returned.

Baker started practicing Feb. 15, in preparation for an abbreviated season that includes an opening game set for March 5 at Vale.

“Kids have been waiting for this day, and they are pretty jazzed,” varsity head coach Jason Ramos said. “Regardless of the weather, they are excited to be out, ready to start running into each other again.”

The weather was decidedly different from what’s typical for early practices in a typical season.

Instead of August heat, the Bulldogs had to deal with snow and temperatures near or below freezing.

And instead of preparing for a typical schedule featuring rivals such as La Grande, Baker’s tentative five-game slate so far includes only one Greater Oregon League opponent, Ontario.

But for players, in particular veterans whose last competitive game was a loss at Banks in a Class 4A quarterfinal playoff game in November 2019, the anticipation of playing again makes up for inclement weather and an unusual schedule.

“I think that’s kind of fueling us this year, now that we are out here it’s exciting, we are ready to hit someone in the mouth,” said Mason Van Arsdall, an anchor on the Bulldogs’ lines.

Ramos said he’s not worried about his team dealing with factors such as weather and scheduling.

“We can only control what we can control, and the weather isn’t one of those things,” Ramos said.

“We have some things in mind in terms of football things we need to do, we may need to go under center a little bit, kind of re-work some of our offensive packages,” Ramos said.

Van Arsdall actually sees the snow as an advantage.

“We are out here practicing in the snow, having snowball fights, sledding for conditioning,” he said. “I think it brings us together and makes us better.”

Ramos acknowledges that the truncated schedule does pose a significant challenge for the Baker coaching staff.

“Since we lost some of the lead up preparation we’ve had to kind of rush through things, we have thrown a lot at the kids lately,” Ramos said. “Our older guys are good with it, because they are veterans and they are ready to go. Our younger guys right now, we may be going a little too fast for them right now. We are going to have to be creative on how we structure our practices going forward.”

One of those veterans is senior Gabe Gambleton, a quarterback and slotback.

He said he’s eager to start playing, and to compete alongside his teammates one last time.

“I want to have a great season, go undefeated and have a great time enjoying the last year of football,” Gambleton said.

Bloomer, a running back and linebacker, believes the Bulldogs have a good chance to win all their games.

“I think this year we could go undefeated pretty easily, and I think it will probably happen,” Bloomer said.

Although football is back on the schedule, fans won’t be allowed to attend, at least to start.

Buell Gonzales Jr., the Baker School District’s athletic director, said on Tuesday, Feb. 23, that he hopes to reassess the situation once the season starts to see if it’s possible to have at least limited attendance.

Gonzales said the district has to comply with Oregon Health Authority (OHA) regulations.

So long as Baker County is at the lowest of the four risk levels — which it will be at least through March 11 — up to 300 people, including players and coaches, could be present for any outdoor sporting event.

If the county dropped to the moderate level, the capacity would be halved, to 150 people.

In the interim, Gonzales said, the school district will livestream all home sporting events.

“Our community has always supported and followed us well, supported us well and traveled well,” Ramos said. “We plan on streaming games, and have people available to watch, whatever we can do to have our fans and our parents be there and be supportive as much as possible.”

But regardless of who’s sitting in the grandstand, Gambleton said he’s eager just to play again.

“I can’t wait to get under Friday night lights,” Gambleton said.

‘Under construction’: Work is ongoing for Arizona Wildcats QBs as spring winds down