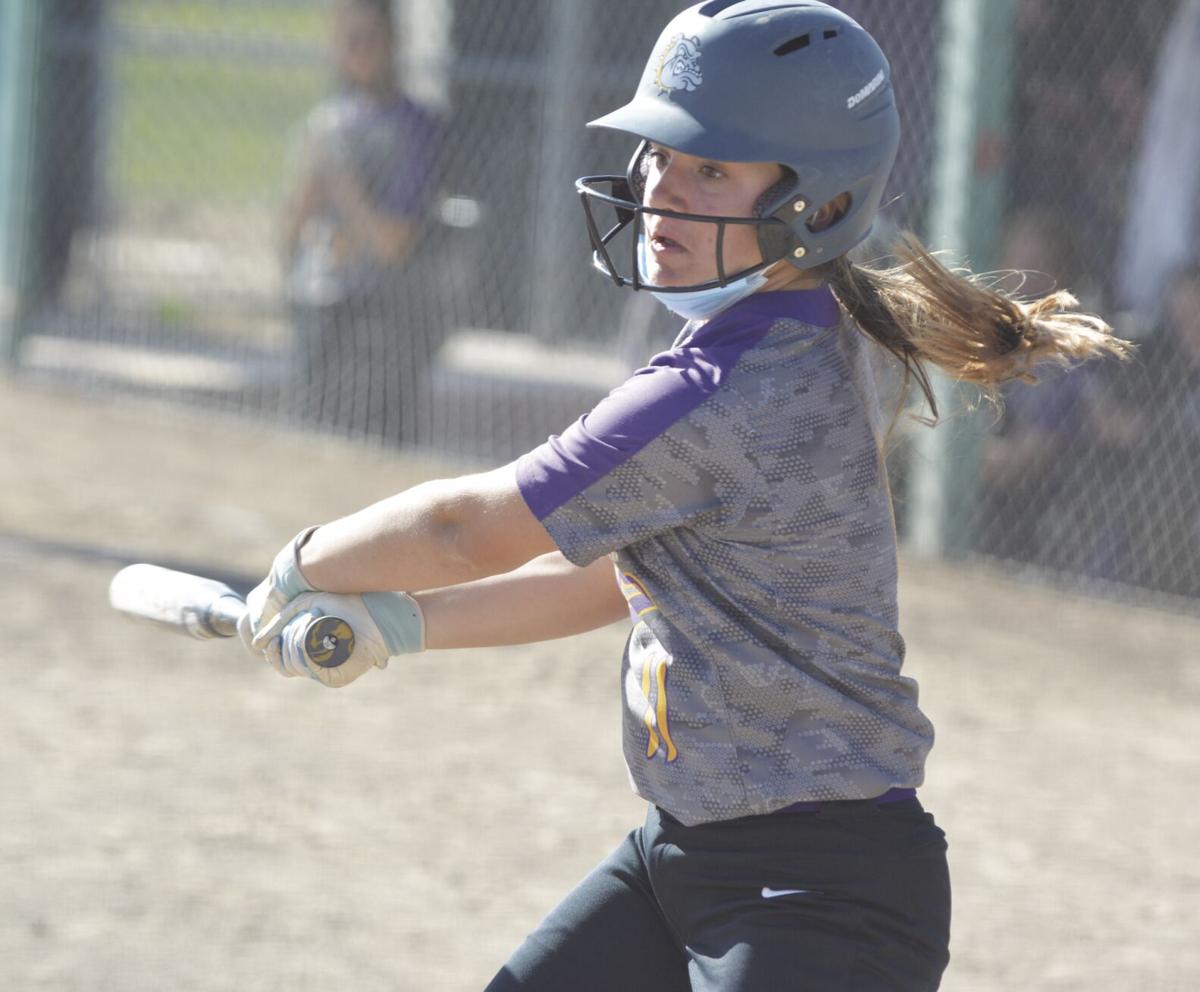 Baker’s Taylor Gyllenberg takes a swing during a softball doubleheader against Ontario on Tuesday, May 4 at the Baker Sports Complex. 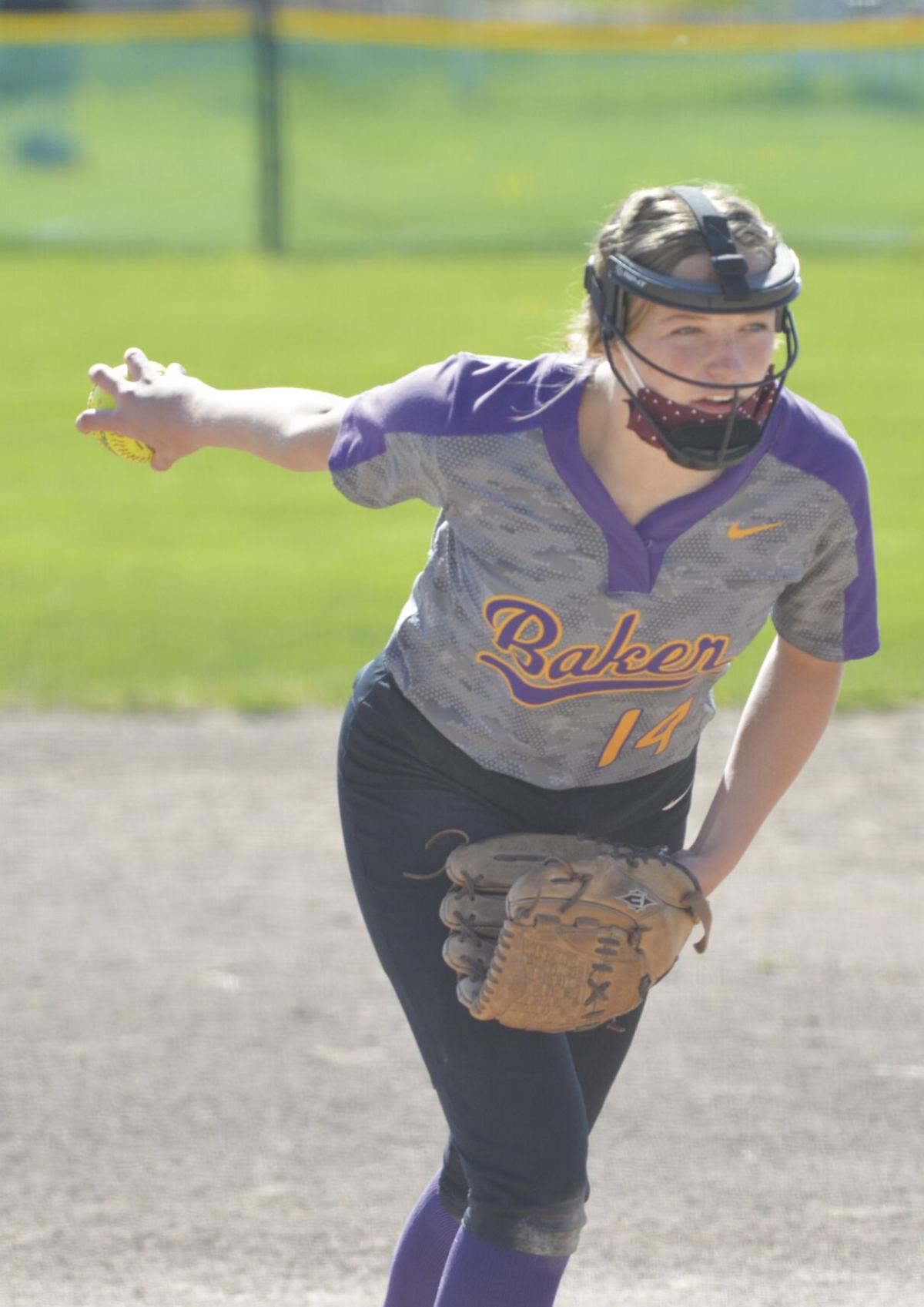 Sophomore Teygan Coley was the starting pitcher in the first game of Baker’s doubleheader against Ontario on Tuesday, May 4 at the Sports Complex.

As the wind blew through the Baker Sports Complex Tuesday, May 4, the Ontario Tigers swept Baker in a Greater Oregon League softball doubleheader.

Although the Tigers took command immediately, with 10 runs in the top of the first inning of the first game, Baker coach Sonny Gulick said he was proud of starting pitcher Teygan Coley’s resolve.

“I thought she played really gritty, considering at the plate and in the field we weren’t doing a really good job supporting her,” Gulick said of the sophomore pitcher.

Outside of a couple of base hits from sophomore Taylor Gyllenberg and Coley herself, the Bulldogs were unable to spark any sort of momentum offensively, striking eight times in the first game.

Ontario scored six more runs in the next two innings and eventually triggered the mercy rule.

In game two, Gulick tabbed sophomore Kaycee Cuzick to pitch, and he was pleased with her effort.

“I thought she did a great job, she threw lots of strikes, and was able to keep us in it through six (innings),” Gulick said. “I really thought Kaycee was going to get us through seven today.”

After putting up three runs in the first, Ontario gained and maintained their lead for game two.

Baker scored its lone run in the sixth inning when sophomore Kaci Anderson crossed the plate, but with Ontario leading by 10 runs the game didn’t move to a seventh inning due to the mercy rule.

“I loved how we changed our mentality for game two, it was obvious we were there to at least have them get us out, not just give an out away,” Gulick said.

He believes that the mentality the Bulldogs developed in the second game should be their goal for the rest of the season.

“It was like watching a different team play, we looked far more grown up in game two then we did in game one, and that was good to see,” Gulick said.

He’s also excited about the potential of a team made of primarily of sophomores, many of whom are playing both junior varsity and varsity.

The two teams combined to win all six of their games last week.

“So many of those kids are playing JV and they’ve got to learn what a win is like,” Gulick said. “Now we just have to figure out how to not make the mistakes that hurt us, so we can find what a couple of wins on the varsity level could be like.”

Gulick is thankful for both his players and their parents for being supportive.

“When you are going through growing pains, and trying to build a program, they’re going to be some rough patches,” he said. “I sure do appreciate the kids and the parents being so positive with how things are going.”

Life in the Red: A four-star, late-June official visitor for the Huskers