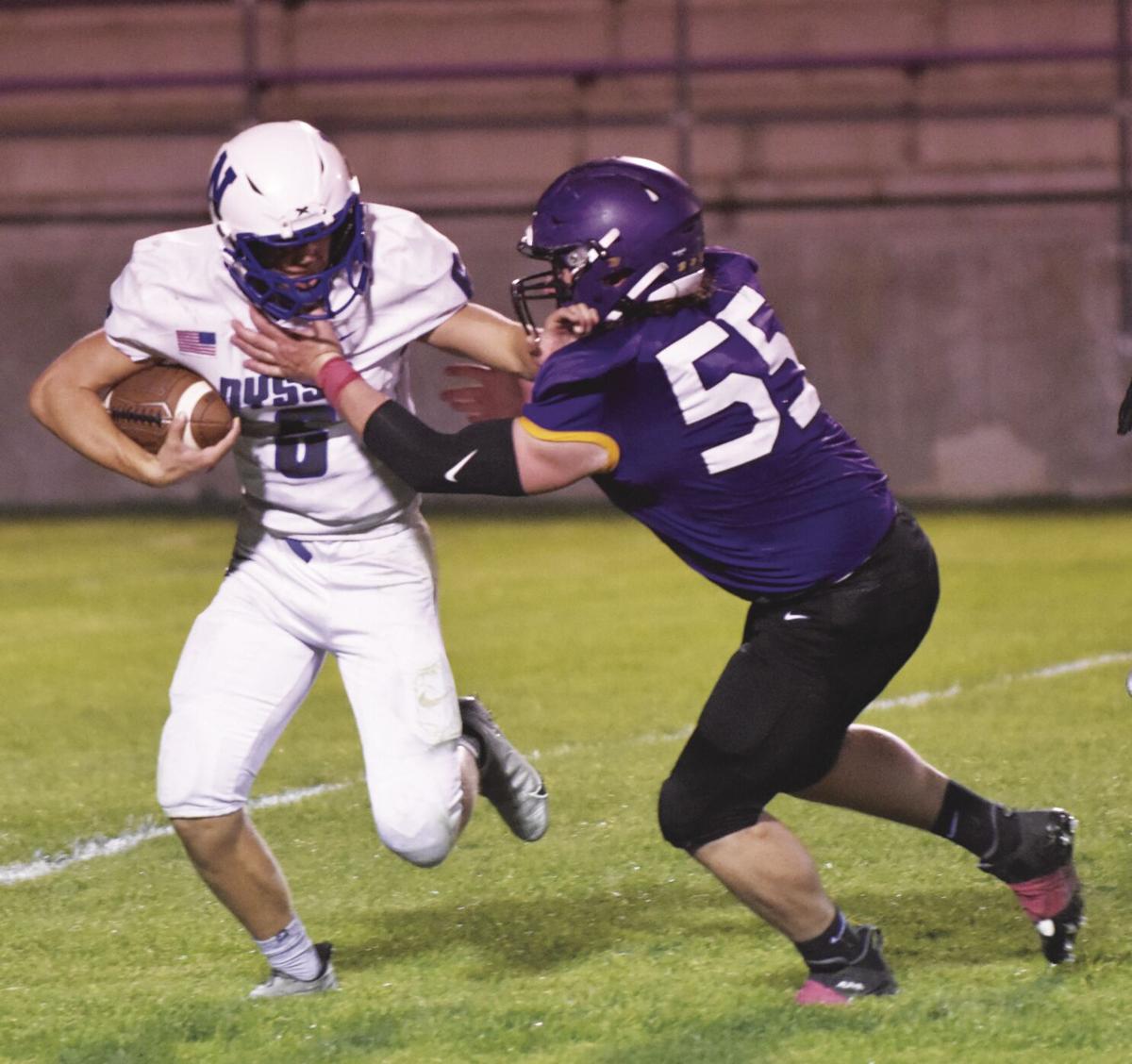 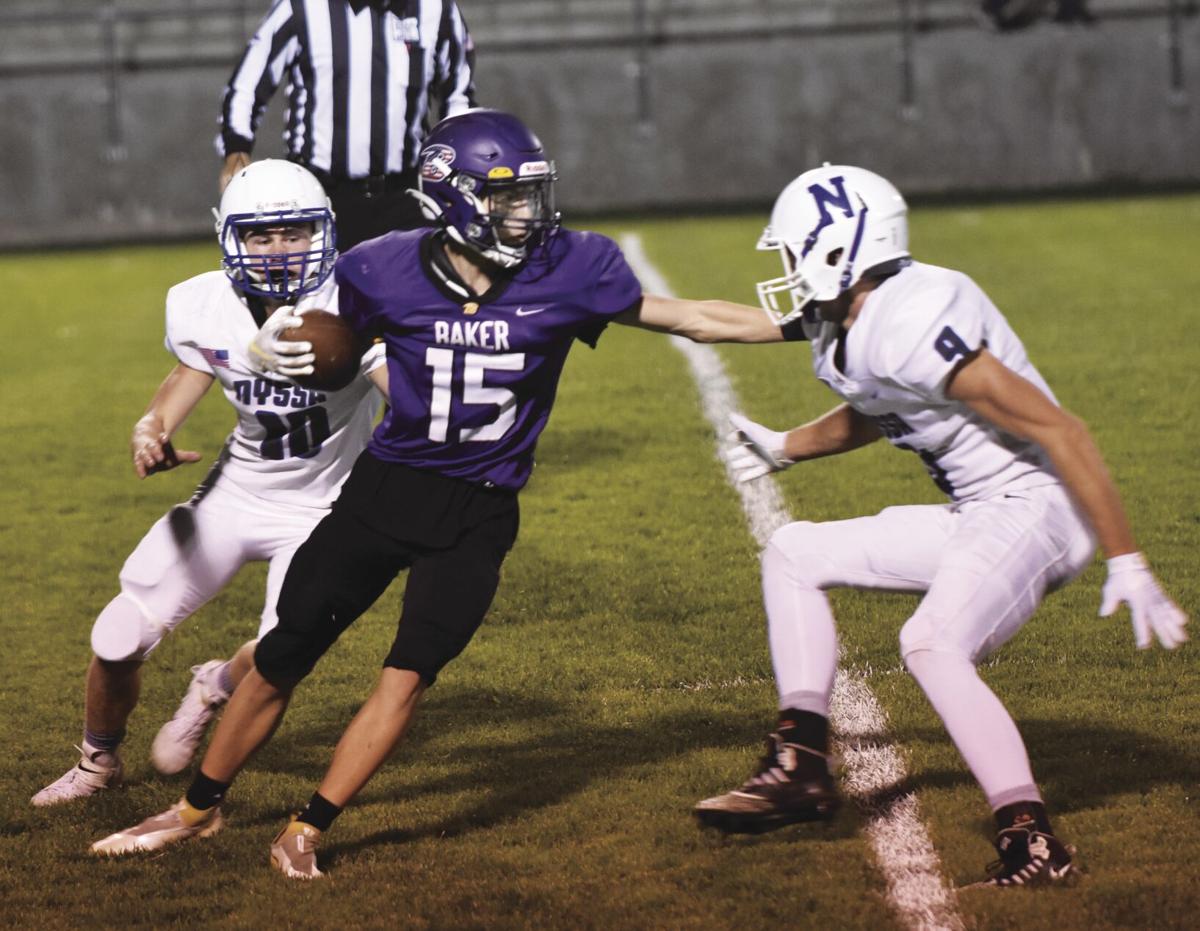 Gauge Bloomer said the Baker football team, sitting in their locker room with a 7-6 halftime lead over Nyssa/Harper Charter Friday night, Oct. 1, had an intense conversation.

“We just said, hey, we’re making plays out there,” said Bloomer, a senior and Baker’s top running back.

The Bulldogs, he said, felt they should have more than the slimmest of leads.

When they left the locker room and ran back to Baker Bulldog Memorial Stadium, they were, Bloomer said, “fired up.”

Their excitement showed on the field — and, after a bit of a sluggish start, on the scoreboard — as Baker dominated the final 16 minutes to take a 35-14 win and improve to 2-3 with its second straight win.

“We’re on a two-game winning streak and we’re feeling good,” said Bloomer, who had 192 yards rushing on 22 carries, including 151 yards on 16 rushes in the second half.

Bloomer had four touchdowns for the second game in a row, repeating the feat from Baker’s 41-0 win over Newport on Sept. 25, when he ran for 195 yards.

On Friday, after Nyssa/Harper tied the score at 14 on Ryan Talbot’s 25-yard touchdown run on a sweep to the right with 4:10 left in the third quarter, Baker dominated.

The Bulldogs scored the next 21 points in a seven-minute span.

Bloomer had two of the three touchdowns — his third and fourth of the game — and Baker took advantage of great field position on each of the three scoring drives.

The worst start was on the first drive, when Jaron Long returned the kickoff to the Baker 49 following Nyssa/Harper’s game-tying touchdown.

Bloomer accounted for all 49 yards, most of it on a 40-yard run on second down when he weaved through the defense to the Nyssa/Harper 11.

Two plays later, Bloomer burst through a gaping hole on the right side of the defensive line for a nine-yard touchdown.

Hudson Spike, who made all five extra points, booted the ball through to give Baker the lead for good at 21-14.

On the ensuing possession, Baker’s Malaki Myer picked off Andrew Enders’ pass. Myer ran the ball back for an apparent score, but his touchdown was nullified by an illegal block penalty on Baker.

The Bulldogs settled for starting at the Nyssa 25. On the final play of the third quarter, Myer caught a five-yard pass from Paul Hobson, who was celebrating his birthday.

The fourth quarter started with Tate Powell running for 10 yards and a first and goal at the Nyssa/Harper 8.

Bloomer then took over again, running for three yards and then plowing into the end zone from five yards out for his fourth touchdown. Spike’s PAT boosted Baker’s lead to 28-14 less than two minutes into the final quarter.

The next sequence followed a similar progression.

Spike’s long kickoff left Nyssa/Harper starting at its own 13. On their third play from scrimmage, Dash Bloomer recovered a fumble at the 13.

On Baker’s first play, Dylon Freeman sprinted off the left side for a touchdown and Baker, with its second touchdown in 95 seconds of game time, led 35-14.

“It’s a momentum thing,” Baker coach Jason Ramos said of the stretch after the Bulldogs broke the 14-14 tie and took control. “When you can capitalize and be opportunistic, it takes the wind out of the sails of the other team.”

Nyssa/Harper threatened to score late in the game, aided by three Baker penalties, but Nyssa/Harper fumbled again and Gauge Bloomer recovered at the Baker 8 with 4:22 left in the game.

Bloomer ran four times for 69 yards on the next possession, including a 50-yard rumble that would have been his fifth touchdown but for an ankle tackle that brought him down at the Nyssa 4.

Hobson then took a knee to run out the clock.

Bloomer credited his offensive line and other teammates for giving him space to run as he neared 200 yards for the second straight game.

“I’m looking for a crease, but it’s my teammates that make the creases,” Bloomer said.

Early Friday, in front of a relatively sparse crowd on a cool, clear and nearly windless evening, Baker seemed destined to run away from the visiting Bulldogs.

Nyssa/Harper had the ball first, and after losing six yards on three plays, they punted. Myer returned the punt to the Nyssa 25, and on Baker’s first play from scrimmage, Bloomer raced to the end zone. Spike’s PAT gave Baker a 7-0 lead less than two minutes into the game.

Baker forced another punt on Nyssa/Harper’s second possession, and Baker started its drive at its own 30.

Baker avoided a turnover by recovering Hobson’s fumble on a sack, and on the next play he found Spike for a 20-yard completion.

But the drive stalled and Baker turned the ball over on downs at its own 48 with 5:48 left in the first quarter.

Nyssa/Harper gained 17 yards but Ryan Richardson fumbled after catching a pass from Enders, and Baker recovered the ball at its own 31.

On the ensuing drive Hobson scrambled and found Spike for 22 yards, but Baker was forced to punt in the final 30 seconds of the quarter.

“We got off to a great start and then we had some of our own unforced mistakes that killed some drives,” Ramos said. “The momentum clearly went back to Nyssa at that point.”

Nyssa/Harper put together its best drive of the game, mostly on the ground with Santiago Miranda, Enders and Landon McDowall. McDowall’s 10-yard reception brought the ball to the Baker 16.

What followed then was the game’s wildest sequence of plays, with fumbles on three straight plays.

Nyssa/Harper fumbled on two plays in a row.

They recovered the first, after a loss of seven yards, but Baker’s Alex Ritter pounced on the ball after Enders was sacked, and Baker had the ball on its own 34 with 6:30 left in the first half.

But on Baker’s first play, Bloomer fumbled and Nyssa recovered at the Baker 44.

Ritter sacked Enders on the next play for a loss of four yards, but Nyssa/Harper then went 48 yards in eight plays, capped by McDowall’s 11-yard touchdown run. The two-point try failed, though, and Baker still led 7-6 with 1:54 left in the half.

Baker drove into Nyssa/Harper territory thanks to Hobson’s 30-yard pass to Spike with 53 seconds left, but Baker turned the ball over on downs and the score remained 7-6.

On the opening possession of the second half, Myer ran the kickoff to the Baker 45, and the Bulldogs took advantage of the good field position.

Bloomer ran for 11 yards, but an illegal motion penalty, a run for no gain and an incomplete pass left Baker facing a fourth and 7 from the Nyssa 42.

Hobson rolled to his right and found Long streaking down the sideline for a 41-yard gain to the Nyssa 2.

Bloomer ran it in from there, and Spike’s kick gave Baker a 14-6 lead with 9:13 left in the third quarter.

Ramos said Bloomer’s performance in the past two games, with eight total touchdowns, is hardly a surprise from the senior.

“We know we’re going to feed him the ball, and eventually he’s going to pop one for a long gain,” Ramos said.

He said Bloomer’s physical running style, and ability to break tackles, tends to wear down defenders as the game progresses.

That was certainly the case against Nyssa/Harper, as Bloomer gained most of his yards — and three of his four touchdowns — in the second half.

Ramos said he was also pleased with Hobson’s performance — 9 of 17 passing for 138 yards and, perhaps most importantly, no interceptions.

“He’s getting better,” Ramos said of his sophomore quarterback. “It’s a progression.”

Defensively, Ramos said Baker largely accomplished the goal he had emphasized during the previous week of practice — controlling the line of scrimmage with the four defensive linemen.

“We did a nice job for the most part,” he said.

After losing its first three games to Cascade, Homedale and Weiser — teams with a combined record of 15-0 — Baker has won two in a row with another home game, against Vale, set for this Friday, Oct. 8 at 7 p.m.

“Hopefully we can keep it going,” Bloomer said.

Ramos said Vale, which is 4-1 with its lone loss 37-12 to La Grande, is a formidable opponent.

“We know they’re going to come out and play hard, as they always do,” Ramos said.

He said the Bulldogs will focus this week on eliminating the self-inflicted wounds — penalties, bobbled snaps and the like — that stifled their momentum at times against Nyssa/Harper and kept the game close until well into the third quarter.

Although the Bulldogs have four games remaining, Bloomer said the last, the Homecoming game against La Grande on Oct. 29, looms in his mind as he finishes his high school career.

“La Grande — they’re our rivals, and that’s what it’s all building up to,” he said with a smile.

Michael Thomas could be a couple weeks away from Saints return: report