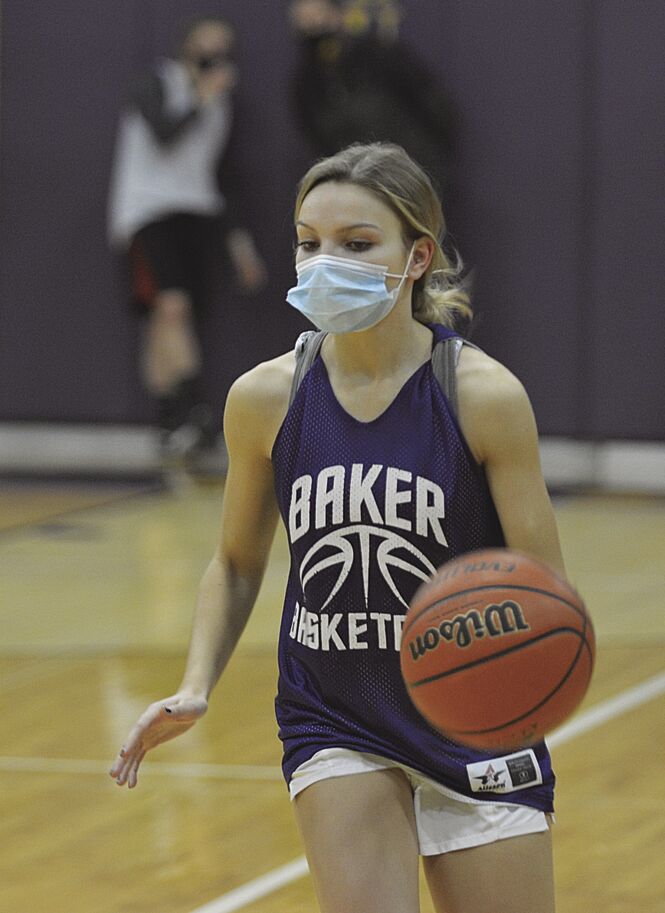 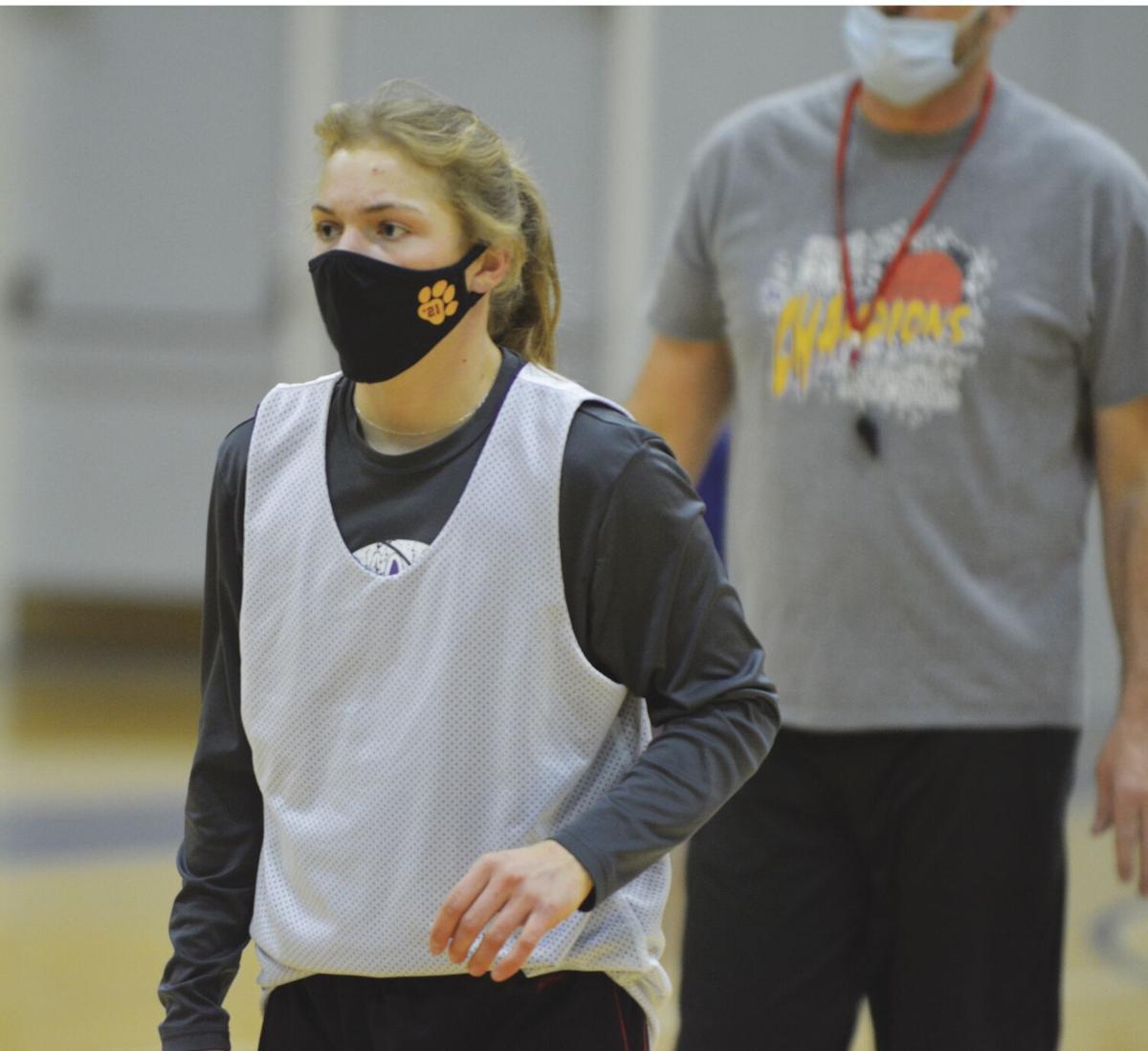 Baker senior Sydney Keller is one of the Bulldogs’ top returning basketball players. Baker coach Mat Sand said of Keller: “She knows her role, she’s so disciplined because she’s a cross-country runner, she’s a very successful wrestler. She is self-motivated more than most and with that she becomes an effective basketball player.” Keller, in addition to being a key player on the basketball team, won an individual state championship in 2020 as a member of Baker’s first-year girls wrestling team. 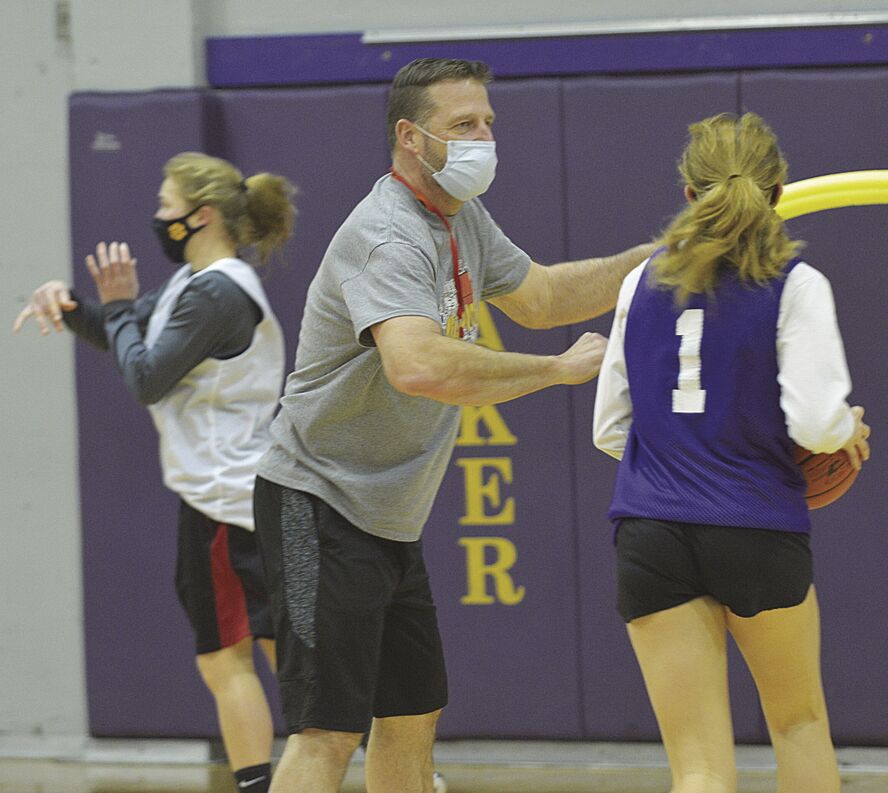 Mat Sand, Baker girls varsity basketball coach, leads players through a layin drill. Though this drill is well-suited to COVID-19 social distancing, Sand said he has been running this drill for years. “It’s something we’ve always done, it just fit in with COVID-19 to keep our spacing, but what it does is whenever you go to the basket like that, there’s always going to be contact, there’s going to be distraction, and you got to teach the players to take that contact, but maintain a focus, maintain a concentration to finish the shot,” Sand said. 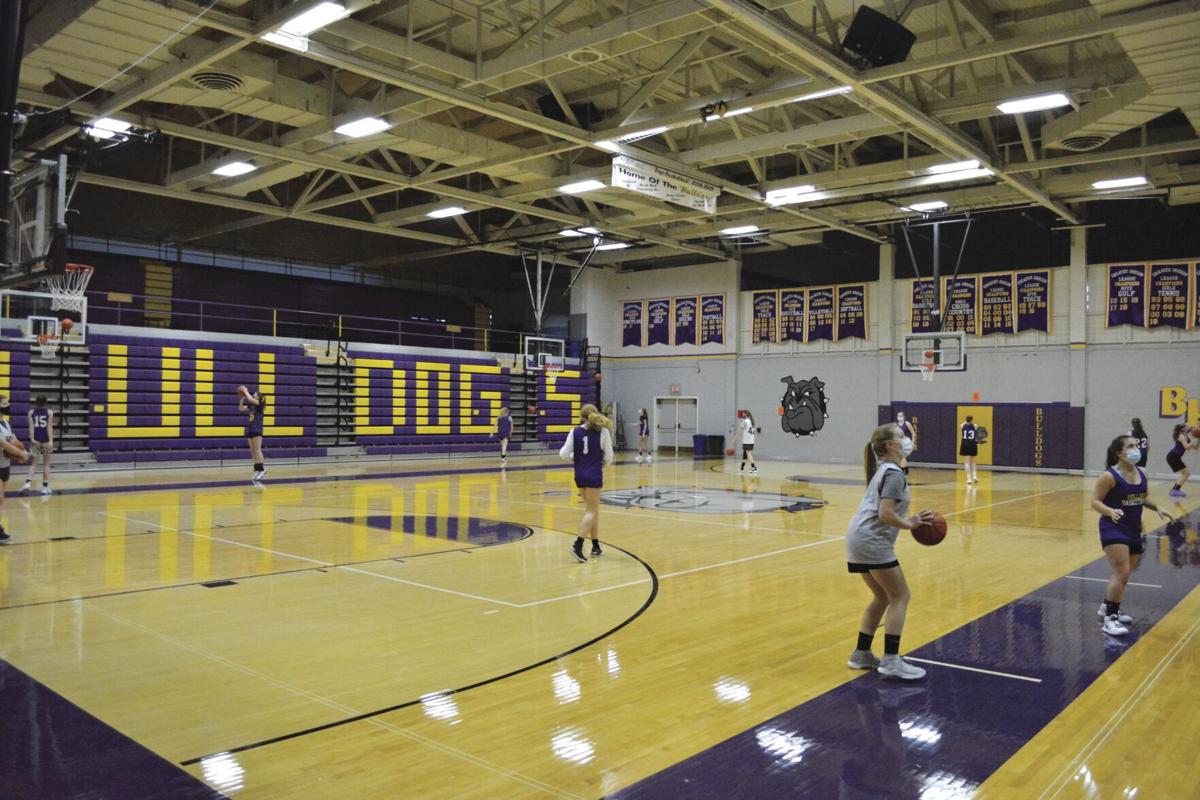 The Baker girls basketball team practices shooting during a recent practice in the BHS gym.

Members of the Baker girls basketball team warm up for a recent practice with a round of stretching. 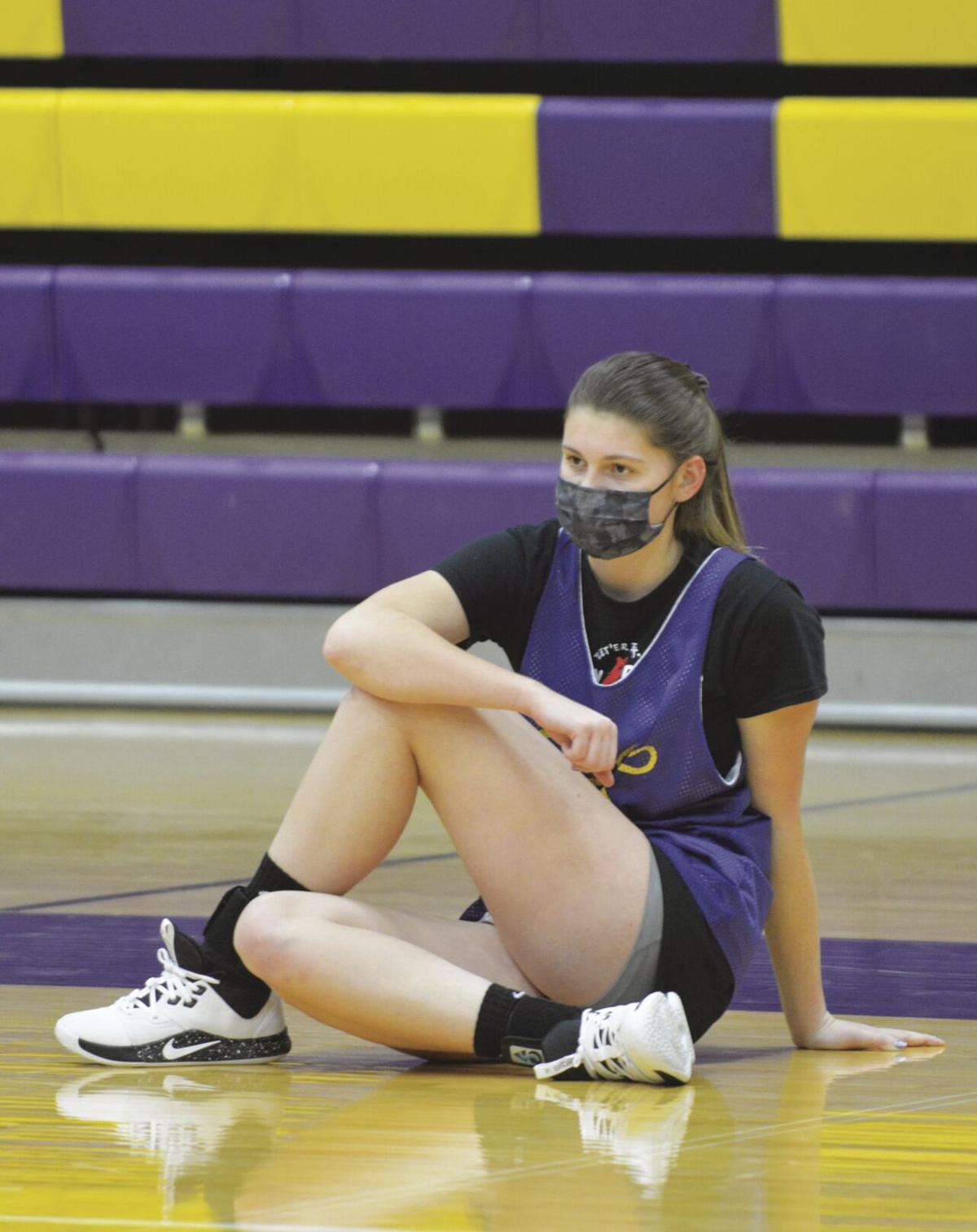 Sophomore post Jozie Ramos stretches during a recent Baker girls basketball practice in the BHS gym. Ramos is one of the Bulldogs’ top returning players. Ten months removed from being a part of the team whose state title aspirations were snuffed due to COVID-19, Ramos was happy to be back with teammates these past two weeks. “It felt really good to just be with people again after not being with people for so long,” she said. 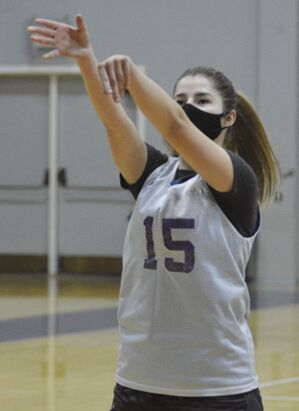 Senior Maggie Mackenzie works on her free throws during a recent practice. 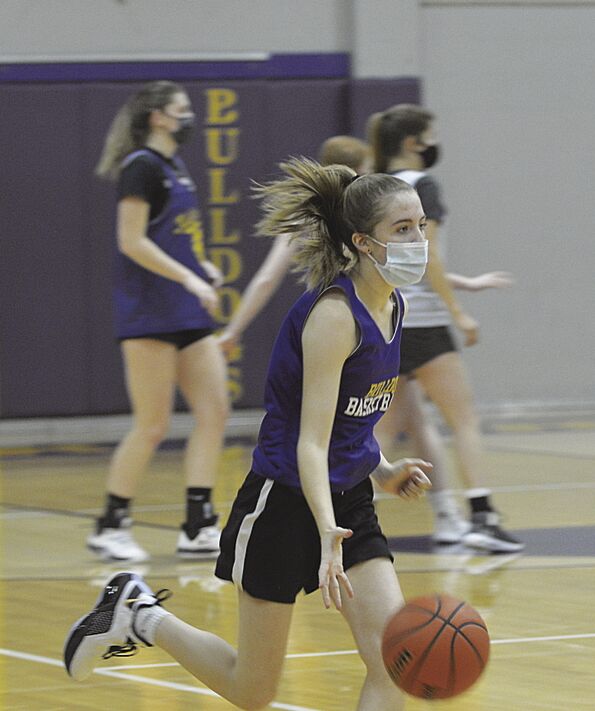 Running from baseline-to-baseline, junior Katie Wilde dribbles the ball down the court in the middle of a drill. 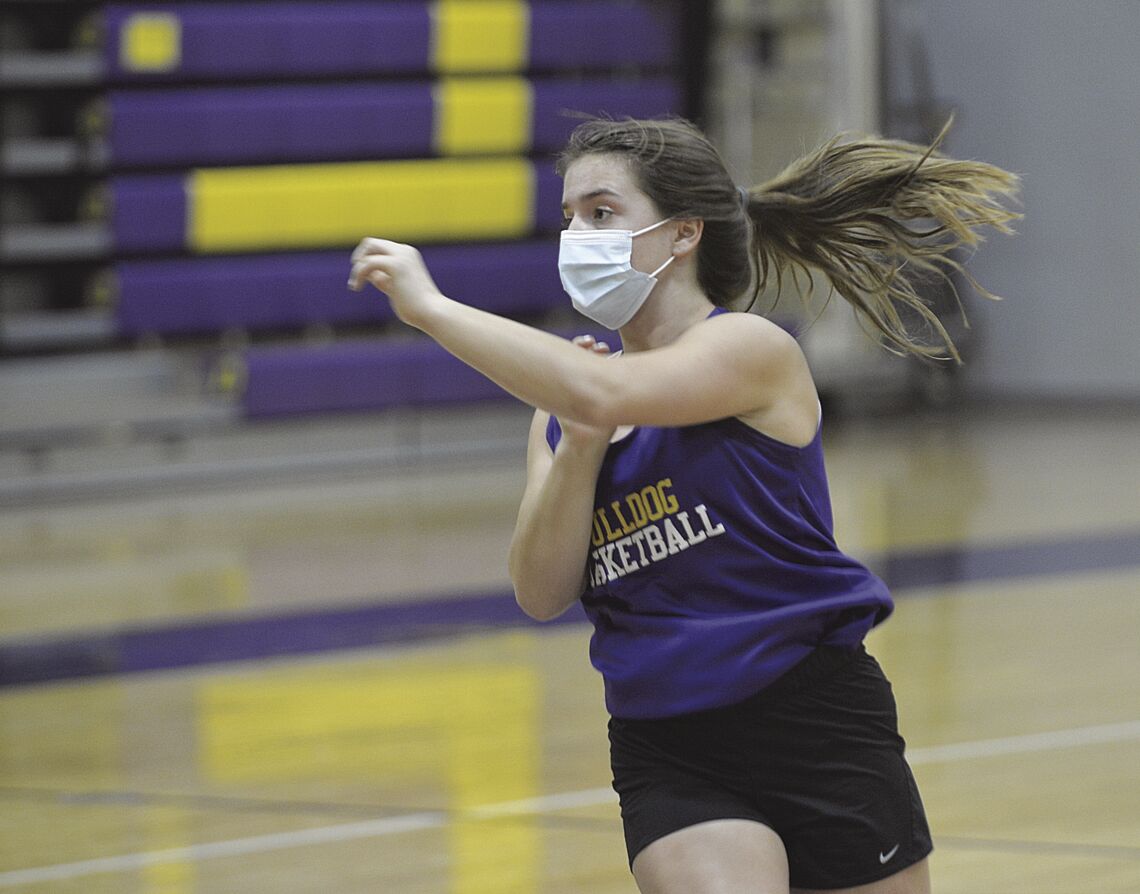 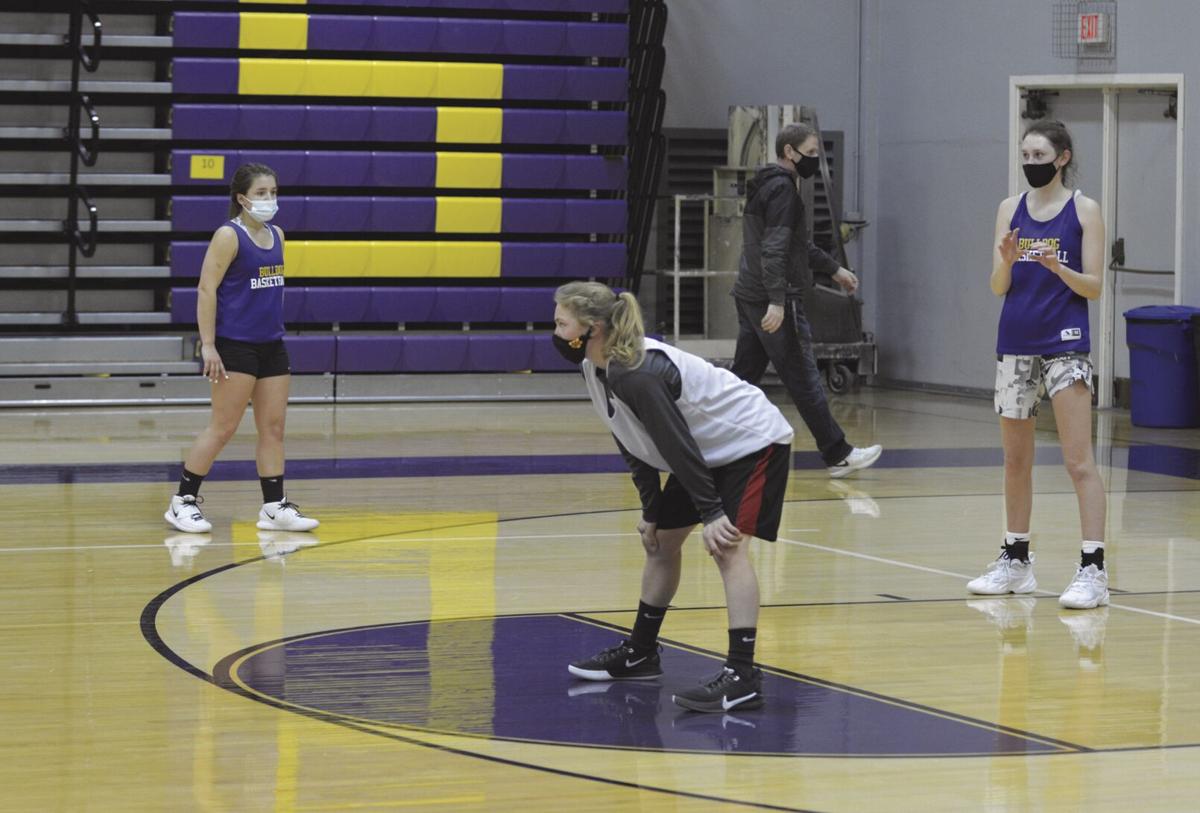 Knowing her younger teammates are watching, senior Sydney Keller, center, knows how important it is to bring competitiveness in her defense. “Defense wins games,” Keller said. “It’s been proven over and over. I’m here to show the younger kids how to play defense and how to play it intensely.” Here Keller works in a drill with teammates Rylee Elms, right, and Taylor Gyllenberg.

Members of the Baker girls basketball team warm up for a recent practice with a round of stretching.

Senior Maggie Mackenzie works on her free throws during a recent practice.

Running from baseline-to-baseline, junior Katie Wilde dribbles the ball down the court in the middle of a drill.

Ten months after its bid to repeat as state champions was stopped by the COVID-19 pandemic, the Baker High School girls varsity basketball team was able to practice again.

For nearly two weeks the Bulldog girls and boys worked out on school grounds while following strict social distancing and mask guidelines.

The next week, while Baker was in Forest Grove, preparing for its first state tournament game, the Oregon School Activities Association (OSAA), prompted by the brand-new pandemic, canceled the tournament, a moment Sand described in an interview as “surreal.”

“It was a real disappointment for the seniors, the community has watched us grow as a program, it’s a program that has gained a lot of traction, a lot of success,” Sand, who is starting his sixth year as Baker coach, said last week. “It’s been fun to be a part of, our support was really really good from our community.”

Baker’s basketball teams were slated to have a one-month mini-session starting in mid-November. But that too was canceled due to a surge in virus cases.

After Baker County dropped into the high-risk category on Jan. 1, the basketball teams were able to start practicing on Jan. 4 at BHS.

Senior Sydney Keller, one of the Bulldogs’ top returning players, was excited to be back on the hardwood, but she quickly recognized how long it’s been since she played regularly.

“It feels pretty great, I’m out of shape definitely,” Keller said. “It’s hard to move quite as quickly compared to last March when we were in end-of-season peak shape. It’s a work in progress, we’re getting there.”

Sophomore Sydnee Pierce was excited to see her teammates again, after missing the family dynamic the Bulldog program emphasizes.

“It’s nice to play with each other again, because we are kind of like family, so being back here and working with each other, gaining that social time for not being here was really nice,” Pierce said.

Although the Bulldogs’ Jan. 14 practice likely was their last for a while, sophomore Jozie Ramos, a returning starter, remains optimistic.

“I thought it was really good practice, and I am just hopeful that we will get back to practicing again soon,” Ramos said.

Sand said that although he too wishes practices could continue, he is grateful for the support the program has received from local residents.

“One of our words from the past has been unity, and part of that unity translates into the situation, in which we have to stay together and focus on each other’s needs from a community to a school,” Sand said. “I’m not just talking about athletes, but students in general. They need to have that acceptance and unity that comes with life. To be together is what it’s all about.”

When the players enter the gymnasium for practice, they are immediately evaluated by the coaching staff for any COVID-19 symptoms, including a temperature check, before being allowed on the court.

Pierce said she enjoys the shoot-around at the start of practice because it prepares her for the next two hours.

“It’s nice, because if we don’t practice for a while, and all of our muscles are tight, so we start with warmups, we say ‘hi’ and get our social time in,” Pierce said.

When practice begins, the team immediately goes into stretching to prepare for the next two hours of situational drills.

One of the loudest voices among the team is Keller’s. She has taken the leadership role seriously, and knows that it is a responsibility she now holds as a team captain.

“Being a team captain it’s a part of our role,” Keller said. “Mat and I have talked about it, it’s just my leadership role for the team, teaching the younger kids what’s expected of them and how to properly warm up.”

Under the current, albeit tentative, schedule from the Oregon School Activities Association schedule, basketball and other traditional winter sports are slated to start on May 10, with games starting about two weeks later and continuing through mid-June. Baker’s first game — subject to change — is at Burns on May 22.

Why the Huskers had been 'actively exploring' a Sept. 4 home game, eventually landing on Fordham